Hurricane Irene dominated the conversation on blogs last week, triggering a passionate debate about whether the news media overhyped the storm that struck the East Coast the weekend of August 28. 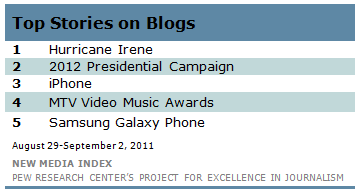 For the week of August 29-September 2, discussion about Hurricane Irene was the No. 1 subject on blogs, according to the New Media Index from the Pew Research Center’s Project for Excellence in Journalism. The majority of bloggers took issue with critics who asserted that the press had overhyped a storm that left more than 40 people dead and caused billions in damage.

Two different pieces criticizing the press for overplaying Irene sparked much of the debate: one came from Howard Kurtz of The Daily Beast and another from Toby Harnden of the Daily Telegraph.

The majority of bloggers strongly disagreed with Kurtz and Harnden’s assessments, citing as evidence the amount of damage done to states such as Vermont and Rhode Island.

A solid minority, however, agreed with Kurtz and Harnden, with some suggesting the press and politicians have ulterior motives for adding to the hype.

“The media coverage of Hurricane Irene was about the worst I’ve seen for any weather event thus far,” decided Jamie Todd Rubin. “Every major weather event needs some kind of name (‘snowmageddon’) and the continuous coverage of sensationalized information verges on parody.”

Another story last week that was popular on several social media platforms was the August 28 MTV Video Music Awards ceremony in Los Angeles. The subject was the leading topic on Twitter, the No. 1 video on YouTube and the fourth-largest subject on blogs. While the online community shared many aspects of the awards show, pop singer Beyonce’s revelation that she was pregnant was the biggest component-so much so that it led to a record usage of Twitter.

On August 28, before the full extent of the damage left by Hurricane Irene was known, media writer Howard Kurtz wrote: “the tsunami of hype on this story was relentless, a Category 5 performance that was driven in large measure by ratings.”

The same day, the U.S. Editor for the Daily Telegraph, Toby Harnden, argued, “Just as with the minor earthquake that shook the east coast last week causing no loss of life and virtually no damage, Irene became a huge story because it was where the media lived.”

While both men acknowledged there is value in having the media warn the public about impending disasters, their assessment of the press performance drew sharp rebukes from most bloggers.

Many argued that the storm deserved the attention it got.

“To the critics who are deriding extensive coverage and thoughtful preparation because the storm wasn’t as bad as it might have been: Shut the hell up,” derided Bill Herman at Shouting Loudly. “Irene was a major storm that came through the heart of the country’s most-populated area…But it actually was a big deal and was covered accordingly.”

“It was, in some respects, every bit as bad as the predictions-just different.” summarized Dan Kennedy at Media Nation.

Charles Apple, on the American Copy Editors Society blog, criticized a Philadelphia Daily News headline asking if the hurricane had been “over-blown” by posting more than 25 pictures of the damage sustained from the hurricane and people trying to escape flooding.

Others decided that even if the press had gone overboard in its coverage, it was better to be safe than sorry.

“There was plenty of stupid about the way the media covered Irene,” admitted Doug Mataconis at Outside the Beltway. “However, as far as warning people of the danger of what was still one of the strongest tropical storms to hit the northeast in generations, it strikes me that Katrina has taught us to err on the side of too much information rather than too little.”

And in a somewhat unusual occurrence in social media, some bloggers defended the actions of the mainstream press.

“If ever there was a time for the media to go overboard, this was it,” explained Jeff Fecke at the Blog of the Moderate Left. “The media and politicians were concerned about a storm that killed dozens and did billions of dollars in damage. That’s precisely what they should be concerned about.”

“I’m not sure why the media is now expected in hindsight to have turned on a dime on Friday night and declared that the danger of a truly devastating storm had passed and everything was now suddenly cool, more or less,” added AllahPundit at Hot Air. “We knew in advance that [New York] city wouldn’t be destroyed, but beyond that no one really knew what was going to happen. How is it ‘hype’ to say under those circumstances, ‘This could still be really bad’?”

But there were some bloggers who agreed with Kurtz’s and Harnden’s critique.

“The ultimate severity of any storm is inversely proportional to the amount of media hype that precedes it,” affirmed Musings from the Den Mother. “Hurricane Irene, which had been downgraded to a category 2 even before it hit North Carolina’s Outer Banks, was but a tropical storm by the time it got to New England…But what we on the upper right of the map actually got wasn’t close to what the talking heads warned is about ad nauseum last week.”*

“Journalists don’t add value by repeating themselves endlessly, but standing in front of random but ultimately uninformative sites where their cameras and trucks happen to be set up (or worse, in the water), by alarming more than informing people,” advised Jeff Jarvis at the Buzz Machine.

And some saw suspicious motives behind the extensive media attention.

“Media and politicians need big catastrophes and emergencies to burnish their images and make them seem important,” explained Wayne Allyn Root at Big Government. “The media loves these bigger-than-life headlines because they are highly profitable. The bigger, the better-It’s all good for business. The more hysterical they can make the public, the higher the ratings. Catastrophes SELL!”

The VMAs were immensely popular on Twitter, registering as the No. 1 subject last week. And the news that Beyonce, the wife of hip hop mogul Jay-Z, was pregnant helped Twitter set a new record. According to the site, at 10:35 p.m. ET, the singer rubbed her stomach on stage following her performance and Twitter responded with a record 8,868 Tweets per second.

“Beyonce’ is finally pregnant 🙂 #congrats to her,” tweeted Jamaisha Jenkins.

The excitement over the show continued the morning after as Twitterers linked to various pictures from the show, including one of Beyonce and another of actress Selena Gomez. They also shared links to a list of award winners.

In the blogosphere the awards were also very popular, finishing as the fourth biggest topic. There, Beyonce’s pregnancy also drew significant interest, as did a report prior to the show that rappers Jay-Z and Kanye West would be surprise performers.

A number of bloggers linked to the live video stream of the ceremony. According to TechCrunch, MTV saw record online viewership of the event, with 2.3 million video streams. They also shared their thoughts about the actions of the stars.

“Lady GaGa seems to be out of girl outfits…so she put on her best drag to open the MTV Video Music Awards,” reviewed Martin Haro at Movie Martin. “Love the song, hate the shtick.”

“New-daddy-to-be Jay-Z and his ‘Watch the Throne’ collab partner Kanye West were surprise performers at the 2011 MTV VMAs,” described The Boom Box. “Jay and Kanye set the stage on fire…we’re sure everyone will be talking about this momentous and unexpected addition to the VMA line-up for days to come.”

On the video sharing site YouTube, the VMAs were also the top draw.

The No. 1 video last week was a report produced by Artisan News that showed highlights of the ceremony. The report focused on the dominance of female artists-including Lady Gaga, Katy Perry and Britney Spears-in the winner’s circle. And it featured clips of Beyonce rubbing her stomach and Lady Gaga appearing on stage as her male alter ego, Joe Calderone.

Trailing the discussion of Irene, the top subjects on blogs last week were a mix of technology news and politics.

The second-biggest topic was the 2012 presidential campaign with a focus on GOP candidate and Texas Governor Rick Perry. Some bloggers linked to a CNN poll showing Perry leading the Republican field, while others highlighted a Politico story that asked, “Is Rick Perry dumb?” The story quotes people assessing Perry’s intellect and claiming that while the Governor is not an “ideas man” and does not show an interest in policy details, he can be an effective politician.

Conservative bloggers complained the piece was a “hit job” on Perry and evidence of a liberal media bias. Perry also was the dominant Republican newsmaker in mainstream media coverage of the campaign last week.

Rumors about Apple’s newest version of the iPhone were the third-biggest subject. In particular, bloggers linked to an Engadget report which closely examined leaked photographs of the new product and speculated on what the gadget will look like once it’s released in a few months.

Following attention to the VMAs, the fifth subject on blogs was a different device-the Samsung Galaxy S II LTE phone which is to be unveiled next week.

Pop culture and technology were the major subjects on Twitter last week. 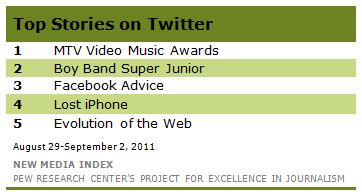 After the enormous attention given to the VMAs, the second-largest topic was a popular Korean boy band named Super Junior. Heechul, one of the group’s singers, has enlisted in the South Korean army. However, the group announced it will continue to perform and promote their music with the remaining eight members.

Suggestions for how to utilize Facebook were the No. 3 topic. Among the recommendations was advice for how restaurants should use the social networking site (“Be transparent” and “Educate your fans”) and tips for businesses on how to handle upset fans (“Be patient and understanding” and “Consider asking the fan to remove the post”).

As was the case on blogs, the iPhone was a major topic on Twitter (No. 4). Twitterers were interested in leaks related to the upcoming iPhone as they linked to reports about a prototype of the phone which was lost in San Francisco. This is the second time that a similar incident has occurred, as an unreleased iPhone 4 was lost last year in a Redwood City bar and eventually sold to the gadget blog Gizmodo, which published details prior to the product’s release.

The fifth biggest topic on Twitter last week was an interactive timeline of the evolution of the web. Created by members of the Google Chrome team, the timeline shows the interplay between web technologies and browsers since 1990.