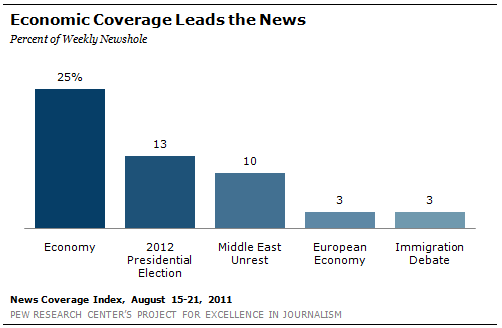 From August 15-21, the economy was the top story, accounting for 25% of the newshole according to the Pew Research Center’s Project for Excellence in Journalism. That marked the ninth straight week the subject has topped the news even as the level of economic coverage dropped for the third consecutive week.

Continued volatility in the stock market accounted for some of the economic stories last week. But the leading storylines involved Obama’s Midwest bus tour focusing on the jobs and the economy as well as news that the president will deliver a major economic address next month.

The 2012 presidential campaign was the No. 2 story at 13%, down slightly from 15% the previous week when the Iowa GOP debate and subsequent straw poll — won by Congresswoman Michele Bachman — dominated coverage. Last week, campaign coverage focused on the buzz around newly minted candidate Rick Perry, who made news with some tough and controversial remarks about Federal Reserve Chairman Ben Bernanke.

For the week, Perry was a dominant newsmaker in 55% of all the election stories studied by PEJ. The next closest Republican candidate, former Massachusetts governor Mitt Romney, was way back at 6%.

The Obama Administration’s call for Syrian President Bashar al-Assad to step down as well as the continued advance of Libyan rebels toward the capital of Tripoli drove coverage of the Mideast to 10% — the highest level since early June. (The reported fall of Tripoli, which could mark the end of Muammar Gaddafi’s regime, occurred too late to be included in this report.)

The fourth-biggest story was the European economy (3%). Coverage was fueled by a meeting between German Chancellor Angela Merkel and French President Nicholas Sarkozy that produced calls for closer European cooperation, but seemed to do little to calm jittery world markets.

The No. 5 story (also at 3%) was immigration policy with attention focused on a White House decision to suspend deportation of illegal immigrants who do not have a criminal record. Given the backdrop of a looming presidential election, some critics characterized the move as a political play for Hispanic votes.

One focus of that coverage was the president’s tour of Midwest states where he talked about the economy and trained some fire on Republicans in Congress. An August 16 report by Fox News correspondent Ed Henry focused on the tougher rhetoric coming from the White House occupant.

“The president continues to focus his punches on Republicans in Congress…demanding they pass trade agreements plus an extension of the payroll tax cut,” Henry reported, adding that on the stump, Obama had “channeled give ‘em hell Harry Truman.”

Another aspect of the coverage of Obama’s bus tour was whether it was about economics or presidential politics.

“When you’re in Iowa, it always feels like you’re on a political trip,” declared NBC’s Chuck Todd in an August 15 report. That story went on to quote some disillusioned Obama supporters, including one woman who said she wanted the president to “show a little more leadership and less compromising.”

As some people were wondering about presidential leadership, word emerged last week of Obama’s plan to deliver a major presidential address on economic policy, perhaps hoping to seize the initiative on that issue.

On August 17, the AP reported that, “Seeking a jolt for a wilting economy, President Barack Obama will give a major speech in early September to unveil new ideas for speeding up job growth and helping the struggling poor and middle class…The president’s plan is likely to contain tax cuts, jobs-boosting infrastructure ideas and steps that would specifically help the long-term unemployed.”

And as was the case the week before, the unsettling roller coaster ride on Wall Street found its way into the economic headlines last week.

On Friday August 19, a CNN report noted a continuing drop in stock prices amid “more fears of a recession. Friday’s trading came after the Dow plunged more than 400 points on Thursday, adding to what had already been steep declines for U.S. markets…World markets dropped for a second straight session, as global economic fears continued to build.”

For the second straight week, the 2012 campaign was the No. 2 story in the mainstream media. That seems to be a clear sign that after weeks of being shoved out of the headlines by the dramatic negotiations over the debt ceiling, the election is once again generating substantial media attention on a regular basis.

And last week, that attention was trained largely on Perry, the tough-talking Texan who only announced his candidacy, after weeks of speculation, on August 13. Indeed, Perry’s ability to attract press interest was part of last week’s coverage.

Michele Bachmann’s Iowa straw poll “victory lap was almost immediately upstaged by the arrival in the state and in the race of Texas Governor Rick Perry,” noted correspondent Gwen Ifill on the August 15 edition of the PBS Newshour. “At a Republican Party dinner in Waterloo last night, Perry worked the crowd as if he had been in the race for far more than just 24 hours. Perry, who didn’t compete in Saturday’s straw poll, explained his late entrance into the race by comparing it to the 16 years it took to marry his wife.”

But with the media spotlight came some very quick vetting of the new candidate. A U.S. News & World Report story, for example,  took aim at some of Perry’s claims of economic success in Texas.

“Perry’s mission is to convince voters that if elected, he can replicate the ‘Texas Miracle’ on a national scale,” the story stated. “But like most things in politics, the details of Perry’s record during more than a decade as governor of Texas aren’t as convincing as the sound bites. In fact, as voters, campaign contributors and key interest groups scour his record, they may notice that he’s not the small-government conservative they want him to be, and that his economic policies are somewhat airy.”

One of Perry’s attention-grabbing moments last week was his statement that if Fed Chairman Bernanke “prints more money between now and the election, I dunno what y’all would do to him in Iowa but we would treat him pretty ugly down in Texas. Printing more money to play politics at this particular time in American history is almost treasonous in my opinion.”

Those remarks connecting Bernanke to treason brought some quick criticism from a number of quarters, including former George W. Bush advisor Karl Rove. In a segment on the August 17 broadcast of MSNBC’s Hardball, Politico’s Julie Mason suggested the controversy around that statement was part of Perry’s introduction to a bigger political stage.

“It’s going to be a fascinating process because he hasn’t been through the ringer of the national vetting,” she added. But that seemed to begin in earnest last week.

Coverage of the continued violence and upheaval in the Middle East hit 10% last week with major developments regarding Syria and Libya. In the former case, it was the tougher line coming out of the U.S. and in the latter, the continued battlefield successes of the rebel forces fighting Gaddafi. The subject generated the most coverage last week, 13%, on the broadcast networks’ news shows.

In addition, a flare-up of violence between Israelis and Palestinians following a deadly August 18 attack near the Israel-Egypt border filled another 1% of the newshole.

The troubles besetting the European economy, highlighted by the Merkel-Sarkozy summit, were the fourth largest story, at 3%. That was followed by attention to the administration’s decision to ease off on deportations of illegal immigrants not deemed to pose a public safety threat, also at 3%. 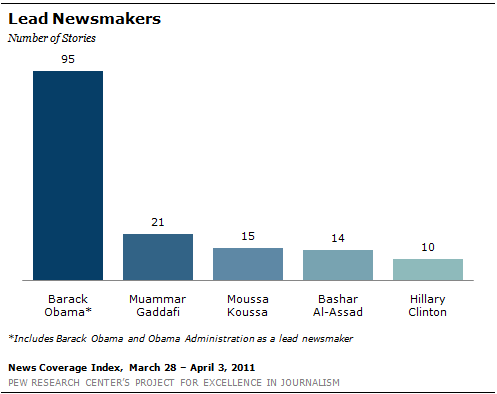 For the week of August 15-21, no one came close to generating as much attention as Barack Obama and Rick Perry. The president was easily the top overall newsmaker, appearing as a dominant figure in 15% of all the stories studied by PEJ last week. That represents his highest level of coverage since the week of May 2-8, when the killing of Osama bin Laden dominated media attention.

The Texas Governor was next, appearing as a dominant figure in 6% of the week’s stories.

Two beleaguered Mideast leaders followed at 1%. One was Bashar al-Assad, whose military crackdown  has thus far been unsuccessful in quelling protests in Syria. The other is Muammar Gaddafi, whose days in power now seem numbered.

The next two newsmakers, both at 1%, both arrested for allegedly perpetrating bizarre and potentially dangerous bomb plots. One was Jared Cano, the 17-year-old Florida youth accused of planning to launch an attack on a Tampa High School. The other was Paul Peters, an Australian man accused of planting a fake collar bomb around the neck of a teenage girl as part of an extortion plot.