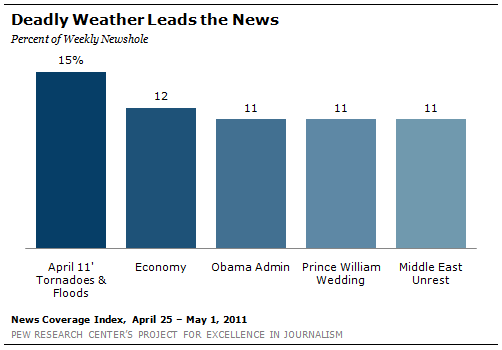 As the debt default clock ticked down to midnight, the state of U.S. economy received even more coverage last week than the near collapse of Wall Street in September 2008.

For the week of July 25-31, the economy accounted for 52% of the newshole, almost all of it driven by the debt debate, according to the Pew Research Center’s Project for Excellence in Journalism.

This was the second-highest level of economic news recorded since PEJ began regularly monitoring the media with its News Coverage Index in January 2007.  The only week with more economic coverage (and narrowly so, at 53%) was March 16-22, 2009, when the public was outraged to learn that bailed-out insurance giant AIG had paid millions in company bonuses.

The burst of media attention punctuated a six-week period during which the economy has utterly dominated the news agenda, accounting for nearly one-third (31%) of all the coverage studied by PEJ through the period. The No. 2 story in during that span, at 6%, was the tabloid hacking scandal that enveloped Rupert Murdoch’s media empire.

The extensive focus on the economy last week also illustrates a trend that has emerged in more than four years of NCI reports. Coverage of economic issues spike dramatically when there is a deadline-driven showdown occurring against a backdrop of partisan warfare.

The largest week of economic coverage in 2010 (40%) was December 6-12, when Obama and the Republicans finally agreed to a deal on the expiring tax cuts engineered by former President George W. Bush. Another big week (47%) occurred from February 9-15, 2009, when Congress passed President Obama’s $787 billion stimulus package after a bitter fight.

Given the dominance of the economic story, the week’s No. 2 subject did not even make double digits. The fallout from the July 22 attacks in Norway that left scores dead filled 8% of the newshole.

From there, it was another drop to a series of stories that each accounted for around 2% of the newshole. The No. 3 subject was the Mexican drug war. Some of that coverage was fueled by the news about a failed ATF program that ended up putting guns in the hands of drug traffickers.

The fourth-biggest story (also 2%) was the war in Afghanistan. One of the top storylines, once again highlighting the continued instability on the ground, was the assassination of the mayor of Kandahar, the nation’s second-largest city.

The No. 5 story (2%) involved a protracted negotiation that was resolved with far less acrimony than the debt ceiling. After a four-month lockout, players and owners in the National Football League agreed on a new 10-year collective bargaining pact.

After three weeks of registering among the top five stories, the Murdoch media scandal accounted for only 1% of the newshole from July 25-31. That was about the same amount of press attention devoted to the presidential race last week, a subject that has been eclipsed by the debt saga in recent weeks.

The economy was pervasive in every media sector last week, ranging from filling 39% of the newshole in online news to 75% in cable news. On the cable and radio talk shows, where ideology and debate take center stage, the economy accounted for 90% of the airtime studied by PEJ.

That coverage was overwhelmingly fueled by the debt debate, accounting for almost 90% of the economic storylines last week. 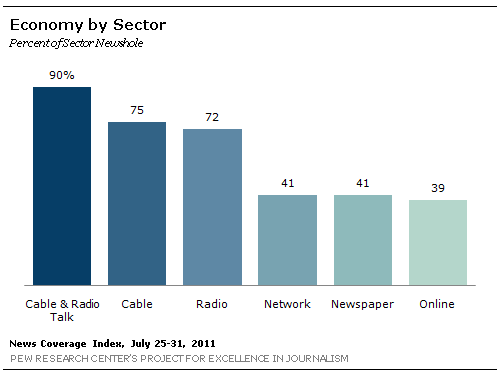 Several different but related subplots emerged. At the outset, the media narrative focused on the hardening battle lines between Democrats and Republicans. “President Obama and House Speaker John A. Boehner escalated their battle over the national debt on Monday pressing their arguments in a pair of prime-time television addresses…” stated a July 26 Washington Post story.

“Obama used his 15-minute address from the White House to urge ‘shared sacrifice’ in tackling the debt, calling for deep cuts in federal spending to be coupled with higher taxes on the wealthy and on large corporations,” the story said.  “Boehner countered with a shorter speech from the Capitol, in which he blamed the fiscal crisis on Washington’s spending and urged deep cuts to cure it.”

As deadlock appeared to deepen, some coverage began homing in on public anger. Introducing the lead story on ABC’s July 26 evening newscast, anchor Diane Sawyer talked of “Americans up in arms” with “frustration boiling over, fed up messages pouring into Congress…flooding the phone lines, crushing the websites.”

Added correspondent Jim Avila” “The masses [are] telling Washington deadlock on the nation’s debt is not acceptable.”

A second significant storyline involved turmoil in the Republican ranks as Speaker Boehner scrambled to convince his conservative colleagues of the virtues of a debt ceiling deal.

An editorial from the conservative opinion pages of the Wall Street Journal noted that “the Speaker has made mistakes in his debt negotiations.” But it added, “If conservatives defeat the Boehner plan, they’ll not only undermine their House majority. They’ll go far to re-electing Mr. Obama and making the entitlement state that much harder to reform.”

“The same message came from more moderate quarters. Speaking on CNN on July 27, commentator and former presidential aide David Gergen warned that Boehner’s speakership was at risk if he could not convince his caucus to sign on to his measure. He described Boehner “as a leader who knows his job is on the line and that if he doesn’t get this, he’s got a runaway caucus and the Republicans lose stature.”

the week wore on, the media also began reporting on the problems Obama was having with unhappy liberals in his party.

On the morning of July 31, just hours before the agreement, the New York Times reported that “however the debt limit showdown ends…President Obama has moved rightward on budget policy, deepening a rift within his party heading into the next election… Mr. Obama, seeking to appeal to the broad swath of independent voters, has adopted the Republicans’ language and in some cases their policies, while signaling a willingness to break with liberals on some issues.”

In the aftermath of the deal between Obama and the GOP, that narrative is likely to continue for a while.

The week’s second-largest story, the deadly attacks in Norway, generated the most attention in the internationally oriented online news sector, where it accounted for 13% of the newshole.

As the country came to grips with the carnage caused by anti-Islamic extremist Anders Behring Breivik, a Wall Street Journal story suggested his views were gaining some traction in Europe.

The story reported that Breivik’s “manifesto against the ‘Islamization of Western Europe’ echoed sentiment that has found a renewed voice on the fringes of mainstream politics from Sweden to Italy. Populist politicians have won votes and influence by arguing that Europe is letting in too many people, especially Muslims…”

The next three stories all accounted for only about 2% of the newshole—news about the raging drug wars in Mexico, violence related to the Afghanistan conflict and the resolution of the NFL lockout. Coverage of all three subjects was modest, but in a week thoroughly dominated by one story, it was enough to propel them into the ranks of the top five. 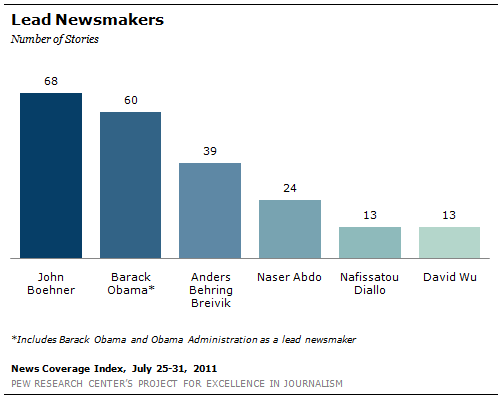 The two central figures in last week’s debt debate were also the top two newsmakers overall from July 25-31. Speaker Boehner was a prominent newsmaker in 7% of the week’s stories (up from 2% the previous week), followed very closely by President Obama, also at 7% (down slightly from 8%). To register as a prominent newsmaker a figure must be featured in at least 50% of a story.

The No. 3 newsmaker, at 4%, was the man who confessed to the July 22 Norway attacks, Anders Behring Breivik. He was followed (at 3%) by Naser Abdo, the AWOL solider accused of plotting an attack on Fort Hood Texas. That facility was the site of a November 2009 massacre, allegedly by a Muslim U.S. Army officer, Nidal Hasan, that took 13 lives.

The next two newsmakers were tied at 1%. One was Nafissatou Diallo, the New York hotel worker who accused former International Monetary Fund head Dominique Strauss-Kahn of sexually assaulting her. She recently granted interviews on the subject to Newsweek and ABC News.  The other was David Wu, the Democratic Congressman from Oregon who announced his resignation last week after allegations he had a sexual encounter with an 18-year-old girl.