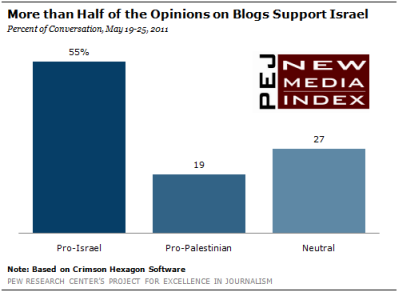 By almost a 3-to-1 margin, bloggers and users of Twitter and Facebook expressed strong support for Israel over the Palestinians in the week following President Obama’s May 19 address on the Middle East, according to an analysis of social media conducted by the Pew Research Center’s Project for Excellence in Journalism. Many of those expressing support also took President Obama to task for suggesting that peace in the region would best be achieved by creating a Palestinian state based on 1967 borders.

Only a small percentage of the conversation was neutral as most users shared strong opinions about the difficult issues involved in the peace process.

In the seven days following Obama’s speech, fully 55% of the conversation on blogs on the issue has been in favor of Israel and opposed to a move to the 1967 borders, while 19% has been in favor of the Palestinians and the creation of an independent state. About a quarter, 27%, was neutral.

On Twitter and Facebook, the tone of conversation was similar with 60% pro-Israel compared to 20% pro-Palestinian and 20% neutral.

These are the results of a special edition of the New Media Index from the Pew Research Center’s Project for Excellence in Journalism, utilizing computer technology from Crimson Hexagon. Based on more than 48,000 blog posts and 430,000 posts on Twitter or Facebook, this report goes beyond the normal methodology of PEJ’s index of new media to look at the specific themes and tone of the online conversation related to the Israeli/Palestinian conflict. 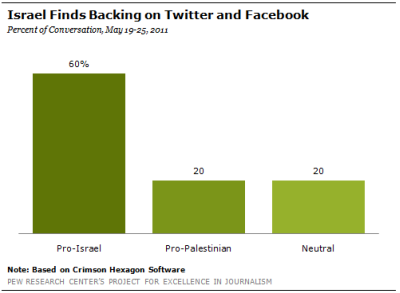 (The regular weekly list of most linked-to news stories on blogs and Twitter, and a write-up of the top news videos on YouTube, is available here. In that analysis, which focuses on links to specific news stories, the Israeli-Palestinian conflict was not as prominent.)

Social media users who sided with Israel criticized Obama for not backing the U.S. ally strongly enough and consequently not upholding American values. Many used phrases suggesting Obama had "thrown Israel under the bus" or "stabbed Israel in the back."

Supporters of the Palestinians were mostly critical of Israel’s actions and declared that Israel continues to be an occupying power backed by the U.S. Some were critical of Obama for backing Israel too strongly and not supporting Palestinians they saw as fighting against colonization.

Only about a quarter of the conversation identified on blogs, Twitter, and Facebook on the subject was neutral. This was slightly less than the 28% found in a PEJ analysis of social media regarding the 2010 controversy over the "Ground Zero" Mosque using Crimson Hexagon. It was significantly less than an analysis of election night 2010 where 41% of the messages on Twitter were "neutral." Other analysis of social media debates, in testing the coding software, also found higher levels of neural discussion. In those cases, social media were used more often to pass along straightforward news accounts. This past week, though, in talking about this most recent discussion of the Israeli/Palestinian conflict, social media users focused more on expressions of opinion.

The pro-Israeli tone of conversation also stayed relatively constant throughout the week examined. On blogs, the ratio of support for Israel over the Palestinians was virtually the same on May 19, the day of Obama’s speech (55% to 19%), as it was on May 25 (54% to 20%).

On Twitter and Facebook, there was a small change over time away from the pro-Israel position, but not enough to see a significant change in the overall makeup of the conversation. On May 19, 62% of the discussion was pro-Israel compared to 20% pro-Palestinian, while a week later the makeup was 54% to 23%.

Some users of social media expressed clear and straightforward support for Israel.

"We must stand with Israel," tweeted Vicki Shroyer.

"When we say never again. We mean never again. Israel always reserves the right to defend itself," added Adriana RM.*

A few were critical of Palestinians.

"Many many younger Palestinians have been indoctrinated to think Israel is horror while Hamas practices terror everyday," declared Anna Teresa Arnold.

Some bloggers, who have more space to expand on their thoughts than Twitter users, explained why they felt the U.S. needed to maintain a strong alliance.

"There are many who believe that prosperity in the United States since the end of World War II is undeniably tied to our love for Israel," wrote Bill Steensland. "We have been a consistent blessing for the Jews who returned to their land and became a nation once again in 1948. If that is true, and if we walk away from our love of Israel, our prosperity will decline as does our love for Israel."

But most of all those in favor of Israel’s position criticized Obama’s declaration of land swaps and a return to earlier borders. Many contended the president was betraying Israel.

"Obama promised 2 stand w/ Muslims when the political winds turn ugly so are we really surprised when he knifes Israel in the back?" tweeted Glen Spicer.

"Israel’s Prime Minister gives Obama a straight up no on moving their borders! Why should Israel have to make sacrifices for peace in the middle east when they are not the problem?" asked Alex Andronicos on Facebook.

"dear israel: obama does NOT speak for most americans with regard to your country’s safety and future," tweeted Brooks Bayne.

"I watched in horror Obama’s speech yesterday where he literally threw Israel to the Middle Eastern wolves encircling her," wrote Terresa Monroe-Hamilton on the blog New Zeal. "Our President has betrayed our largest, closest and last real ally – Israel… Israel’s enemies would literally be able to drive her into the sea as they have threatened for so long. Obama sided with the Palestinians, but Americans don’t and they don’t side with their President. We are sickened by his weakness and by his treachery."

Even on Twitter, a platform on which users often pass along new information by linking to breaking news stories, many of the links were to stories with opinionated headlines rather than neutral statements of fact.

Many highlighted an Associated Press story by retweeting the message: "Romney: Obama ‘threw Israel under the bus’ n (AP)n: AP."

Others linked to a Reuters newsflash: "Israel cannot return to "the indefensible 1967 line" – Netanyahu."

Most of those who supported the Palestinian viewpoint did not so much defend Obama’s speech as criticize Israel’s past actions and the role the U.S. played.

"Bibi [Israel’s Prime Minister Benjamin Netanyahu] also forgot to mention how many Gazan civilians the Israeli army killed after the 2005 withdrawal," tweeted Lisa Goldman after Netanyahu spoke to a joint meeting of Congress.

"The US provided Israel with 670 MILLION weapons between 2000-2009 in order to maintain occupation & colonization," charged Brian, aka The Brinos.

"For decades the Israelis have played for time to create irreversible facts on the ground that would help make the occupation permanent," argued Stuart Littlewood on Redress Information & Analysis. "It seems he’s pushing for another dragged-out peace process to buy Israel even more time to complete its Greater Israel expansion programme."

Like many of the supporters of Israel, some of those that backed the Palestinians criticized Obama, but for very different reasons.

"America’s short- and long-term interests in the region have always been control of oil resources, securing US profits, and defending Israel," wrote Columbia University Professor Joseph Massad on the Al Jazeera web site. "Until ‘winds of change’ blow on these interests, the position of the United States as the most powerful anti-democratic force in the Arab World will remain the same, Emperor Obama’s speeches notwithstanding."

And a few tried to rebut criticism of Obama from conservatives by comparing his policies to those of Republican presidents.

"With all the hysteria, blather, and ahistorical idiocy in the political rightnutosphere over Barack Obama supposedly ‘throwing Israel under the bus’ for, essentially, reiterating what U.S. policy towards the Israeli-Palestinian situation has been for decades, you’d think that Republicans were pristine when it comes to being ‘pro-Israel’," explained lowkell at Blue Virginia before describing conflicts between the U.S. and Israel over the past 30 years. "I also wanted to remind people of the good ol’ days when Republican Presidents like Reagan, Bush and Bush, were busy ‘throwing Israel under the bus.’"

This special edition of the NMI adds software technology from Crimson Hexagon to PEJ’s ongoing tracking of most linked-to news stories in social media. Using this software, the Project can examine a much larger mix of social media conversation.

To see the results of PEJ’s normal NMI methodology for the week of May 16-20, click here.

According to Crimson Hexagon: "Our technology analyzes the entire social internet (blog posts, forum messages, Tweets, etc.) by identifying statistical patterns in the words used to express opinions on different topics."  Information on the tool itself can be found at http://www.crimsonhexagon.com/ and the in depth methodologies can be found here http://www.crimsonhexagon.com/products/whitepapers/.

The time frame for the analysis is May 19-25, 2011, which is different than the normal NMI week, Monday through Friday.

For the analysis of blogs, Twitter and Facebook, PEJ used the following list of keywords in a Boolean search to narrow the universe to relevant posts: