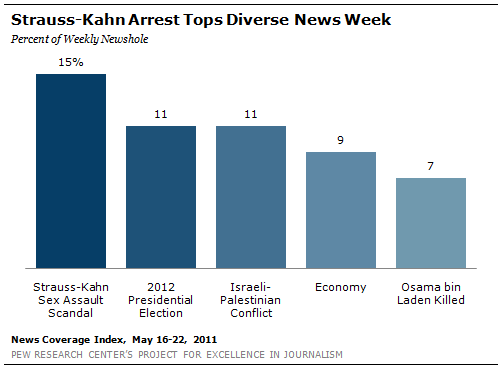 An alleged sexual assault with international ramifications was the No. 1 topic in the mainstream media last week. But two other stories connected to domestic politics combined for nearly a quarter of the newshole, as coverage of the 2012 presidential campaign reached a high water mark.

From May 16-22, the No. 1 story (at 15%) was the May 15 arrest of International Monetary Fund head Dominique Strauss-Kahn on rape charges, according to the Pew Research Center’s Project for Excellence in Journalism. The stunning news about the man the media quickly dubbed “DSK” had news organizations chronicling every bounce in his fall from grace.

With Donald Trump and Mike Huckabee opting out of the race and Newt Gingrich getting in, the presidential campaign was the No. 3 story, accounting for 11% of the newshole and reaching double digits for the first time. As usual, it received more play on cable (24%) and radio (20%), two sectors where political debate and opinion tend to dominate.

The No. 2 story was about an international situation, but it also took on domestic political overtones. Coverage of the Israeli-Palestinian conflict (11%) was marked by President Obama’s May 19 speech on the Mideast that was quickly condemned by Republicans—thus setting up one of the foreign policy battles for 2012. Last week marked the most media attention to the Israel-Palestine situation since May 31-June 6, 2010, when Israel’s interdiction of a flotilla headed toward Gaza, which resulted in the deaths of nine people, filled 13% of the newshole.

The week’s fourth-biggest story was the U.S. economy (9%), with the media continuing to monitor the debate in Washington over spending, triggered anew by the federal government officially hitting its debt limit on Tuesday.

Finally, the death of Osama bin Laden continued to make news at 7% of the newshole. But it is quickly falling off the media map. One week earlier, the subject had filled 24% of the newshole, which was down dramatically from 69% three weeks ago.

The 2012 Campaign: Two Departures and a Rocky Start

The slow but steady ascent of the 2012 campaign in the media’s agenda can largely be attributed to the winnowing down of the field of possible GOP contenders. Last week’s election coverage focused on two Republican hopefuls who decided not to run and one who recently jumped in. As for that candidate, former House Speaker Newt Gingrich, it was a rocky stumble—or series of stumbles—into the race.

On Monday, the media were still parsing through the implications of former Arkansas Governor Mike Huckabee’s decision not to run for president. Huckabee announced live on his May 14 Fox News Channel program that he would not run, despite most polls showing him with about a quarter of the Republican vote.

ABC’s Jonathan Karl on Good Morning America suggested that the announcement brings the Republican Party back to square one: “Huckabee’s decision takes a big-name Republican out of the running and leaves the Republicans exactly where they have been—without a clear choice to take on Barack Obama.” Karl described the Republican field as one “crowded with candidates, and problems.”

Also on Monday, another contender, developer  Donald Trump—who had generated considerable media attention for his blunt policy pronouncements and questioning of Obama’s citizenship—announced he would not run, prompting media outlets to weave in some variation of “you’re fired” into their leads. That was a reference to Trump’s NBC reality TV program, The Apprentice.

Gingrich, another candidate with a knack for making news, formally entered the race with a Twitter announcement and Youtube video on May 11. And two days later, he raised eyebrows in a speech where he derided Barack Obama as a “food stamp president.”

It was one thing for Gingrich to anger critics on the left. But on May 15, in an interview with David Gregory on NBC’s Meet the Press, he offended the GOP base by criticizing the Medicare overhaul advocated by Republican Rep. Paul Ryan, as “right-wing social engineering.”

MSNBC’s liberal host Rachel Maddow offered her own view of the consequences on her May 17 program: “Newt Gingrich has been, this week, all but thrown out of the Republican Party, let alone the list of credible presidential contenders after he criticized the Paul Ryan ‘kill Medicare’ plan.”

After receiving flack from the right, Gingrich backpedaled, even calling Ryan to apologize.

Nevertheless, some damage was done, and Gingrich’s words served as a warning to other GOP contenders. The Washington Post’s Chris Cilizza, in a May 22 post on his Washington Post blog, wrote “For Republicans running for president in 2012, there’s a new political reality: Support Rep. Paul Ryan’s budget plan—or else.”

Gingrich’s rough opening fed into what had already been part of the media narrative about the former Speaker—that he was, at times, unpredictable and undisciplined. On May 17, NBC anchor  Brian Williams pointed out that “just two days ago on Meet the Press with David Gregory [Gingrich said] “the central test he’s going to face in the 2012 campaign will be whether or not he has the discipline and the judgment to be president. Well, in just the last 48 hours, it’s been a rough go, a tough rollout for Mr. Gingrich.”

Obama’s Speech on the Mideast

Last week’s coverage of the Israeli-Palestinian issue was triggered by a May 19 Obama speech from the State Department on the changes rippling through the Arab world. And it was his statement on the 1967 Israeli borders that got everyone’s attention. Obama stated that those were the borders that should be the basis of an Israel-Palestine deal.

Israel’s Prime Minister, Benjamin Netanyahu, who was to visit the United States the following day, immediately made news by protesting, saying such an arrangement would render Israel “indefensible.” The speech was also denounced by several prominent Republicans, including potential presidential candidates Mitt Romney and Jon Huntsman, as well as declared candidate Newt Gingrich. On May 20, Obama and Netanyahu met at the White House in what appeared to be a strained affair.

Obama’s remarks also appeared to anger many commentators on the right. “We have had a major shift in American foreign policy, and it is not a good one,” said Sean Hannity on his May 19 radio broadcast.

Some journalists pointed to the domestic political implications of the speech and the strained meeting of the two leaders. “It is a remarkable public airing of a disagreement among friends; it immediately rippled through our domestic politics as well,” said John King on CNN that Friday.

The breaking news event that generated the most attention last week was the arrest of IMF chief Dominique Strauss-Kahn on May 15. Strauss-Kahn found himself inundated by cameras and microphones as he was shuttled from the airport to the court room, then to the city jail and finally house arrest.

Strauss-Kahn’s arrest, on charges of trying to rape a hotel maid, became a cautionary tale of how the mighty have fallen, as the media chronicled his detainment, denial of bail, imprisonment on Rikers Island, and ultimately his resignation from the IMF toward the end of the week.

As the New York Times put it on May 20, “A week ago, Dominique Strauss-Kahn was a man of international stature and influence. By Friday, he had become something of a pariah, turned away from the Upper East Side luxury building he sought to inhabit and stuck on Rikers Island.”

The media explored other themes as they covered the disgraced French leader, including the impact on French politics, the seedier aspects of the culture at the global development institution, and the future leadership of the IMF. One NPR segment from May 19 summarized the feelings of many in non-Western countries that the task of running the IMF should not necessarily go to a European. “They say the West no longer dominates the global economy the way it once did, and allowing Europe to dominate the Fund no longer reflects reality,” the report stated.

It was enough coverage to surpass that of Barack Obama, himself the focus of 11% of stories in a week that contained a major speech on the Middle East. (That coverage was up from 8% the week before).

Two other newsmakers—Arnold Schwarzenegger and Maria Shriver—drew media attention for the end of their high-profile marriage, which fell apart after the former governor admitted to fathering a child with the couple’s housekeeper about 14 years ago. Schwarzenegger was the No. 3 newsmaker last week, featuring prominently in 5% of stories, and Shriver, a prominent member of the Kennedy clan, was No. 5 (2% of stories).

Finally, at No. 4, was Newt Gingrich, the Republican candidate for president who perhaps did more last week to stall his campaign than to advance it. He was the focus of 4% of stories studied.