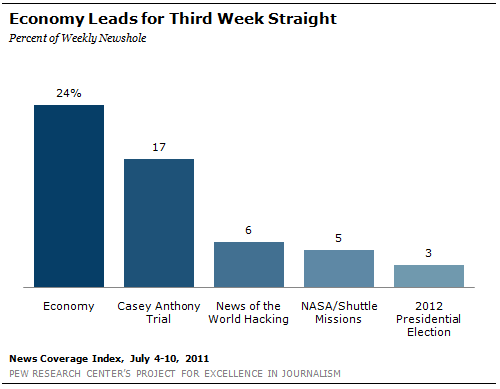 two big international stories that have recently dominated the headlines remained at the top of the U.S. news agenda last week. But there were signs that media attention to both of them was beginning to plateau as the U.S. economy re-emerged as a bigger story.

Unrest in the Middle East, driven by the volatile Libyan civil war, accounted for 38% of the newshole during the week of March 28-April 3, according to the Pew Research Center’s Project for Excellence in Journalism. Even with President Obama delivering a prime-time speech on the subject, coverage was down from the week before (47%), amid signals of a protracted military struggle between the rebels and Muammar Gaddafi.

There was a clearer indication of waning press interest in Japan, where the aftermath of the March 11 earthquake and tsunami, most notably the subsequent nuclear emergency, accounted for 12% of the coverage studied. That compares with 15% the previous week and a whopping 57% the week before that. The diminishing coverage may, in part, be attributed to continuing reports about the damaged  nuclear plant that are dismaying, but perhaps no longer ominous to an audience outside of Japan.

And there were signs last week of a return to earlier news priorities. Media attention to the U.S. economy was the No. 3 story, accounting for 10% of the week’s coverage. That was about double the amount from each of the previous two weeks, and it was driven by good news on jobs and bad news on the housing front.

A story closely related to the economy, the prospect of a federal government shutdown over the continuing budget stalemate, was the No. 4 story, accounting for an additional 5% of the newshole.

Finally, Afghanistan resurfaced on the media’s radar as the No. 5 story of the week, at 3% of the newshole. That marked the first time in 2011 that conflict ranked among the top five stories, and coverage was driven largely by new information about the Kill Team—a U.S. Army unit that engaged in civilian cruelty and killings.

Another 1% of the week’s coverage was devoted to the events triggered when conservative pastor Terry Jones and his Florida church conducted a staged burning of the Koran. That produced protests in Afghanistan that have resulted in at least 10 deaths.

No Quick Exit in Libya

What started two weeks ago as a mission showed signs of turning into morass, and the mainstream media began scaling back its wall-to-wall coverage last week.

The week’s news began with apparent momentum on the rebel side, as anti-Gaddafi forces pushed forward with the aid of NATO air strikes. But with a growing chorus of critics pressing President Obama to clarify the country’s role and endgame in the mission, he delivered a prime-time presidential address on March 28 that triggered a torrent of media analysis.

While supporters and detractors of Obama and his speech crossed strictly partisan lines, on prime-time cable the divisions between red and blue persisted.

MSNBC’s Ed Schultz, however, criticized Republicans for failing to support the president. “A Democrat is the commander-in-chief during a time of war, so Republicans, what they’ve done, is they’ve put down the flags and they’ve gone on the attack,” he said on his March 29 broadcast.

And as the week wore on and Gaddafi’s forces appeared to regain the upper hand, press accounts conveyed a growing sense of concern about the mission.

An ABC News report on March 28 described the unease in Washington about the potential for mission creep: “There is concern on Capitol Hill in both parties about where the president’s actions are going.”

The next day brought bad news, as a PBS’ News Hour reported that, “The rebel drive across northern Libya turned into a panicked pullback…as Muammar Gaddafi’s forces lay down a barrage of heavy weapons fire on the approaches to Sirte, Gaddafi’s hometown.”

An April 1Washington Post story quoted one senior administration official explaining the limited U.S. options in the conflict. “Apart from those who want to go further and impose regime change militarily, there are not a lot of alternatives put forward,” the source said. “It’s a situation that involves bad choices and worse choices.”

The nuclear crisis in Japan continued last week, but media interest continued its downward trajectory.  And it was the No. 4 story on cable news and No. 5 in radio news, the two sectors that include ideological talk shows that tend to be sensitive to the week’s most urgent issues.


The vast majority of the week’s coverage—more than 80%—focused on the continuing radioactive leakage from the crippled Fukushima nuclear plant. And as the week went on, the presence of nuclear contamination in sea water became the latest concern.

The Japanese found themselves having few attractive options in the quest to stabilize the volatile nuclear reactors. NBC News’ Lee Cowan reported on March 29 about this dilemma: “The weary workers struggling to keep Japan’s nuclear disaster from getting any worse are faced with an uncomfortable reality. The cure could be almost as bad as the disease itself.” Cowan went on to explain how water may be the necessary antidote to stabilize the plant, but due to a leak in the infrastructure, the water leaving the plant is radioactive.

Even with the growing radiation concerns, however, the ongoing problems in Japan have seemed to have achieved something of a “new normal” status, as the diminishing coverage would suggest. 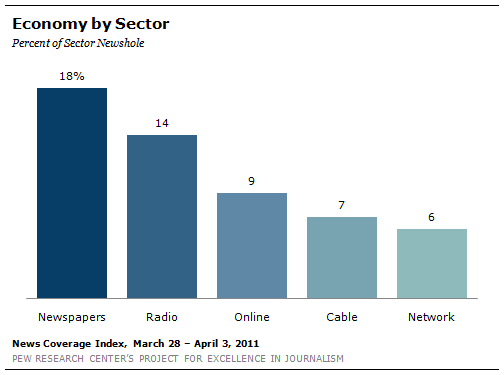 Last week did see a significant jump in coverage of the economy, a boost in part attributable to a combination of sobering housing data and better jobs news.

In newspapers (18% of the front-page coverage) news about the economy accounted for more of the newshole than any other story. The New York Times on March 30 reported on the troubled housing market, which not even an Obama Administration foreclosure aid package could rescue. “The effort has failed to stanch a wave of foreclosures and a decline in home prices, which have fallen for six consecutive months and are now just barely above their recession low,” the story reported.

On the other side of the ledger, an April 1 Wall Street Journal story  noted that new labor statistics “offered the latest signs of an improving economy” as the unemployment rate dropped to 8.8% in March—the lowest level since March 2009.

A related subject, the fear of a government shutdown—which could happen as early as April 8 due to the unresolved federal budget talks—was the No. 4 story, at 5% of the newshole.

And finally, at No. 5, was the other U.S. war, Afghanistan. The news that drove last week’s coverage was grim. A Rolling Stone magazine article introduced American audiences to the “Kill Team,” an Army platoon known for staging killings of unarmed civilians and taking photographs of their victims. The week also saw more U.S. combat deaths, totaling six.

Driven by his televised defense of American intervention in the Libyan conflict, President Barack Obama was the most prominent newsmaker last week. (To be a lead newsmaker, someone must be featured in at least 50% of a story.) He was the focus of 10% of all the week’s stories, nearly double the number from the previous week.

The last time any newsmaker achieved that level of attention was the week of February 21-27, when Muammar Gaddafi was the lead newsmaker in 11% of stories. Last week, the embattled Libyan president remained a key focus of the press, appearing prominently in 2% of stories—the sixth straight week he has been the No. 1 or No. 2 newsmaker.

Gaddafi shared the spotlight with two other prominent Middle Eastern figures. One of these was Moussa Koussa (2%), the Libyan foreign minister, who defected from the Gaddafi government and flew to Britain.  The other was Syrian President Bashar al-Assad (1%), himself the target of continuing protests.

The fifth-leading newsmaker, also at 1%, was Secretary of State Hillary Clinton, a key player in formulating U.S. policy in Libya.