Shortly after 12:46 am EST on March 11, when a massive 8.9 magnitude earthquake hit off the coast of northeast Japan, Twitter began to reverberate with posts about the catastrophe.

"wow, that was a crazy earthquake… ran out of the building. 7.9 at epicenter," posted tech blogger Chris Latko from the scene.

For the one day, Friday, March 11, fully 66% of the news links on Twitter were about the Japanese earthquake and tsunami, according to the New Media Index from the Pew Research Center’s Project for Excellence in Journalism. For the entire week, March 7-11, 20% of the news links were on that subject, making it the No. 1 story.

The response to the earthquake illustrated the different ways in which Twitter functions as a social media tool. Initially, the site served as a way to get breaking information from a variety of official and unofficial sources, including some eyewitness accounts. It also acted as an electronic bulletin board, passing on tips about everything from the location of bathrooms to ways of tracking loved ones.

And once the scope of the catastrophe became apparent, Twitter became a place to raise funds for the recovery effort and for users to express their thoughts and condolences for the victims. 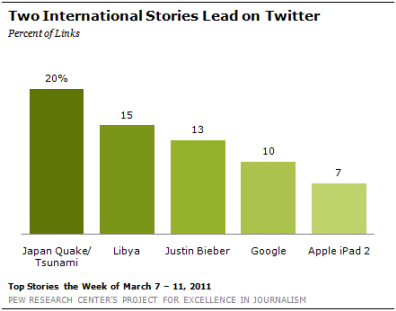 Since PEJ began its New Media Index in January 2009, there have been several occasions in which Twitter has become a go-to site during times of disaster and other major world events. In January 2010, Twitter was central to the fundraising effort following the earthquake that rocked Haiti, and was an important communication tool during the Iranian protests in June 2009.

The No. 2 story on Twitter (at 15%) last week was another international crisis, the civil war in Libya, with a particular focus on the danger to foreign journalists covering the fighting. Most of the links were to articles about a BBC Arabic news team that was detained and beaten by Muammar Gaddafi’s security forces. (Libya was also the fourth-largest subject on blogs last week.) This marks the third consecutive week that the situation in Libya has been a top-five story on Twitter.

A report in the British newspaper, The Sun, that pop star Justin Bieber rode through an airport terminal in Birmingham on a skateboard was third with 13%.

Business stories about Google were fourth, at 10%, including a Mashable report that the company would be expanding the staff of its popular video site, YouTube, by 30% in 2011, adding roughly 200 new positions. And a preview of Apple’s new iPad 2, which went on sale March 11, was fifth at 7%.

The mainstream media has yet to evince much interest in the slow-starting 2012 presidential race. But 10 months before the Iowa caucuses, the top story on blogs, with 37% of the links, was that looming campaign.

Most of the attention was on the potential crop of Republican candidates. Many bloggers linked to a Washington Post column in which George Will criticized statements made by some of the potential candidates such as Mike Huckabee and Newt Gingrich. Others highlighted a BBC story discussing whether former Alaska Governor Sarah Palin was capable of winning the presidency. For the most part, bloggers agreed with Will that there was no clear frontrunner for the nomination, and there seemed to be little enthusiasm for the crop of potential candidates as a whole. 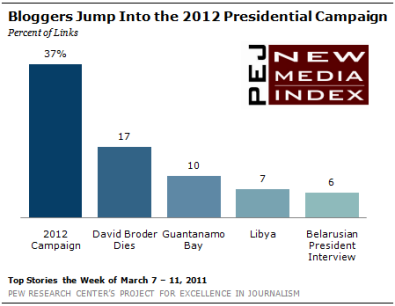 The No. 2 story on blogs, at 17%, was the passing of Pulitzer Prize-winning Washington Post columnist David Broder at the age of 81. Some bloggers marked his death by recounting their favorite Broder columns, while a few took the opportunity to criticize Broder’s work as too centered on the Washington establishment.

Another Washington Post column by George Will, raising doubts about the wisdom of U.S. intervention in Libya, was fourth at 7%.

And a Washington Post interview with Belarusian President Alexander Lukashenko regarding allegations that the recent presidential election there was fraudulent finished fifth, at 6%.

Even while the details of the disaster were still unclear and before many mainstream news outlets reported specifics, a number of people in Japan who had web access began producing first-hand accounts.

Within an hour of the quake, at least 1,200 tweets per minute were coming from Tokyo, according to Tweet-o-Meter, a site that measures Twitter traffic.

"Wow, that was the biggest earthquake I’ve felt in my nine years in Japan. Very scary," tweeted Tomoko A. Hosaka, a journalist for The Associated Press in Japan.

"Anyone hurt in that one?" asked Matt Alt, an American writer and translator living in Japan, following an aftershock.

"Running cars on road in path of flood. This is beyond words," tweeted TokyoReporter, an unnamed journalist and photographer living in Tokyo. Within an hour, TokyoReporter posted several more tweets such as "And we are shaking again in Tokyo, not too bad tho. Real worries w/ Tsunami."

Within hours, a number of official and independent sources used Twitter to relay important information. The U.S. State Department, for example, used the site to publish emergency numbers and tell Japanese residents in America how to contact families in the region. In Japan itself, where an estimated 10 million people are active users of Twitter, people used the site to exchange information about family and friends, discuss rolling power failures, and share other tips.

"Just fyi for anyone who needs, there are public emergency toilets in Shiba Park," wrote AP reporter Hosaka three hours after the initial quake hit.

By 9:00 am ET, one of the most popular links tweeted around the world was Google Person Finder, a place where people around the world could post or find information about the whereabouts of individuals.

Users could convey any information they had, such as this note written by Andrew Meyerhoff three days after the quake: "[Dr.] Judith [Ann Johnson] contacted me last night. She is very genki, alive and well, and safe in Iizuka. No worries, Steve!"

As the details of the disaster became clearer and official news sources were able to provide detailed reporting, Twitter offered users opportunities to get breaking information from a variety of sources in real-time.

A number of observers outside of Japan tried to make sense of breaking information they gleaned from other sources. Julian Dierkes, a sociologist living in Canada, followed a number of news outlets including NHK.

"Can’t tell whether nuclear power plant shutdowns are routine safety precaution or sign of trouble, no specifics on this in news," Dierkes wrote in the hours following the quake.

For those on the west coast of the U.S., Twitter was a way to track the approaching tsunami created by the quake. Many twitterers linked to a bulletin by the National Weather Service Forecast Office warning about the potential impact.

News outlets, such as a local NBC affiliate in Seattle called King 5 News, also posted a number of updates.

"NWS tsunami watch issued for the S. Washington and N. and Central Oregon coasts," the station posted about an hour after the quake hit.

And is often the case with Twitter, informal patterns quickly turned into formal designations, especially in regard to hashtags, symbols used to mark keywords or topics. Within hours, thousands of users were including tags such as #earthquake, #JPQuake and #savejapan in their messages.

For those who were not directly impacted by the catastrophe, Twitter became a way to share methods for donating money to help the recovery-a process reminiscent of the effort during the 2010 Haiti quake. According to the New York Times, the American Red Cross raised $34 million in the five days after the incident, in part because of the Twitter messages.

Many people tweeted the message, "Text REDCROSS to 90999 to donate $10 to Japan’s emergency relief."

Finally, Twitter served as a platform for people to share their condolences and prayers for those affected-many of whom used the hashtag #prayforjapan.

"As I lay my head down to sleep tonight, I will say a prayer for the victims of the Japan disaster," shared Natisha Patel.

Demonstrating the international influence on YouTube and social media in general, the most viewed news video last week was a news story in Spanish that received almost no attention in the U.S. press.

During a March 1 soccer match in Colombia, a defender named Luis Moreno kicked an owl (the mascot of the opposing team) that had landed on the playing field. The bird went into shock and died several hours later.

Moreno, who is from Panama, was fined and suspended for 2 games because of the incident, and was reviled throughout much of Colombia.

The television story about the event was viewed more than 1.5 million times.