A Furious Week Ends in Disaster

It was a dramatic week. Forces loyal to Muammar Gaddafi won key victories in the Libyan civil war. After weeks of protests, Wisconsin Republicans found a way to suddenly pass a measure curtailing collective bargaining rights. And passions were stirred by a U.S. House hearing on radical Islam.

But on Friday March 11,  the devastating 8.9 magnitude earthquake and tsunami that struck Japan commanded virtually wall-to-wall coverage, accounting for more than half (52%) of the overall newshole studied by the Pew Research Center’s Project for Excellence in Journalism. And as is often the case with dramatic breaking news, the disaster was first and foremost, a television story—accounting for more than three-quarters of the airtime examined on both broadcast and cable news on March 11.

Even though it happened on a Friday, the events in Japan registered as the No. 3 story for the week of March 7-13, accounting for 12% of the overall newshole in the News Coverage Index. Given the many dimensions to the story—including growing concern over radiation from damaged nuclear plants—there is a strong likelihood it will continue to dominate the news for the foreseeable future.

The week’s No. 1 story, for the sixth time in seven weeks, was the violence in the Middle East, driven by the fighting in Libya and more calls for the West to impose a no-fly zone. But at 21% of the newshole, that represents the lowest level of Mideast coverage in seven weeks. A week earlier it was 32%. A related story, the rise in U.S. oil and gas prices, was the week’s fifth-biggest, at 3%.

The No. 2 story, as it has been for the past three weeks, was the economy, at 19% of the newshole. And once again, coverage was driven by the confrontation between the unions and the governor in Wisconsin over collective bargaining rights—a battle won, at least temporarily, by the governor last week. Coverage was down only slightly from the previous week, when it was 20%.

In another week, the fourth-biggest story—the March 10 Islamic terrorism hearings chaired by Republican Congressman Peter King that produced a sharp partisan divide—might have generated more media attention. But at only 5% of the newshole, they turned out to be more of an afterthought than main event.

News of the earthquake that struck Japan on March 11 at 2:46 p.m. local time greeted Americans as they awoke that Friday. By day’s end, concerns about Japan’s nuclear infrastructure were already seeping into storylines.

On the CBS Early Show, viewers saw scenes of homes and boats being tossed atop rampaging waters, buildings rattling and fires raging.  Interviewed via Skype, Tokyo resident Matt Alt described his experience as “a terrifying sensation…like a sustained case of vertigo. The entire floor was shaking, almost like a carnival ride”—even though Tokyo suffered far less damage than Japan’s northeast coast.

The media Friday quickly picked up on the possibility of disaster on U.S. shores. CBS morning anchor Erica Hill relayed a warning to American citizens that the deadly tsunami was “now rolling toward Hawaii and the west coast of the United States.” The waves damaged the harbor in Crescent City California and killed one person, but concerns about any major damage to the U.S. soon disappeared from the media narrative.

Throughout the day, grim images of the destruction in Japan filled the television screens and by evening, when it was time to take a deeper assessment of the situation, the nuclear threat began looming.

That night on MSNBC, Rachel Maddow interviewed Edwin Lyman of the Union of Concerned Scientists, who expressed support for a plan to implement controlled venting of radioactive steam at the damaged nuclear facilities in Fukushima in the hope it would prevent a larger problem.

In the event of a “catastrophic rupture of the containment [or] a large-scale core melt…we could be facing something like Chernobyl as opposed to something like Three Mile Island,” Lyman added.

By Sunday, the prospect of a major nuclear accident had become a bigger part of the narrative.

“Japanese officials struggled on Sunday to contain a widening nuclear crisis in the aftermath of a devastating earthquake and tsunami, saying they presumed that partial meltdowns had occurred at two crippled reactors and that they were facing serious cooling problems at three more,” reported the New York Times. “The emergency appeared to be the worst involving a nuclear plant since the Chernobyl disaster 25 years ago.”

As the week ended, the news from Japan seemed divided among three major storylines—the rescue and recovery mission, assessing the damage and impact and the still unfolding story at the nuclear power plants.

Coverage of the situation in the Middle East, most notably Libya, topped the news agenda last week. But perhaps due in part to the earthquake, coverage (21%) was down by more than a third from the week before. In the last seven weeks, Mideast unrest has filled 32% of the newshole.

Last week, events in the region generated the most coverage (26%) in the online sector.

The media narrative last week focused on fighting that seemed to be turning toward Gaddafi’s forces. That theme was bolstered by the March 10 testimony of U.S. Director of National Intelligence James Clapper. “Under current conditions, Libyan leader Moammar Gadhafi appears likely to survive the revolt against him because of superior equipment, the head of the U.S. intelligence community told Congress in a blunt assessment,” stated a CNN.com story. 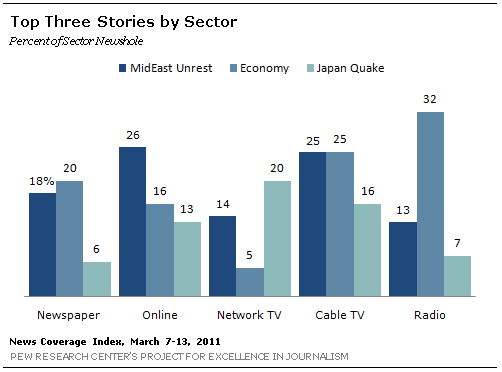 That was strong stuff, given that President Obama, Clapper’s boss, has insisted that Gaddafi should leave. Indeed, part of the media narrative was that the politics of this for the United States had gotten more daunting. “Nearly three weeks after Libya erupted in what may now turn into a protracted civil war, the politics of military intervention to speed the ouster of Col. Muammar el-Qaddafi grow more complicated by the day—for both the White House and Republicans,” a New York Times story concluded.

But over the weekend, more pressure for military intervention was brought to bear on the western powers from the region itself.

“The Arab League, in an emergency meeting in Cairo, has voted to ask the UN to impose a no-fly zone over Libya,” said a story posted on Yahoo! News. “While the U.N., NATO, and the European Union have so far resisted efforts to intervene in the Libyan civil war, one of the excuses the Obama administration has been making for not intervening is that it might anger Arab countries. But now it seems the Obama administration is risking angering Arab countries by not intervening.”

The standoff between labor unions and Wisconsin Governor Scott Walker drove coverage of the U.S. economy for the fourth consecutive week. The subject generated the most attention (32%) in the radio sector.

The big news was that Republicans in the state found a way to pass the measure constraining union bargaining rights.

The AP reported on March 10 that Wisconsin lawmakers used a legislative loophole that “strip[ped] nearly all collective bargaining rights from public workers” despite the fact that 14 Democratic senators who fled the state had been able to prevent a vote on the governor’s “budget repair bill.”

“Republicans…took all the spending measures out of Walker’s proposal and a special committee of lawmakers from both the Senate and Assembly approved the revised bill a short time later,” the story explained.

In a week with fewer dramatic events, contentious Congressional hearings on Islamic terrorism— that supporters defend as vital to national security and detractors decry as a form of McCarthyism—might be a natural newsmaker.

But last week, those hearings accounted for only 5% of the overall newshole, attracting the most coverage (8%) in the cable news sector.

The coverage seemed to suggest two parts of the country talking past each other. “Framed by photos of the burning World Trade Center and Pentagon, the families of two young men blamed the Islamic community for inspiring young men to commit terrorism. On the other side, one of the two Muslims in Congress wept while discussing a Muslim firefighter who died in the attacks.”

The tenor of the hearings led the Washington Post to run a post-mortem story headlined: “Plenty of drama, less substance.”

No one really dominated coverage from March 7-13. President Barack Obama was the No. 1 newsmaker, registering as a prominent figure in 5% of the week’s stories.  (To be a prominent newsmaker, someone must be featured in at least 50% of a story.)

Muammar Gaddafi, who had supplanted the president as the top newsmaker for the previous two weeks, was No. 2 last week, at 3%. But that was down from 6% the week before and 11% the week prior to that.

For the third week in a row the No. 3 newsmaker (also at 3%) was Wisconsin governor Scott Walker. He was followed by Rep. Peter King (2%), who chaired and convened the terrorism hearings last week.

For the second straight week, troubled actor Charlie Sheen made the roster of top newsmakers, registering in 2% of last week stories as he filed a $100 million lawsuit against Warner Brothers and the executive producer of Two and a Half Men, the CBS sitcom he was recently fired from.