First a Speech, then an Uprising, Dominate the News 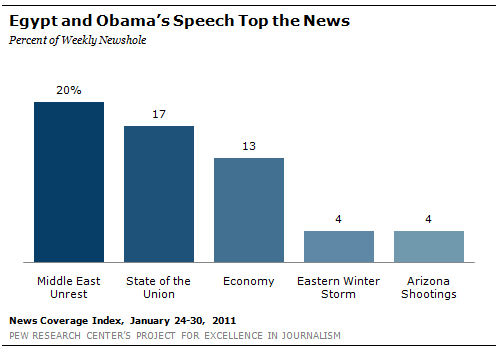 Last week’s news landscape was a tale of two stories—one much-anticipated event in Washington and an unexpected drama unfolding about 6,000 miles away. In the first part of last week, the media focused on President Obama’s January 25 State of the Union speech. In the latter half, Egyptian protests that began to look like a revolution dominated coverage, virtually drowning out the president’s emphasis on re-tooling the U.S. economy.

By the time it was over, events in the Middle East—most notably the Egyptian uprising against President Hosni Mubarak—was the No. 1 story from January 24-30. They accounted for 20% of the week’s coverage according to the Pew Research Center’s Project for Excellence in Journalism. Coverage of the State of the Union speech, and the reaction to it, trailed closely behind, filling 17% of the coverage studied by PEJ’s weekly News Coverage Index.

That was not what President Obama had planned. In the first three days of the week, his address accounted for much more of the media narrative (28%) than it would by week’s end.

Much of the coverage of the speech featured post-mortems and an emerging consensus that it was centrist, careful and politically sound. (One poll, from CNN/Opinion Research, had 84% of the public offering either a very or somewhat a positive response.)

Coverage of the rapidly spiraling events in the Mideast began slowly, but picked up momentum as crowds of Egyptian protestors swelled in defiance of the government. As the week went on, coverage turned more U.S.-centric, as pundits and analysts debated the potential impact the instability in Egypt would have here as well as the wise course of action for the Obama Administration.

While attention to the Mideast upheaval in Tunisia, Lebanon, Yemen and Egypt accounted for only 8% of the overall coverage early in the week, from January 27 through January 30 it skyrocketed to 36%.

A third story generated significant attention last week as well—the U.S. economy, at 13% of the newshole. That narrative was fueled by a disquieting estimate from the Congressional Budget Office that the budget deficit in 2011 would reach $1.5 trillion.

The week’s No. 4 story (at 4%) was a major midweek winter storm that roared along the East Coast, stranding rush-hour commuters in Washington and dumping another accumulation on already shell-shocked Boston.

The fifth-biggest story is one rapidly moving off the media radar screen. The aftermath of the January 8 Tucson shootings that killed six and seriously wounded Congresswoman Gabrielle Giffords accounted for just 4% of the coverage last week. That is down dramatically from 17% the previous week and from a stratospheric 57% the week prior to that.

The Week Part I—State of the Union

The run-up to Obama’s January 25 speech—delivered in a political landscape dramatically altered by the mid-term elections—included previews of both the president’s remarks and the reaction of his political foes.

On the January 25 Early Show, for example, CBS correspondent Chip Reid reported that the president will “call for new spending on education, roads, bridges, and the environment. The president will call them investments, but Republicans will say it is exactly the kind of government spending they were elected to cut.”

After the hour-long speech—in which Obama hammered away at the U.S. “winning the future” with a forward-looking economy centered on technology, research and education—many of the media reviews were respectful while suggesting the speech itself was more strategic than artful.

A January 26 story on the AOL News site declared that the State of the Union “neither soared nor stumbled…But it did succeed in presenting the president as the centrist he is, picking up on some Republican ideas while giving what in long stretches sounded like a U.S. Chamber of Commerce speech encouraging major investment in clean technology.”

The speech left columnists on the New York Times Op Ed Pages debating how centrist the President really was. Conservative columnist David Brooks characterized the address as “modest more than moderate. The three things the president emphasized were all worthy, important policies that have significant bipartisan support: spending for basic research, education reform and infrastructure spending.” His liberal colleague Gail Collins, somewhat grudgingly asserted, “Never have I beheld so much reasonable moderation.”

A day later, however, coverage of the speech had plummeted. On Thursday January 27, it accounted for less than 5% of the day’s coverage. And some of that focused on Sarah Palin’s critique of the address and in particular, Obama’s invoking of the phrase “Sputnik moment” to describe the country’s current challenges. (The Soviets’ 1957 launch of the Sputnik satellite at the height of the Cold War triggered a space race and a major technological push by the U.S.)

Palin took issue with the use of Sputnik asserting that USSR “also incurred so much debt at the time that it resulted in the inevitable collapse of the Soviet Union.” Some commentators, noting that the collapse did not occur until 34 years later, questioned Palin’s reading of history. That included CNN anchor Soledad O’Brien, who said, “If she literally means that Sputnik bankrupted the Soviet Union and led to the collapse, then, well, that makes no sense at all, because Sputnik went up, if you will remember, October 4, 1957. The Soviet Union dissolved in December 1991.” 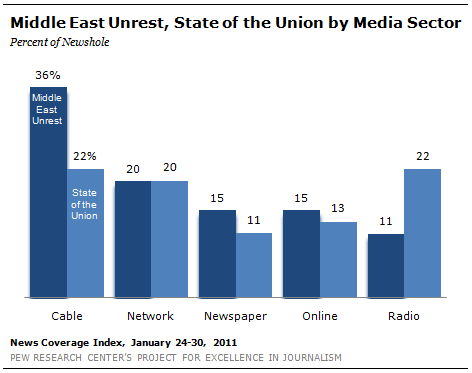 From the entire week of January 24-30, the unrest was the No. 1 story in three out of the five media sectors that PEJ studies. It generated the most coverage on cable news (36% of airtime studied for the week overall), with the screen often filled with scenes of street protests and scattered violence in Egypt. It was a moment reminiscent of an earlier era of cable news, where breaking events from distant lands were the news.

Last week’s Mideast narrative began, as it turns out, with stories about other hotspots in the volatile region. On January 24, some coverage focused on unrest in Tunisia, where an uprising had forced the ouster of President Zine el Abidine ben Ali on January 14.  Indeed, events in Tunisia were seen as the kindling that helped spark the populist fire in Egypt.

Another story that day was Al Jazeera’s unearthing of documents indicating that the Palestinians were prepared to make major concessions to the Israelis during unsuccessful 2008 peace talks.

On January 25, as Egyptian protests percolated, a good deal of media attention was focused on turmoil in yet another country, Lebanon, where the Iranian-allied group Hezbollah had played a major role in selecting a new government expected to be less friendly to the west.

But by mid-week, the narrative shifted definitively to Egypt—a strategically crucial country whose unpopular President, Hosni Mubarak, has presided over a tepid peace with Israel and functioned as a significant regional ally of the U.S.

On January 26, the New York Times reported on a government crackdown on the growing protests with the announcement of “a new ban on public gatherings [while] sending police equipped with clubs, tear gas and armored carriers against small groups that defiantly gathered in Cairo to oppose the 30-year rule of President Hosni Mubarak. The Associated Press, citing unnamed Egyptian security officials, reported that 860 protesters had been arrested since major protests began Tuesday morning.”

While events on the streets of Egypt were still unfolding and volatile, the narrative in the American news media was already turning inward. By Thursday, the conversation began to gravitate to the implications of the situation for the U.S. as the administration struggled to find a balance between support for pro-democracy protestors and it strategic relationship with the Mubarak government.

Mideast analyst Graeme Bannerman, tried to summarize the conundrum facing the United States during the January 27 PBS NewsHour when he stated, “if you have truly popular governments in [that region], you’re likely to elect people who are much less sympathetic to the United States, which creates a whole series of political problems for us…Now, do we want reform in Egypt? Absolutely. That’s in our interest…But how you get there is very difficult.”

The next night on MSNBC’s Hardball, political commentator Howard Fineman put it in more political terms in the wake of a White House warning to Egypt about using force against peaceful protestors. That message might have reflected the President’s values, Fineman speculated. “Now, the question is going to be, if we end up with the [Islamist] Muslim Brotherhood in charge of Egypt, then the president is going to be called to account for the commitment he made.”

By the weekend, the U.S. media were conveying a stronger sense that the protests might ultimately doom the current government.

“Mubarak’s Grip Tested,” blared the page 1 headline in the January 30 Washington Post, which reported that Egyptian soldiers sent to the streets had actually “flashed peace signs and smiled approvingly as demonstrators chanted ‘Down with Mubarak!’”

Coverage of the state of the U.S. economy surged, jumping to 13% from 8% the previous week. The leading storyline, accounting for about one-third of the economic coverage, involved the national debt and budget deficit. And the big newsmaker there was the CBO estimate of the $1.5 trillion deficit in 2011.

The fourth-biggest story (at 4%) was the winter storm that hit the East Coast last week—an event that generated the most coverage (7%) in online news. That was followed, also at 4%, by the aftermath of the Tucson shootings. What coverage there was last week focused largely on alleged shooter Jared Loughner’s not guilty plea in federal court and Gabrielle Giffords’ transfer to a rehabilitation center, another sign of her improving condition.

But after the shooting saga overwhelmingly dominated the news from January 10-16 and still registered as the top story from January 17-23, last week’s lack of coverage suggests the story has now moved to the media back burner.

But even as the media lost interest in the Arizona story, the public remained very engaged. According to a survey by the Pew Research Center for the People & the Press, significantly more respondents said they were following the shooting saga “very closely” than were devoting that level of attention to events in Egypt. 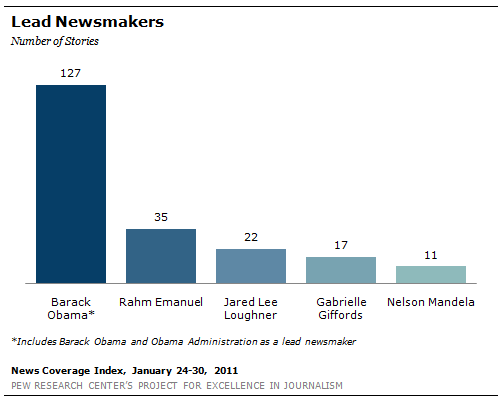 As is typically the case, President Obama topped the headlines from January 24-30, appearing as a dominant newsmaker in 14% of the week’s stories. That represents the most coverage of the president so far in 2011 and a substantial jump from 8% the previous week. (To be a dominant newsmaker, someone must be featured in at least 50% of a story.

Obama’s former chief of staff, Rahm Emanuel, was the No. 2 newsmaker, registering in 4% of the stories. Emanuel’s bid to become Chicago’s next mayor was kept alive last week by an Illinois Supreme Court ruling that he qualified as a legal resident of that city. Tucson shooting Jared Loughner, with his not guilty plea, emerged as the No. 3 newsmaker (2%) while his victim, Congresswoman Giffords, was next, also at 2%.

Former South African President Nelson Mandela, 92, who was hospitalized and released later in the week following a respiratory infection, was the fifth-biggest newsmaker, at 1%.

*Due to a snowstorm that disrupted PEJ’s satellite reception, some television programs from the evening of Wednesday, January 26, were not included in this week’s sample.