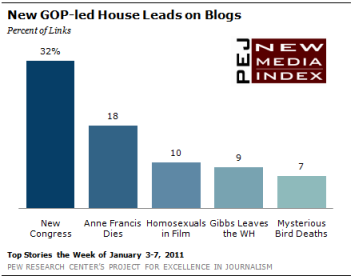 Echoing the mainstream press, the blogosphere last week focused its attention on the new Congress sworn in on January 5. And perhaps not surprisingly, liberal and conservative bloggers had strongly divergent views about a House of Representatives under Republican control.

For the week of January 3-7, fully 32% of the news links on blogs were about the 112th Congress, making it the No. 1 subject, according to the New Media Index from the Pew Research Center’s Project for Excellence in Journalism. The same subject was also the leading topic in the traditional press last week.

The time period covered by this NMI report ended on January 7, a day before the shootings in Arizona that killed six people and left Democratic Congresswoman Gabrielle Giffords in critical condition. That event, as it did in the mainstream press, consumed the online community almost immediately after it happened. For a chronology of the media’s initial reporting on that event, click here.

For the week ending January 7, an eclectic mix of stories generated attention in the blogosphere, including two Beltway political stories, two involving the entertainment industry and another that some people were calling, half-jokingly, a possible sign of the apocalypse.

The discussion about the new Congress largely followed party lines. Conservatives cheered the decision by Republicans to read the Constitution on the House floor and were hopeful about the party’s plan to undo some of Obama’s agenda.

Liberals focused on plans by Rep. Darrell Issa (R-CA) to spend much of the next two years investigating the Obama White House-an administration he called one of the most corrupt.  They saw that claim as absurd and argued that the plan to spend so much time investigating the White House showed that Republicans were not much interested in governing.

The No. 2 subject in blogs last week was the death of actress Anne Francis, who starred in movies and on television in the 1950’s and 60’s. Bloggers largely remembered her as the sultry TV detective Honey West while sharing videos and pictures of her in that role. This continues a trend on blogs when the passing of Hollywood icons, such as Leslie Nielsen a month ago, often generates substantial attention and nostalgia.

An audio interview on the BBC with openly gay actor Rupert Everett about the problems that homosexuals face in the film industry was third at 10%.

Fourth (at 9%) was the news that White House Press Secretary Robert Gibbs was leaving his job as spokesman to help direct Obama’s re-election campaign. This subject also generated attention in the mainstream media last week as part of a series of changes in White House staffing.

And a CNN report about a mysterious event on New Year’s Eve when thousands of red-winged blackbirds fell dead in an Arkansas town was fourth at 7%. The precise cause of the mass kill is unknown, although experts suggest that fireworks or weather caused large-scale trauma which led to the deaths. A number of bloggers contemplated the possible causes while others implied, often sarcastically, that this was a sign of the apocalypse.

On Twitter, the pattern of technology stories, and most notably a fascination with Apple, dominated the news agenda last week. 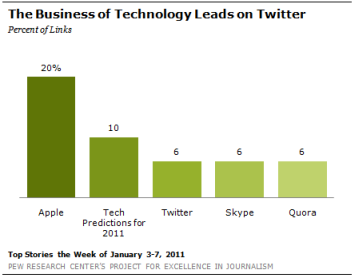 For the second week in a row, stories about Apple led on the popular social networking service (with 20% of the links). The majority of the attention was focused on reports that the company had surpassed $300 billion in value, making it the second-largest company in the world behind only Exxon.

A column on TechCrunch predicting seven new technologies that will "rock" in 2011 was second, at 10%. Included in the predictions are the growth of web videos on television and the expanded use of mobile wallets.

Twitter was the third largest subject (at 6%). The attention was split between two stories. One was the unveiling of a complicated equation that would rank accounts by the number of followers. The other was a story about the rapid growth of an unusual hashtag, #LessAmbitiousMovies, a meme that encourages tweeters to tweak the titles of popular films to make them seem less ambitious in scope. Examples included "Prancing with Wolves," and "The Goddaughter."

The announcement that Skype has acquired the video streaming service Qik for approximately $100 million was No. 4, at 6%.

And stories about the rapid growth of the web site Quora, a social networking site that describes itself as "A continually improving collection of questions and answers created, edited, and organized by everyone who uses it," were fifth, also at 6%.

One of the first acts of the new GOP-led House was a recitation of the Constitution that lasted about two hours.

"The US Constitution has stood the test of time and has held firm as the supreme law of the United States for over 223 years!" wrote Chris at The "Right" Solutions. "This will be a good civics lesson for all members of Congress!"

Most conservatives, however, focused on criticism of the reading from Democratic lawmakers that appeared in a Washington Post article. Rep. Jerrold Nadler (D-NY), for example, called the act "ritualistic" and "total nonsense" intended to claim the document for Republicans.

"Let’s see now…Nadler doesn’t believe the Constitution is important, yet he takes an oath to defend it," blogged Pragmatic American. "Perhaps, Mister Nadler, if you can’t uphold your own oath, you should find another career?"

"Reactions like this [by Nadler] are exactly why Republicans are now the majority party in the House. Democrats neither believe in the principles of the Constitution, nor its authority to govern the activities of the Congress, nor the LIMITATIONS that it imposes on selfish politicians like Jerrold Nadler," condemned Speaker’s Journal.

Conversely, liberal bloggers focused on Republican plans to launch six major investigations of the White House in their first three months in office and Rep. Issa’s claim that Obama’s administration is one of the most corrupt.

"This man [Issa] is a two faced idiot," declared Dajo at Why Not Progressive? "His own party is responsible for the enormous issues we are facing but he’s blaming the Obama administration."

Some conservatives thought the investigations were appropriate.

"What, an administration based on Chicago-style politics corrupt, well if the shoe fits," expressed Scared Monkeys. "The reason for the investigations is oversight, don’t we really need accounts to see where the tax payer dollars have gone, not attorneys who will simply obstruct what happened?"

Much of the online conversation was about the GOP’s agenda as a whole and whether Republicans had been given a mandate by voters in the last election. Many bloggers gave their opinions while citing a Washington Post profile of new House Speaker John Boehner (R-OH) or news that Republicans had a 20-day plan to undo much of Obama’s agenda.

"In November’s mid-term elections, Democrats were rejected and rejected big time.  Republicans come to town with clear mandates to repeal Obamacare, and repair the damage to our health care system it has inflicted, or threatened to inflict," explained Buddy at Political Truth and Fact. "Democrats are desperate to ignore the expressed will of the American people, and are girding themselves for a major fight."

But more than a few voices expressed concern that the change in power would have no impact at all.

"Blah, blah, blah…from both sides!..They all read right out of the same play-book…and it always has the same ending!" complained Rikk Keith. "The only thing that becomes important to them, is the game of politics. It’s apparent because very little get’s done in Washington. And now, with the party of ‘NO’ in control of the house, I see more of NOthing getting done."

A distinctly non-political subject was the most popular news-related video on YouTube last week-an excerpt from a BBC documentary about polar bears.

Filmmakers built so-called spy cameras into objects that were supposed to resemble blocks of ice, but the polar bears began playing with the objects once they noticed them moving. The playful interaction between the bears and the cameras, which ultimately led to the breaking of the equipment, was viewed more than 1.1 million times.

The video also demonstrates a common dilemma with online videos relating to copyright issues. Despite being such a popular video, it was removed from YouTube due to a request from BBC Worldwide because it was copyrighted material. The video continues to exist, however, on the BBC’s own site.