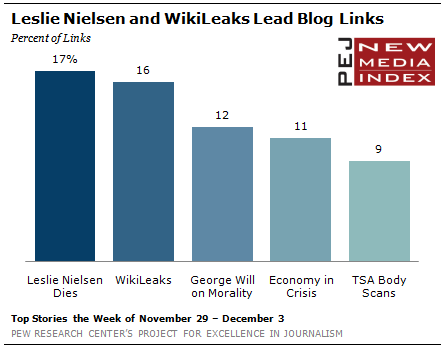 The raging controversy over the leak of classified State Department cables generated major attention in both the blogosphere and Twitter last week. The responses highlight the differing emphases of bloggers and Twitter users.

For the week of November 29-December 3, fully 16% of the news links on blogs and 24% on Twitter were about WikiLeaks, according to the New Media Index from the Pew Research Center’s Project for Excellence in Journalism. That made it the No. 2 topic on both blogs and Twitter.

Attention among social media users even tracked closely with that of the mainstream press, where the topic also ranked No. 2 last week, according to PEJ’s News Coverage Index, at 16% of the newshole.

Bloggers responded to a number of stories about WikiLeaks last week. But the one linked-to most often was a November 29 Washington Post column by Marc Thiessen. In the column, Thiessen accused the Obama administration of failing to stop the release of the documents and offering a weak response once they went public.

The bloggers that responded largely agreed with Thiessen, voicing criticism of Obama and of government overall.

“We trust our Government to protect us,” griped Mad Mike, “Looks like they can not protect themselves. They are too busy running every detail of your life. It is really simple.”*

“Inaction is tacit acceptance of the destructive and criminal activities of WikiLeaks,” grumbled the Quipster, “A lack of leadership is cleary on display from the White House.”

Some bloggers chose to blame the media. “It is craven malfeasance that nobody in the Fourth Estate has issued a mea culpa for their failure of duty in service to this republic,” wrote Pascal Fervor.

On Twitter, although the subject was the same, the focus was markedly different. The stories linked-to here were not politically focused. Instead, most related to either technological or international aspects of the leak.

The greatest number of links was to a November 28 BBC article about computer hackers attacking the WikiLeaks site shortly before the release of documents. Other technology-related stories shared on Twitter included a December 1 Associated Press article about how Amazon forced WikiLeaks to stop using its computers to distribute documents and a December 2 Wired piece about the introduction of anti-WikiLeaks legislation that would make it a federal crime for anyone to publish the name of a U.S. intelligence source.

The international angles highlighted here included an article about leaked information regarding China’s frustration with military actions of North Korea and its readiness to accept Korean reunification and a story on Interpol’s ‘red notice’ for the arrest of WikiLeaks founder Julian Assange.

The No. 1 story on Twitter last week was about a dramatic scientific discovery—a story that made waves on Twitter, but was barely covered in the mainstream media. 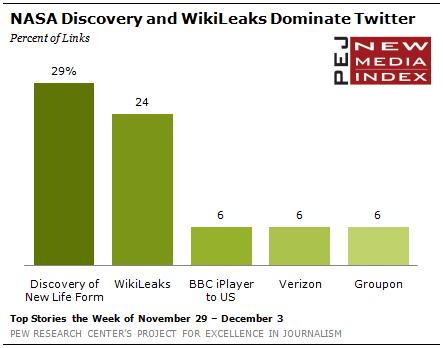 Indeed 29% of Twitter links were to stories (including this Wired article) reporting that NASA had discovered a completely new life form.  The new bacterium contains a different DNA than that of any life form yet discovered on Earth. Instead of phosphorus as one its building blocks (which all of Earth’s life forms use), it uses arsenic.

According to the Wired article this discovery, “changes everything.”

The response on Twitter was generally one of excitement:

A few Twitterers were not as enthused.  “They call it profound but surely it’s just evolution. Same as it would be on any planet,” wrote Steve Campbell.

Rounding out the top five stories on Twitter were three different Mashable articles, each at 6% of the links: A December 2 article about a BBC subscription-based iPad app for U.S. consumers; a November 30 article discussing an upcoming Verizon press conference on 4G service; and a December 1 story on the expansion plans for Groupon, a company that provides daily discounts in cities across the U.S.

The Other Top Blog Stories

The No. 1 story on blogs last week, at 17%, was the death of popular actor Leslie Nielsen, who passed away on November 28 at age 84.  The one-time dramatic actor later gained fame as a deadpan comic star in Airplane! and the Naked Gun movies.

Reminiscing about the deaths of celebrities has proved to be a recurring topic in the New Media Index. The passing of actor Kevin McCarthy was the No. 2 story the week of September 13-17, 2010 and rapper Dolla was in the same slot the week of May 17-22, 2009.  TV pitchman Billy Mays was a popular subject from June 29-July 3, 2009 and the death of actor David Carradine was the second story from June 1-5, 2009.

“RIP Leslie, thank you for all the laughs,” eulogized Peter Bee.

“An amazing actor and comic. America’s favorite Canadian goofball. He will definitely be missed. I cant believe that he’s gone,” wrote Soulfully Poetic.

A few bloggers quoted lines from his movies. “Looks like I picked the wrong week to quit drinking,” wrote the Daily Irrelevant.

The third-biggest story on blogs (at 12%) was a George Will column in the November 28 Washington Post in which he argued against restricting children’s access to video games, on the grounds that it is simply a moral panic. Next, at 11%, was a December 2 Washington Post story about how federal stimulus money went to more sources than many people realized.

The fifth-biggest topic (9%) was a November 24 Washington Post op-ed by a George Washington University Law professor on why Transportation Safety Administration pat-downs and body scans are unconstitutional. One week earlier, the debate over TSA airport procedures was overwhelmingly the No. 1 topic among bloggers, at 54% of the links.

The TSA was also a major story on YouTube last week, as the second most-viewed news video showed a young boy being strip searched at an airport. The No. 3 video of the week, the November 22 edition of the Philip DeFranco Show, also mentioned the TSA pat-downs.

In the No. 1 video for the week, an incensed man in handcuffs yells at reporters in Portuguese.