With Election Day looming and some key races tightening, the 2010 midterms dominated the news agenda last week, registering their highest level of coverage to date.

For the week of October 18-24, the congressional election cycle accounted for 38% of the newshole, up substantially from 28% the previous week, according to the Pew Research Center’s Project for Excellence in Journalism. That also eclipsed the previous high water mark for this year’s midterm coverage (30%), which occurred from September 13-19 when tea party candidate Christine O’Donnell won a stunning victory in Delaware’s GOP senate primary.

Both of the central media narratives of this campaign gained momentum last week: The battle for control of the senate, highlighted by a number of very close races in crucial states; and the nasty tenor of many of these campaigns, including everything from sharp-elbowed ads to personal attacks.

One of the races that featured both of those elements was in Kentucky.  Democrat Jack Conway has been cutting into Republican Rand Paul’s lead according to some polls and last week, the campaign was marked by a controversial Conway ad questioning Paul’s religious beliefs. Rand and Conway were also among the individuals generating the most attention in last week’s campaign news.

The No. 2 story, at 12%, was the state of the economy. For the past month, that narrative has been fueled by the issue of fraudulent foreclosure procedures and the big news last week was that the Bank of America had decided to resume housing foreclosures.

The week’s No. 3 story (at 5%) was a media controversy that quickly morphed into a political issue. NPR’s firing of analyst Juan Williams—after he said on the Fox News Channel that he gets “nervous” and “worried” when he sees people in “Muslim garb” on planes—sparked a debate about journalistic practices and NPR’s decision. But the episode also became a catalyst for some conservatives to call for de-funding the public radio outlet.

The next two topics were about the two wars that have occupied America for the much of the past decade. News about Afghanistan was No. 4 at 3% of the newshole, with continuing reports of negotiations between the Taliban and the government of Hamid Karzai.

The No. 5 story (at 2%) was the release of new documents about the war in Iraq by the whistleblower web site WikiLeaks on October 22.  Among other things that generated headlines, the documents highlighted civilian casualties and torture and abuse of prisoners.

Back in the summer, in the week of July 26-August 1, WikiLeaks’ dissemination of documents connected to the war in Afghanistan garnered about six times the media attention:  13% of the newshole as the No. 2 story.  But some of that discrepancy in coverage levels can be attributed to the fact that the Iraq documents were not released until late in the week, on Friday. And in the period from October 22-24, the story accounted for 8% of the newshole.

In another illustration the media’s sometimes short attention span, the story of the dramatic rescue of 33 Chilean coal miners fell to 1% of the newshole from October 18-24. That comes only a week after the episode captivated much of the world and registered as the No. 2 story, at 21% of the newshole.

Crunch Time for the Midterms

The 2010 elections ran the table last week, registering as the No. 1 story in all five media sectors studied by PEJ.  As has often been the case, the subject dominated the two sectors that include the ideological talk shows—cable (57% of the airtime studied) and radio (52%). It also accounted for 33% of the network TV newshole, 28% for newspapers and 23% for news web sites. 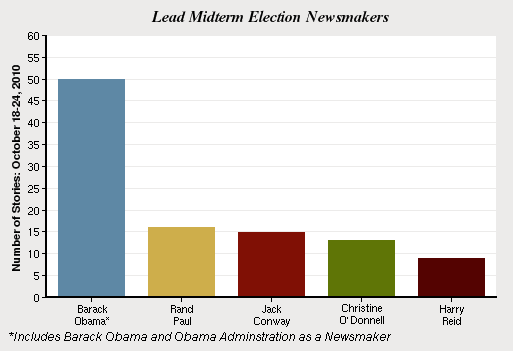 The key strategic storyline last week examined a series of nail-biting senate races that could determine whether the Republicans gain the 10 seats they need to control that chamber. And many media outlets focused on the same tight races.

Examining the electoral map on the October 19 edition of CBS’ Early Show, analyst John Dickerson concluded that at least four of these key states in play—West Virginia, Nevada, Colorado and Illinois—rated as tossups.  Focusing in particular on Nevada, where Senate Majority Leader Harry Reid is facing a tough challenge from tea party-backed Sharron Angle, Dickerson called the state, “the Democratic rescue mission.”

After showing footage from a debate in which the two attacked each other, correspondent Steve Brown said, “It’s fair to say that character is the issue which defines this race, of if you will, the attempts by the candidates to undermine each other’s characters.” Added anchor Megyn Kelly: “When you watch these two debate, you walk away feeling a little sick.”

But perhaps no race got as much media attention last week as the Kentucky contest between Republican Rand Paul and Democrat Jack Conway. Indeed, Paul and Conway were the second- and third-leading newsmakers in election coverage last week, registering as lead newsmakers in 5% of the campaign stories. (To be a lead newsmaker, someone has to be featured in at least 50% of the story.)

The catalyst for a good deal of this coverage was a much-criticized Conway ad that focused on a prank Paul reportedly pulled in his college days when he asked a young woman to bow down to and worship a god he called “Aqua Buddha.”

The Conway ad charged that Paul belonged to a “secret society that called the Holy Bible a hoax” and asked, “Why did Rand Paul once tie a woman up, tell her to bow down before a false idol and say his god was Aqua Buddha?”

Appearing on MSNBC’s Hardball program on October 18, University of Louisville professor Jasmine Farrier was critical of the spot, saying that “I think it brings Conway off message…unfortunately for Democrats, I don’t think they can hit below the belt very effectively.”

Somewhat lost amid all this skirmishing in key races last week was the overall sense that Republicans are likely headed for big win on Election Day, something that political analyst Stuart Rothenberg emphasized during an October 18 interview on NPR’s All Things Considered.

While stating that the Republicans may not gain the needed 10 senate seats, Rothenberg projected that they could pick up 40-50 seats in the U.S. House of Representatives (they need 39 to gain control) and declared, “It’s going to be a big Republican year…the landscape is tilted very strongly toward the Republicans.”

At 12% of the newshole, coverage of the economy was the same as the previous week and very much in keeping with recent levels of attention. Last week, that subject generated the most attention in the online sector (18%).

Several top themes drove the coverage including the news that the Bank of America was restarting foreclosure procedures in 23 states. And another element of last week’s economic coverage, about one-quarter, focused on an overseas event—the widespread strikes and protests in France over a government proposal to raise the retirement age from 60 to 62.

NPR contended that Williams, by making those comments about Muslims in his role as a Fox News commentator, ran afoul of an NPR rule that prohibits taking “personal public positions on controversial issues.” But the organization came under fire from a number of commentators, including former Democratic New York Governor Eliot Spitzer on his new CNN talk show.

Why did they fire him?” Spitzer asked. “Beyond me. I love NPR, I like listening to it, but firing him was a gargantuan mistake, just feeds the flames of the right.” His co-host, the more conservative Kathleen Parker, agreed saying “It was outrageous… this is just another victim of the thought police as far as I’m concerned.”

On October 24, NPR CEO Vivian Schiller apologized for “not doing a better job of handling” Williams’ dismissal, but defended the decision as necessary to protect NPR’s “integrity and values.”

Another aspect of  narrative included calls from some conservatives—from Fox host Bill O’Reilly to ex-Alaska governor Sarah Palin—to cut off public funds for NPR. (An NPR spokesperson responded in an October 22 Yahoo!News story, saying the network does not receive any direct public funding in a given year, but gets about 1% to 2% of its funds from competitive federal grants.)

As the central figure in this drama Williams proved to be the week’s No. 2 headline maker, registering as a lead newsmaker in 4% of all the week’s stories, behind only Barack Obama.

Despite all this, the Williams drama last week generated nowhere near the level of coverage of another famous media firing. In the week of April 8-13, 2007, the dismissal of talk show host Don Imus by CBS and NBC after he made crude racist and sexist comments about the Rutgers University women’s basketball team was the No. 1 story, filling 26% of the newshole. 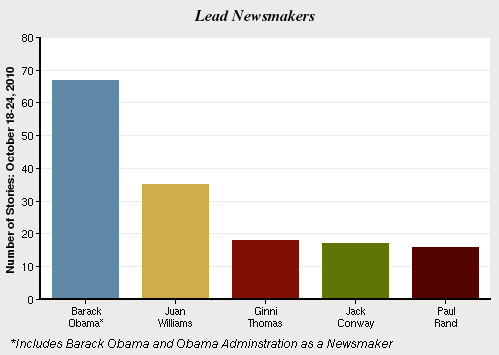 From October 18-24, President Obama was the top headline generator, registering as a lead newsmaker in 7% of all the week’s stories—due largely to his dominant presence as a newsmaker in the campaign coverage. The week’s No. 2 newsmaker (4%) was Juan Williams.

The third-leading newsmaker, at 2%, was Virginia Thomas, the wife of Supreme Court Justice Clarence Thomas. Thomas made news when it was learned that she had called Anita Hill—the woman who accused Clarence Thomas of sexual harassment during his 1991 confirmation hearings—and asked her to apologize. That was followed by the public surfacing of Lillian McEwen, a woman who dated Thomas several decades ago and claimed that Hill’s allegations rang true given what she knew about Thomas’s personal habits. (Hill herself was the No. 6 newsmaker at 2%.)

The No. 4 and No. 5 newsmakers last week were the two principals in Kentucky’s bare knuckled senate battle—Jack Conway (2%) and Rand Paul (2%).