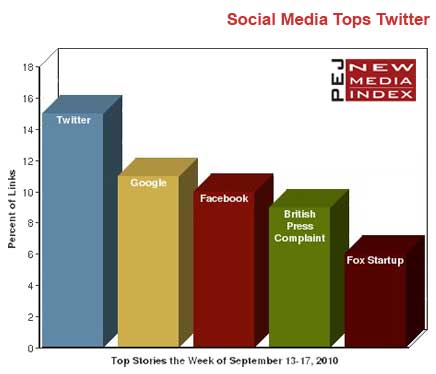 New developments in the tech world sometimes make mainstream news headlines, but they almost always generate major attention on Twitter. Last week was no exception as Twitter was dominated by developments and new products for leading social networking sites-and the announcement of a Google social network.

For the week of September 13-17, the top three stories on Twitter were about innovations by major players in the online world: Twitter, Google, and Facebook.  Combined, they made up more than a third (36%) of the top news links, according to the New Media Index from the Pew Research Center’s Project for Excellence in Journalism.

While a range of technology topics often lead Twitter’s news agenda, last week’s top stories were all focused on one very specific area: social media. Facebook, the preeminent social media tool, is still growing, especially internationally. Twitter, also a social networking tool, released a new layout last week. Google, an internet powerhouse, has struggled to create a successful social networking tool and the announcement of a planned social network from them could have a significant impact in this field.

And, as was the case last week, social media users often seem to function as announcers and reviewers of new online products.

A first look at the redesigned Twitter website from Wired’s blog Epicenter was the top subject, with 15% of linked tweets. A number of Twitter users complained, however, that they did not yet have access to the new site.

Those who used the new Twitter site shared their thoughts with others, including @tasarial who tweeted this screen shot and @Mrs_McFeealy, writing "New twitter is much more convient then the old one."* Others like @scottuses, made fun of it, saying, "You got the new twitter? How quaint. I’m already on the new new twitter. With lasers."

Google was the No. 2 subject, with 11% of tweet links. The focus was a September 15 Mashable article about Google Me, a new social networking site, expected to launch later this year.  Most Tweets about Google Me linked to articles discussing it and few users opined on the issue.

The third subject (10% of links) was based on another Mashable article on Facebook’s Places feature going live in the UK. The location feature allows users to check into real-world locations (similar to Foursquare) and was available in America a month ago.

Many Tweeters seemed concerned about what they saw as the intrusive nature of the feature.  @iova grumbled, "Great Facebook Knows what I like who are my friends all my personal info and now where I am with Facebook places! Get out of my life!" And @thehacksaw joked "Somewhat expecting tomorrow’s headlines to read ‘Facebook Places launched, house burglaries up 400%.’"

The No. 5 Twitter subject (at 6%) was another story about a new technology product: Bitbop, a new Android application that can bring streaming TV shows to smartphone users over 3G or Wi-Fi.

The one top-five Twitter story (9% of links) that was not about technology focused on a BBC article about a British sportscaster’s complaint that a TV show made an inappropriate comment about her sexual identity.

In a week in which no one subject really dominated the blogosphere, two stories tied for first place, with 13% of the news links. One, the war in Afghanistan, was a topic that also generated attention in the mainstream press, registering as the No. 4 story last week.

The other, the death of longtime actor Kevin McCarthy, was another example of bloggers’ tendency to reminisce about show biz celebrities, some of them more well-known than others, who have recently passed on. 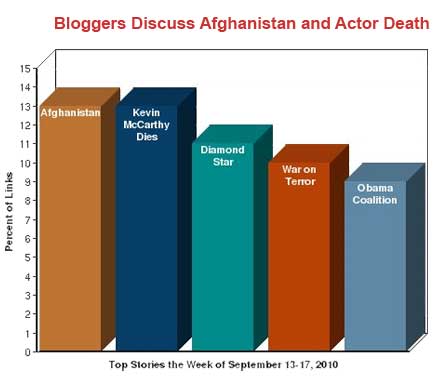 The next biggest story for bloggers (11% of links) involved a 2004 BBC article about the discovery of a diamond star that astronomers named Lucy.  It’s not clear why, but the article reemerged on the blogosphere last week, appearing on Space and Science and several other blogs-with none mentioning that the discovery was over six years ago. But some comments posted on the Daily Tech blog did notice the time lag. "Note the date on that BBC article…Monday, 16 February 2004," wrote elFarto. "Slow news day, I guess," responded MrTeal.

Wrapping up the top five most linked-to blog stories, at 9%, was a September 11 Los Angeles Times article about Obama’s crumbling electoral coalition.

The two stories about Afghanistan that were most linked-to covered different aspects of the conflict. The Washington Post ran an article on September 10 about the Department of Defense attempting to buy the entire first printing of a memoir by a former Defense Intelligence Agency officer, in order to keep the book from the public. The book reportedly recounts planned covert operations that were shut down by military officials concerned about offending Pakistan.

"It’s unlikely that this effort at suppression will work very well…It’s tough to kill off information that’s already out there," Stephon Ty wrote on his blog.

Can’t Win For Losing agreed.  "So what if I told you that the government was attempting to completely destroy a book? You’d call that censorship, right? Yeah.. me too. Except for that’s exactly what the Defense Department is planning on doing to the entire first printing of Operation Dark Heart written by a former Defense Intelligence Agent."

The other article was a Los Angeles Times article about a deadly Afghani demonstration against Rev. Terry Jones’s plans to burn a Koran, which he eventually abandoned.  The planned Koran burning was the fifth-biggest story on blogs in the NMI two weeks ago.

"[T]hanks to Pastor Jones, demonstrations against his plans turned fatal in Afghanistan, leaving two dead. This is really helping our international reputation…not" said Danielle Chavez, a blogger for Write for the Right.

Some well-known people weighed in on the issue via blog as well. Former senior policy advisor and speechwriter for President George W. Bush, Michael Gerson wrote on the blog the Roosevelt Room, "It is a horrifying wonder of the Internet age that a failed, half-crazed Florida pastor with a Facebook account can cause checkpoints to be thrown up on major roads in New Delhi, provoke violent demonstrations in Logar province south of Kabul, and be rewarded with the attention of America’s four-star commander in Afghanistan and the president of the United States."

Kevin McCarthy, an actor best known for his role in the 1956 sci-fi classic "Invasion of the Body Snatchers" and the 1951 film "Death of a Salesman" died at age 96 on September 11.  His Los Angeles Times obituary was frequently linked-to in blogs.

While famous people like Michael Jackson and Ted Kennedy generate major headlines in the mainstream media when they die, somewhat lesser luminaries have a tendency to be featured more on blogs. For example, web tributes popped up for rapper Dolla for the week of May 17-22, 2009, TV pitchman Billy Mays was a popular subject from June 29-July 3, 2009 and the death of actor David Carradine was the second story June 1-5, 2009.

J. Kingston Pierce of The Rap Sheet wrote a list of shows in which McCarthy starred, writing, "I remember that his was a familiar face on boob-tube programs from the 1950s through the ‘90s…Thank you, Mr. McCarthy, for your lifetime of entertainment."

"He maybe wasn’t one of the greats-but maybe he should have been. Godspeed, Kevin," wrote Jay W. on Nighthawk Postcards.

On the video sharing site YouTube, popular host Philip DeFranco dominated last week. The No. 1 video from two weeks ago of DeFranco’s weekly show came in third place last week with almost a million views, and a "pilot episode" of one of his new shows, Fail Friday, was the fourth most popular. In sum, these two videos had over 1.6 million views during the week, more than any other video.

There are several popular YouTube shows hosted by people who post their own commentary along with items they find interesting in the news or on the internet. DeFranco’s popularity has pushed him to the top of the list of most-viewed news clips before (April 12-16, August 23-27 and September 6-10). But this is the first time he has had two separate videos in the top-five list.

The No. 2 video was footage of the fire that erupted after a gas line ruptured in San Bruno, California, taken by a videographer who lived up the hill from the fire, according to a blog account. The video showed the thick smoke and fire along with helicopters responding to the scene. It was uploaded September 9 and had over a million views by the end of last week.