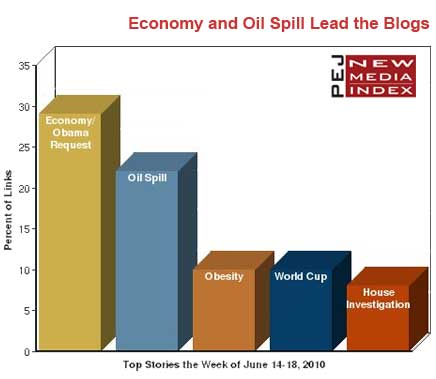 Eight weeks after the oil rig explosion in the Gulf of Mexico triggered one of the largest environmental catastrophes in the country’s history, attention to the subject hit unprecedented levels in social media last week.

While the disaster has consistently garnered major coverage in the American mainstream press over the past two months, it had not been a major subject of interest in blogs or on Twitter.

But from June 14-18, 22% of the news links on blogs and 14% on Twitter were about the oil crisis according to New Media Index from the Pew Research Center’s Project for Excellence in Journalism—the highest levels for the story in both platforms.

Why did social media interest in the topic spike dramatically last week? It’s not entirely clear, but it was a week in which the oil story clearly became more political and Washington-centric. President Obama delivered an Oval Office speech, BP officials met with Obama, and BP boss Tony Hayward faced a tough grilling on Capitol Hill.

Twitter’s most linked-to news stories tended to be more about BP executives, while blogs linked more often to news about the spill itself. In the conversation that ensued, bloggers in particular displayed a significant level of distrust towards both BP and federal officials.

Politics also put the economy back in the top seed on blogs (29% percent of the links). Conservative bloggers reacted strongly to President Obama’s urging of Congress to approve nearly $50 billion in emergency aid to state and local governments. Most criticized Obama for wasting taxpayer money.

This marks the first time in seven weeks that the economy has ranked among the top five subjects on blogs.

The next two topics on blogs, both at 10%, moved well beyond the Washington focus. One was a warning based on 2010 Dietary Guidelines for Americans that obesity is “the single greatest threat to public health in this century.” Another was a BBC report that organizers of the World Cup in South Africa will not ban the plastic horns known as vuvuzelas despite complaints from players and fans.

But politics returned at number five, with a report about an investigation of eight House members who held fundraisers with business lobbyists prior to the vote on a Wall Street reform bill.

On Twitter, typically known for its focus on technology, the top story (15% of all links) was about Twitter itself—namely a CNET report that a failed upgrade of the site’s software the night of June 14 left the site unusable for many.

Just after that (also at 15%) came a story that had not been among the top five Twitter subjects since the week of January 4-8: the war in Afghanistan.

Two Afghanistan-related stories generated links from Twitterers including a Fox News report that the U.S. military had issued a nationwide alert for 17 members of the Afghan military that had gone AWOL from an Air Force base in Texas. The other was a Wired story about a contract from the U.S. military with Northrop Grumman to build spy blimps for use in the war. 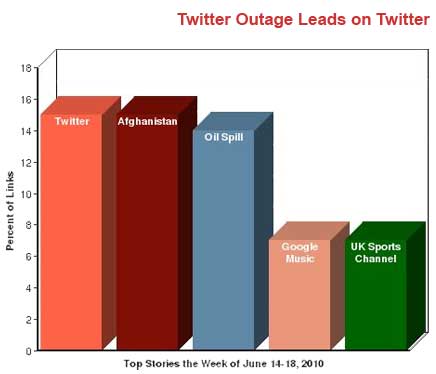 After the oil spill (No 3 at 14%), the No. 4 subject on Twitter was the news that Google might be launching its own music service in the fall (at 7%). Next was a BBC report, also at 7%, that the British 24-hour sports news channel Sky Sports News was becoming a pay-TV channel after eight years of being available for free.

On the video-sharing site YouTube, the most-viewed news video was of Rep. Bob Etheridge’s (D-NC) physical confrontation with two unknown men claiming to be students who asked him questions while he walked down the street.

The video became a political embarrassment for the Congressman and was viewed almost 2.5 million times last week alone.

Social media users linked to a wide range of stories regarding the ongoing crisis. On Twitter, for example, the tweets focused mainly on BP. Many linked to a June 15 BBC report that BP’s credit rating was downgraded by Fitch Ratings—one of world’s biggest credit rating agencies—or to a June 16 MSNBC report about an apology from BP’s Chairman Carl-Henric Svanberg after he had referred to those affected by the spill as “small people.”

Bloggers seemed to focus more on the spill itself. Some pointed to the June 15 Washington Post report that the government’s estimate of the size of the spill had risen to as much as 35,000 to 60,000 barrels escaping each day. Others linked to a June 14 investigative report by the Los Angeles Times that some of the malfunctioning equipment at the oil rig was inspected by foreign governments such as the Republic of the Marshall Islands and not the U.S. government.

A number of bloggers voiced their distrust of the information they were receiving.

“BP is currently capturing only about 15,000 barrels a day from the spill,” pointed out Sara Beth at 1115.org. “That no longer sounds as impressive as we were once invited to believe.”

Others focused on who was to blame for the situation.

“Why aren’t the mayors, governors, senators, and representatives of the Gulf coast states SCREAMING about all this?” asked Eowyn at Fellowship of the Minds. “Aren’t they PAID A HANDSOME SALARY to represent the interests of their constituents? Are they not sworn to protect the United States of America? Where’s their outrage?”

“The gulf oil spill tragedy began long before the actual spill…the previous administration did all it could to weaken any governmental oversight, and regulations were written by industry lobbyists and not those who had concern for the environment or those who live in it,” suggested flyin ur eye.

Following Obama’s June 15 speech from the Oval Office and the announcement the following day that that BP would pay $20 billion into an escrow account to cover damage claims, the focus turned to the President’s performance.

“It’s no surprise that President Obama would take to the airwaves to address the catastrophe in the Gulf,” wrote Jeff Mays at Black Voices. “I was disappointed, though, that Obama’s speech did not detail how the spill will be stopped.”

“The Talk Sucked, but the Walk is not that shabby at all!” decided Jake Today. “Obama sat down with BP execs and 20 minutes later he had a $20 billion down payment on the Gulf repair job…and an apology from the BP chairman. Now that’s 20 minutes well spent. Hmm, can we have a lot less talk and a lot more walk please.”

“As predicted from day 1, every single one of the environmentalist agenda’s wildest dreams will start being enacted under the guise of the Obama administration’s new-found crisis,” warned Ryan G at Beacon of Truth.

Money for the States

Obama’s request for $50 billion in state and local aid to help prevent layoffs of teachers, police, and firefighters was met with enormous skepticism by conservative bloggers.

“How much blood can Obama drain from a body that is already struggling to survive, until the point is reached where it simply collapses under its own weight, and perishes?” wondered The Jersey Nut. “Looks like Professor Obama is interested in finding out…”

“It doesn’t appear that President Obama has a game plan to help the economy, other than continuing to feed the already-bloated public sector,” added Bill Roberts at Daily Brisk.

There were a handful of liberal voices who argued that Obama’s additional request vindicated warnings from some left-wing economists, such as Paul Krugman of the New York Time that the initial stimulus bill passed in 2009 was not large enough to lower unemployment.

After quoting a Krugman blog from January 2009 warning of the dangers of a weak stimulus, Jed Lewison of the Jed Report wrote, “Flash forward to today, and the only thing that Krugman was wrong about was that the unemployment rate peaked at over 10 percent…Instead of talking about things like domestic spending freezes and deficit reduction commissions…the President should spend more time making the case that the best way to get the budget in balance is to grow the economy — thereby increasing revenue.”

The most viewed news video on YouTube last week was an embarrassing moment for a member of Congress. Two unknown men claiming to be students asked Rep. Bob Etheridge (D-NC) “Do you fully support the Obama agenda?” as he walked down the street.  The Representative then grabbed one of the men and demanded to know their identities.

The video was first posted on the conservative website Biggovernment.com and became a widely-disseminated embarrassment for Etheridge in a short period of time. He later issued an apology for his behavior.

Meanwhile, the identities of the men who filmed the video are still not known.

For the examination of the links from Twitter, PEJ staff monitored the tracking site Tweetmeme. Similar to Icerocket and Technorati, Tweetmeme measures the number of times a link to a particular story or blog post is tweeted and retweeted. Then, as we do with Technorati and Icerocket, PEJ captured the five most popular linked-to pages each weekday under the heading of “news” as determined by Tweetmeme’s method of categorization. And as with the other data provided in the NMI, the top stories are determined in terms of percentage of links. (One minor difference is that Tweetmeme offers the top links over the prior 24 hours while the lists used on Technorati and Icerocket offer the top links over the previous 48 hours.)