Of the three social media platforms studied, news-oriented blogs share the most similarities with the mainstream press. Bloggers almost always link to legacy outlets for their information, and politics, government and foreign events garnered the greatest traction.

There are, however, also some clear differences. While the biggest topic areas overlap, there was considerable divergence in the specific news events that garnered attention. In less than one third of the weeks did the blogosphere and traditional press share the same top story. Bloggers tend to gravitate toward events that affect personal rights and cultural norms – issues like same-sex marriage, the rationing of health care or privacy settings on Facebook, while traditional media news agendas are more event-driven and institutional.

And a strong sense of purpose often accompanies the links in blogs and social networking media. In many cases, it is voicing strongly held and often divisive opinions. After the botched terror attack on Northwest Airlines Flight 253 on Christmas Day, for instance, a number of conservative bloggers immediately blamed Obama, while others claimed that the fear of terrorism had become larger and more irrational than it should be.

In others, the function was more to share personal connections to events or to take action.

“I’m not one to buy into mass hysteria, but I am AFRAID of this swine flu,” admitted blogger mooneyshine the week that the H1N1 virus threatened to become a global pandemic. “I ain’t landing in the hospital with no pig virus. Suddenly Piglet is not so cute anymore.”

Alongside these more heated discussions, bloggers also enjoy sharing and commenting on unusual or off-beat findings and events buried deep in other media coverage.

In the broadest sense, the top news agenda in the blogosphere coincides with that of the traditional press; politics and foreign events are the topic areas linked to most often. The next most popular subject areas, however, tend to differ; science stories – often off-beat findings – were the No. 3 subject area in blogs and social media pages, followed by technology related news. (Those topics are much less popular in the traditional press).

In 2009, bloggers, like the mainstream media, were caught up in assessing the first year of the Obama administration. Fully 17% of the top five stories each week related to U.S. politics and government affairs, particularly the new president. This is similar to the level of attention in the mainstream press (15% of the newshole during that same period, according to PEJ’s News Coverage Index).

In February, as Congress debated the economic stimulus package, for instance, bloggers clashed over the list of programs included in the bill.

Conservative bloggers scorched the bill as being full of wasteful programs that lacked any economic benefits. “Take a look at some of the absolute garbage the Democrats are filling this bill with,” the conservative blog East Coast Mark charged.

“Everything on the Republican list of ‘wasteful projects’ is stimulative,” countered Gregg Carlstrom on Fedline. “$88 million for a new Coast Guard icebreaker? Someone is getting paid to build the ship.”

Often bloggers make the issues and events highly personal. Linking to an interactive feature on the New York Times website that compared every presidential inaugural address since 1789, Elisha Blaha shared,  “This is what I will tell my kids…I will tell them that I clapped my hands and stood on the couch as President Obama walked out on to the stage to cheers. I will tell them that I was gitty with excitement and so proud of the confident man who now represents my country.” [1]

The second-biggest subject on blogs in the year was foreign events. Fully 12% of the top stories in blogs dealt with international events ranging from the protests in Iran to a vote on the number one song on the Christmas British pop charts. Access on the Web to overseas news outlets like to the BBC and the Guardian as well as prominent British bloggers buoys this tendency.

As with much of the domestic news agenda, many of the foreign event stories that inspired blogger interest received far less attention in the traditional American press, even if the stories linked to were originally found there.

A comment by a judge in Saudi Arabia that it was acceptable for husbands to slap wives who spend too lavishly, for example, was the second-biggest story one week in May, drawing large amounts of criticism in the blogosphere. It received almost no attention in the mainstream press.

"Isn’t it ironic that a woman can be punished for spending too much money on a garment that they are forced to wear to authenticate their status as secondary citizens in a patriarchal society," remarked Womanist Musings.

Other popular topics often took on a less serious, or at least less divisive, tenor.

Science (at 10% of the top stories) was the third-largest topic on blogs and social media pages. That compares with just 1% of the newshole in the mainstream press, the No. 23 subject. Much of the interest here was in off-beat scientific findings, such as the research at the University of Sussex that showed cats have learned to manipulate their owners’ emotions by emitting a specific kind of purr, the discovery of a new kind of large rat in Papa New Guinea, news that a chemical found in blue M&Ms might have therapeutic qualities, and the discovery of a meat-eating plant in the Philippines.

Technology (8%) was less of a draw in blogs and social media than on Twitter (where it accounted for 43% of all links), but it still outpaced the mainstream press (1%). The technology stories that attracted the most attention were often those about problems or dangers. News about an email phishing scam that compromised at least 30,000 email passwords around the world, for example, accounted for 45% of the links one week in October as bloggers spread warnings about how to prevent becoming a victim.

There was often a personal tone here, suggesting a sense of highly engaged citizens talking to each other. "It obviously bears repeating; NEVER give out your username and/or password to anyone. Ever. Not by phone, email, snail mail or in person," warned the Enertiahost Blog. "Legitimate companies will never solicit you for your personal information . . .”

Sprinkled in were stories of general technical interest: The unveiling of new gadgets such as a new version of the Kindle, an interview with the founders of Twitter, and the experiences of a 13-year-old British boy who used an old-fashioned Sony Walkman for a week to help mark the 30th anniversary of portable music technology, for instance, are examples of the kind of stories that attracted significant attention.

Bloggers also showed a propensity to want to pay respect to celebrity figures that passed away, and in many cases these were lesser-known celebrities such as TV pitchman Billy Mays and comedian Dom DeLuise. Most of the time, the attention to celebrity deaths was intense and fleeting.

Of the 17 times (7% of all stories) that a celebrity-focused story made the top five stories  for blogs in a specific week, 12 of them (71%) involved a death. And that does not include the two additional weeks where new information following the death of pop icon Michael Jackson earned one of the top spots.

The environment (4%), and most specifically the issue of global warming, was also a topic of conversation more often in the blogosphere and in social media pages than in the mainstream press (2%). The passion here was strong enough that stories about global warming made the roster of top five stories in eight different weeks.

Much of this attention was on the so-called “climate-gate” scandal that took the blogosphere by storm in December after hacked emails from a British research unit raised the possibility of climate data manipulation. This discussion was led by voices like that of Teófilo de Jesús at Vivificat who call the science behind global warming “a fallacy.”

Bloggers also demonstrated over the year a tendency to weigh in heavily on stories involving changes in society, ranging from the relatively trivial to hot-button cultural issues. These linked-to stories cut across topic areas with an emphasis on adding their voices to conversations that might otherwise be outside their purview.

Social media circles strongly rejected revised privacy settings on Facebook, for instance, campaigned against changes to the design of Tropicana’s orange juice container and objected to content fees for streaming music online. On five separate occasions (2% of the top stories), bloggers repeatedly voiced strong support for the right to gay marriage. Those conversations were often spurred by state legislation or proposals that received minimum attention in the national press.

Despite the unconventional agenda of bloggers, traditional media still provides the vast majority of their information. More than 99% of the stories linked to came from legacy outlets like newspapers and broadcast networks. American legacy outlets made up 75% of all items.[2]

Web-only sites, on the other hand, made up less than 1% of the links in the blogosphere.

BBC News led the list of individual sources, constituting 23% of the links studied. 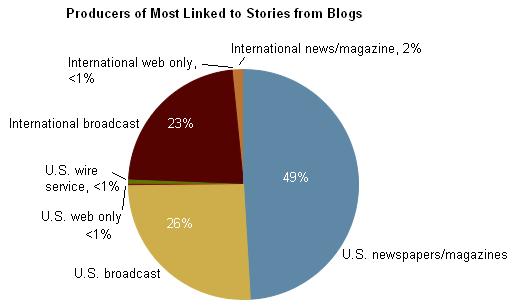 The next three largest sites were the traditional American media outlets of CNN.com (21%), the New York Times (20%), and the Washington Post (16%).

Just one other news site based outside of the U.S., The Guardian, received even 1% of the links.

Bloggers also tended to refer to different outlets for different topics. Newspapers were frequently the sources for stories about politics and government. Fully 44% of the stories linked to from USA Today were on those topics, 34% for the Los Angeles Times, 28% for the Washington Post and 19% for the New York Times. 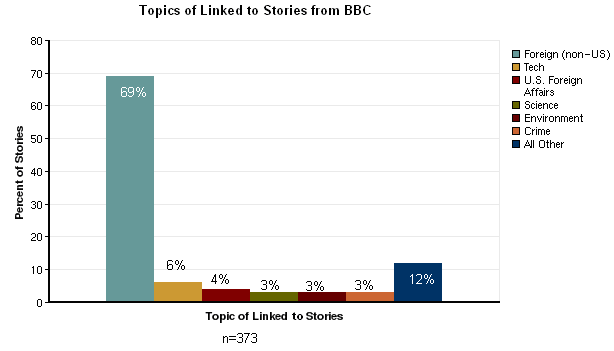 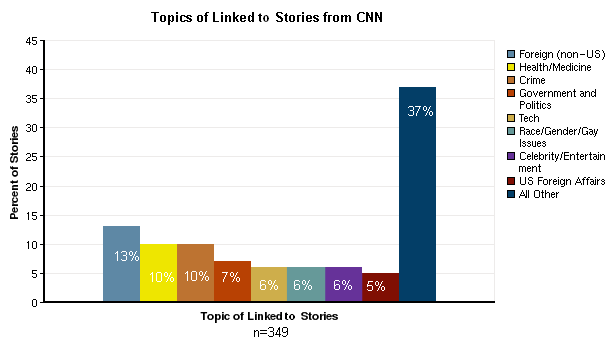 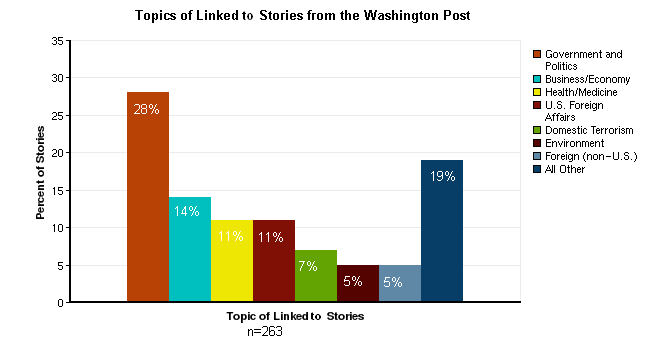 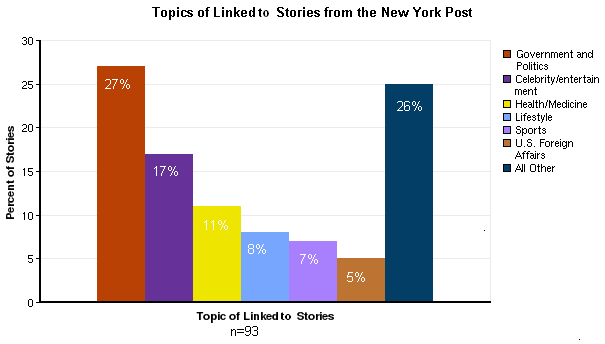 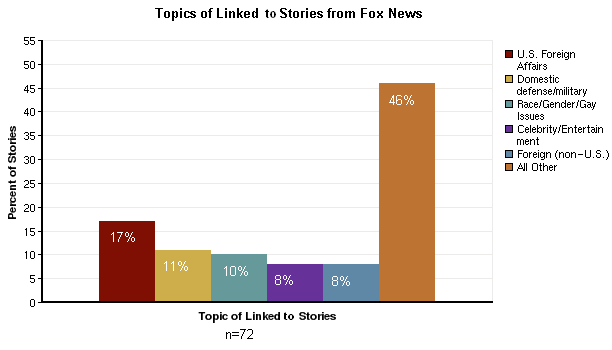 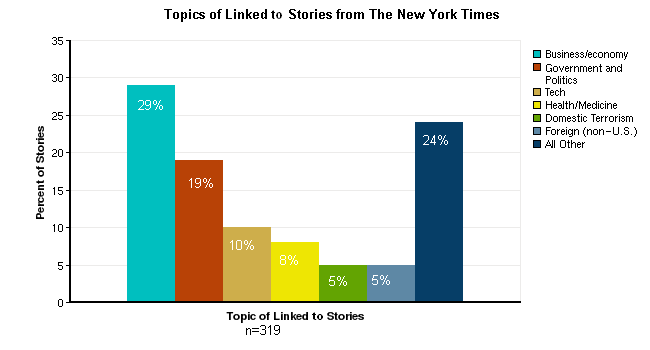 The New York Times was more often linked to for business and economics news (28% of its links). Another 10% related to technology, while two other popular newspapers, the Washington Post and the Los Angeles Times, had no technology-focused stories in their mix.

CNN.com was a source for international news (13%), health news (10%) and crime news (10%), while only 7% of CNN’s stories were focused on politics or government.

For celebrity news, the New York Post, the tabloid owned by Rupert Murdoch, was a major source, as 17% of the links directed toward its stories were on that subject – more than any other outlet.

And Fox News was the sole source for domestic defense and military news links, accounting 11% of all Fox News links and 100% of all U.S. defense stories.

For the most part, bloggers linked to news accounts rather than editorials or op-eds. Fully 87% of the stories linked to were straight news accounts, compared with only 13% that were opinion columns.

For example, the No. 1 story the first week of September was a Washington Post op-ed where columnist George Will advocated for a pullout from Afghanistan. It was an opinion by a prominent conservative that sparked conversation in the blogosphere rather than reporting on new events or facts.

Other sites, however, were linked to primarily as sources for straight news accounts. Almost all (97%) of the stories linked to on CNN and the BBC (96%) were news reporting.

Footnotes:
1. For the sake of authenticity, PEJ has a policy of not correcting misspellings or grammatical errors that appear in direct quotes from blog postings.
2. The data discussed in this section refers to all of the stories and links collected from blogs as part of the weekly NMI sample, regardless of whether that subject made the list of top stories in the given week.