Amid Disasters, Bloggers Look to Score Some Partisan Political Points 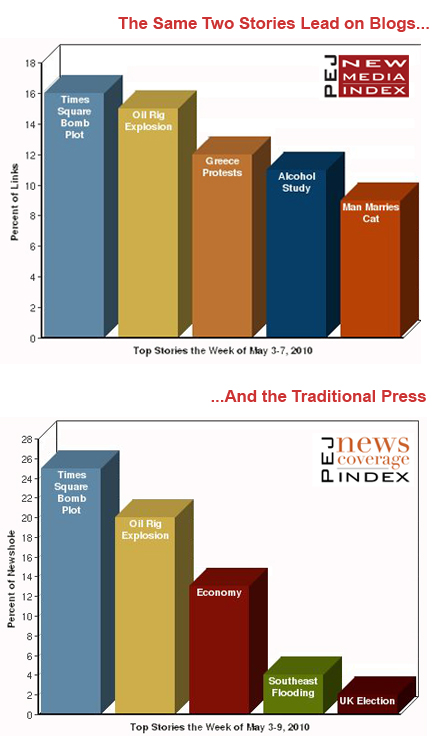 In many weeks, there are stark differences between the social and mainstream media news agendas. But last week, the same two stories that dominated the traditional press—the attempted bombing in New York’s Times Square and the oil spill in the Gulf of Mexico—also drew the most attention in the blogosphere.

And in both storylines, much of the commentary from bloggers was overtly partisan and polarizing as they searched for political villains.

For the week of May 3-7, 16% of the news links on blogs were about the failed car bomb attempt according to the New Media Index from the Pew Research Center’s Project for Excellence in Journalism. That was followed closely by discussion of the Gulf Coast disaster, which received 15%. (In the mainstream press last week, the terror attempt accounted for 25% of the newshole and the oil leak was 20% according to PEJ’s News Coverage Index.)

Conservatives dominated the commentary about the failed bombing, mainly faulting the Obama administration for how it handled the situation. These bloggers claimed it was too hesitant to call the attack a “terrorist” plot and that Obama had not adequately protected the country from attack. A far smaller group lauded the government for the quick arrest of the suspect.

Liberals voices rang stronger when it came to the oil spill, though conservatives also chimed in. Many pointed to a Washington Post story by Dana Milbank that chided conservative politicians who rail against “big government,” but then ask for government assistance when a catastrophe occurs. Some conservatives pointed to a different Washington Post story which reported that the Interior Department had exempted energy company BP from an environmental analysis last year. Those bloggers charged that the Obama administration deserved blame for faulty oversight.

The next biggest stories in the blogosphere all originated overseas.

Third, at 12%, were the protests in Greece that turned violent following that country’s economic turmoil. That was followed (at 11%) by a study of Dutch adults that showed that moderate drinkers of alcohol may have a healthier lifestyle and a lower risk of diabetes than both non-drinkers and heavy drinkers. And fifth, at 9%, was a story about a 39-year-old German man who unofficially married his dying cat.

On the social networking site Twitter, Apple was once again the dominant topic of conversation. The company has overwhelmed all other subjects on Twitter in the last few months. This is the third week in a row it was the leading subject and the seventh time in the last nine weeks the topic has been among the top five.

Last week’s attention (17% of all links) involved several different Apple-related stories including a Wired article called, “5 Things Apple Must do to Look Less Evil.” The suggestions ranged from publishing rules for its applications store to formalizing relationships with news publishers.

The second-largest story on Twitter (at 13%) involved one of Apple’s main competitors—Microsoft. Two CNET stories drew attention, including a report that its Web browser had dipped below 60% of the market and that the company was launching a new social-media aggregation tool called Spindex. 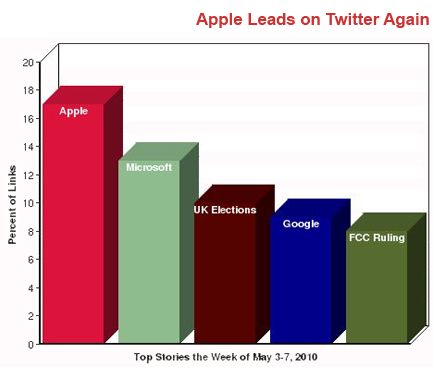 Stories about the UK general election, which saw the ouster of the Labour Party from power, were third at 10%. That was followed by a report that Google had purchased Bump Technologies, the maker of a 3D desktop application called BumpTop (9%) and a story that the Federal Communications Commission was likely going to impose “net neutrality” rules on broadband providers, at 8%.

The attempted bombing of New York’s Times Square occurred the evening of Saturday, May 1, but little details about the motive or people involved were known at the outset. It wasn’t until Monday night that police arrested a Pakistani-born U.S. citizen named Faisal Shahzad.

At that point, terrorism emerged as a primary motive and bloggers weighed in heavily— in most cases coming down hard on the Obama administration.

“Let’s be aware of this: were it not for technical difficulties last weekend in NY, and in the air last December 26th, we’d now be talking about two successful terrorist attacks on America, in the last 6 months,” charged Elizabeth Scalia at First Things. “These are real attacks. They count. The only thing that has kept them from being deadly has been the incompetence of the terrorists, and some eagle-eyed civilians.”

“The president is expanding government social programs…while he’s reducing funding for the most important constitutional obligation the federal government has to its citizens, defense,” asserted Kim Priestap. “How much will the American people tolerate before they accuse Obama of refusing to perform his constitutionally mandated obligation of protecting the country and her citizens from attack?”

On Tuesday, investigators began to focus on the involvement of the Pakistani Taliban, and criticism of Obama continued.

“Faisal Shahzad…became a naturalized US citizen in April, 2009,” wrote talk radio host Tammy Bruce on her blog. “Almost immediately after gaining citizenship, Shahzad left for Pakistan and returned this February. Thank goodness Obama’s gang was focused on the dangers of Tea Party Patriots while this guy put his car bomb together.”

While in the clear minority, a few bloggers expressed gratitude to the government for its quick apprehension of the suspect.

“Provided they can convict this guy (and it sounds like they can), it’s nice to see the wheels of state, local, federal law enforcement moving this smoothly in a media-fishbowl terrorism case like this one,” acknowledged Nate Sullivan.

“Things work the way they were supposed to,” added Jason’s View from DC. “It showed what can be when faced with an imminent threat and how to pursue those perpetrating that threat. We should all be very proud of what’s happened over the last 48 hours.”

Ever since the oil rig in the Gulf of Mexico exploded on April 20 and led to millions of gallons of leaked oil, part of the discussion has been about who to blame. Last week, bloggers focused mainly on the culpability of politicians.

Many liberals cited a Washington Post piece by Dana Milbank that criticized conservative officials, such as Sen. David Vitter (R-La.) and Louisiana Governor Bobby Jindal, who had previously railed against government spending, but were now asking for government assistance in cleaning up the spill.

“This is the same Bobby Jindal who thought it was fudging hilarious to even consider having the government provide more funding for volcano monitoring,” posted Bob Cesca. “And now he suddenly wants lots of federal government handouts. Money and resources that are—how do they put it?—redistributed from other places…What gives, Republicans?”

“The money that will be poured into those states over the coming months and years as a result of this man-made tragedy, however, should still be sent,” concluded Diane at Cab Drollery. “That’s what government is supposed to do when some of its citizens—no matter where they are located—are hit by tragedy. Even the small government bozos are having to face up to that.”

Some conservatives, however, focused on a Washington Post report that the Interior Department had exempted BP from a detailed environmental impact analysis last year.

“BP Was a Big Contributor to Obama Campaign,” announced Debra Moore at Exposing Liberal Lies while also citing data from a Politico story. “I find it rather interesting that President Obama is quick to demonize those who are his biggest supporters…Now, his most current target is BP. And guess which political candidate was the biggest recipient of BP funds?”

The most popular news video on YouTube last week included comedic performances from President Obama and late night host Jay Leno at the May 1 White House Correspondents Dinner. Leno was disparaged by a number of critics for a lackluster performance.

The Gulf oil spill was also the subject of two of the five most viewed news videos.

The second video was a May 1 news report from Al Jazeera English that animated several of the options that engineers could attempt to try and contain the leaking oil.

While the report does not differ much from many of the American broadcasts about the clean-up attempts, it is noteworthy that the most popular clip on the subject came from Al Jazeera English and not one of the traditional American broadcast stations.

This particular clip was viewed almost a million times in a week.

The third video was a 50-second clip showing the oil burning at the site of the explosion. The video was taken from nearby the accident and gives the viewers a unique perspective of the extent of the catastrophe.