Wall Street, Nukes and a Volcano Top the News

The U.S. economy led the news last week, due to a handful of storylines that ranged from a debate over regulatory reform and growing concerns about the federal budget deficit to the fiscal situation in Greece. By the end of the week, however, the eruption of a volcano in Iceland that paralyzed travel in Europe was generating the most attention.

Stories related to the economy represented 16% of the newshole for the week of April 12-18, twice what the topic garnered the week before, according to the Pew Research Center’s Project for Excellence in Journalism. But no single element dominated the coverage in a week in which the government filed suit against Wall Street investment powerhouse Goldman Sachs.

The No. 2 story last week was the Icelandic volcano. It roared to life with a fiery eruption on April 14. The coverage started out as a science story, but quickly gained urgency as European governments shut down airports to prevent damage to jet engines from a cloud of airborne ash and debris. Experts said it was the biggest interruption of air travel since the 9/11 terrorist attacks in the United States. For the week, the volcano accounted for 7% of the newshole. But from April 16-18, it was the week’s top story, filling nearly one-quarter (22%) of the overall newshole.

The week’s third-biggest story (also at 7%), was nuclear policy, driven by coverage of a gathering of 47 world leaders in Washington to discuss the control of nuclear weapons.

The Tea Party movement came in at No. 4, with 6% of the newshole. Groups affiliated with the movement held protests on April 15—the deadline for filing tax returns—to call attention to their concerns about the size of the government.

Rounding out the top five stories last week was the health care issue, (4%) a subject whose coverage has plunged dramatically since the passage of health care legislation in late March.

Economy Back on Top

The economy returned to the top spot during the week of April 12-18, after falling to second place the week before. It last led the news agenda, at 10% of the newshole, the week of March 29-April 4.

A number of storylines drove the narrative last week, which combined for a sometimes confusing diagnosis of the nation’s economic health. On Monday, a panel of economists that keeps the records on economic cycles was unable to say if the recession was actually over. Unfazed, the stock market surged past the 11,000 mark for the first time since September, 2008, fueled in part by strong earnings announcements and news that European leaders had agreed to extend credit to the government of Greece to head off a default.

The confusing nature of the economic data was reflected in an April 13 segment on the Today show.

Co-host Meredith Vieira opened on a note of uncertainty: “Mixed messages: the Dow hits 11,000 for the first time in a year and a half, on the same day experts warn that it is premature to declare the recession over. So what does that mean for the millions who are struggling to make ends meet?”

Later in the segment,  Jim Cramer, host of the CNBC program Mad Money, saw no ambiguity in the economic tea leaves: “Things are getting better and it is not a mixed message…We are seeing a resurgence of large American companies—which is what the Dow is made up of. It’s all positive. I’m not going to say it’s a mixed message.”

The top category of economic news during the week was the financial sector, at 19% of the economic newshole. Among the big stories was news that the government had filed a civil suit against Goldman Sachs alleging fraud, as well as revelations about home lender Washington Mutual in the months prior to its seizure by regulators.

Also attracting headlines, and filling 17% of the economic newshole, were stories related to proposed regulatory reform of Wall Street and the fate of a bill now working its way through Congress with the support of President Obama, who hosted a meeting during the week with Congressional leaders on the topic.

An ancient volcano on Iceland began rumbling to life in March, but erupted with a bang on April 14.

Early coverage of the event focused on the residents of Iceland who were forced to flee the flowing lava and raining debris. But when air traffic control authorities shut down airports across Europe, the story shifted to grounded travelers sleeping in airports and scrambling for alternative modes of transportation.

As the New York Times reported on its website on April 15, “The shutdown, among the most sweeping ever ordered in peacetime, forced the cancellation of thousands of flights and left airplanes stranded on the tarmac at some of the world’s busiest airports as the rolling cloud—made up of minute particles of silicate that can severely damage airplane engines—spread over Britain and toward continental Europe.”

An Associated Press story posted by Foxnews.com on April 16 tallied the human drama of long lines and missed vacations as well as the financial losses suffered by airlines and vacation destinations.

"We made it all the way to takeoff on the plane. … They even showed us the safety video," said Sarah Davis, 29, a physiotherapist from England who was quoted in the story discussing her efforts to get to Los Angeles. "I’m upset. I only get so much vacation."

President Obama convened the leaders of 47 countries in Washington for a summit on nuclear proliferation, beginning Monday April 12. That assemblage accounted for almost all of last week’s coverage of the nuclear weapons issue, although a small portion was devoted to the recently signed arms agreement between the U.S. and Russia.

The coverage noted that it was the biggest gathering of world leaders in the United States—outside of the United Nations—since 1948. Announcements of developments, such as agreements for Chile, Ukraine and Canada to give up enriched uranium stockpiles, drove the coverage along with questions about the ultimate impact of the gathering and the administration’s trade-offs in pursuit of agreements.

The Wall Street Journal reported on April 12 that “President Barack Obama demonstrated ahead of a two-day nuclear-security summit that starts Monday how much he would bend on issues like human rights to advance nuclear controls that have climbed to the top of his foreign-policy agenda.”

The story noted that Obama met on the eve of the summit with Nursultan Nazarbayev, the head of Kazakhstan.

“Human-rights activists have criticized Mr. Nazarbayev for corruption and repression, but he has been praised by Obama administration officials for voluntarily giving up the massive nuclear arsenal left behind in the 1990s by the receding Soviet empire,” the Journal reported.

Protests by the Tea Partiers, mostly timed to coincide with tax day, accounted for 6% of the newshole April 12-18, That was slightly less coverage than the Tea Party protests generated last year at the same time (April 13-19, 2009), when the subject filled 7% of the newshole. 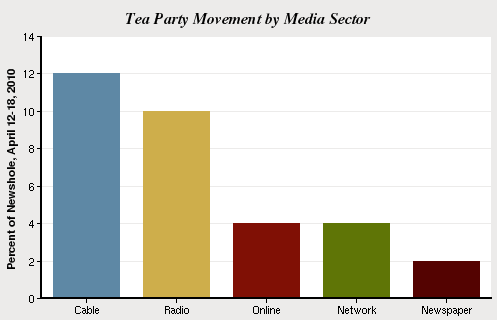 Coverage ranged from stories in local media about rallies in their areas to attempts by national media to explain the phenomenon and who the participants were. One story that generated considerable interest was a survey conducted by the New York Times that showed supporters of the movement tended to be male, white and well off.

The Tea Party topic generated the most coverage on cable and radio, the two sectors which feature the ideological, debate-driven talk shows, where it accounted for 12% and 10% of the newshole, respectively.

And even on cable, the coverage was not uniform. The story represented 8% of the newshole on CNN. On Fox, whose conservative talk-show hosts have been accused of promoting the movement, 12% of the week’s sampled coverage was devoted to the story. Rival MSNBC, with its liberal prime-time lineup, gave the movement more coverage than Fox during the week: 15% of its newshole in the PEJ sample.

The tone of coverage varied noticeably on Fox and MSNBC. Much of the prime-time Fox coverage portrayed the movement as a grassroots response to federal deficits as well as opposition to health reform and other policies supported by Democrats. Sean Hannity, on April 15, said the media was unfairly attacking the tea party movement

The hosts on MSNBC took a different tack, highlighting racially-tinged messages on signs carried by the protesters, for example, and raising the specter of anti-government rallies inspiring violence against the government.

Continuing a recent drop in media attention, health care reform came in at No. 5 the week of April 12-18, accounting for 4% of the newshole. Fully a third of the coverage was focused on the political ramifications of the recently enacted legislation. 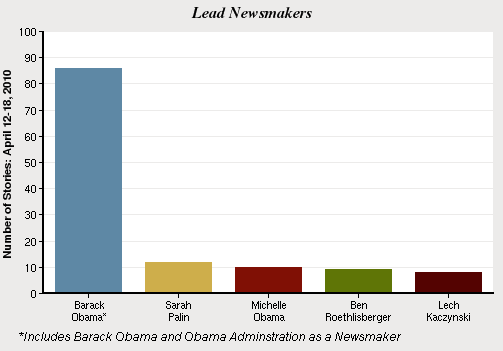 The No. 2 newsmaker was former GOP vice-presidential nominee Sarah Palin, who appeared at a Tea Party rally in Boston and was also the subject of stories related to first-class arrangements made for her planned speaking engagement at a college in California (the arrangements were revealed in documents students said they found in garbage). She was the lead newsmaker in 1% of the stories.

Michelle Obama, who made a surprise visit to Haiti, was the No. 3 newsmaker, also at 1% of the stories. The No. 4 newsmaker (1%) was NFL quarterback Ben Roethlisberger, who learned last week that charges would not be filed against him after an investigation into an alleged sexual assault in a bar. The late Polish leader Lech Kaczynski, who died in a plane crash in Russia on April 10, was No. 5, also at 1%.