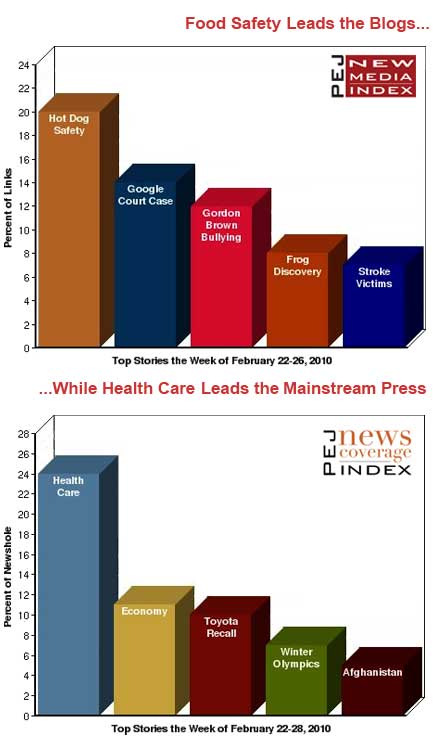 A warning about the potential health hazards of children chewing hot dogs triggered an impassioned backlash and registered as the top subject among bloggers last week.

From February 22-26, one-fifth (20%) of the week’s links in the blogosphere were in response to a group of pediatricians who called for a choke-proof hot dog, according to the New Media Index from the Pew Research Center’s Project for Excellence in Journalism. Most bloggers felt doctors were intervening in an area of responsibility reserved for parents.

Last week’s online hot dog discussion illustrated a sharp divide between social and mainstream media. The traditional press focused on the politics of  health care reform-driven by President Obama’s February 25 summit; The blogosphere used a very practical health matter to have a philosophical debate about risk and regulation.

Indeed, the legislative battle over health care reform was not among the roster of top social media stories last week. And the hot dog warning did not register in the News Coverage Index measuring mainstream media interest last week.

The No. 2 story among bloggers, receiving 14% of the week’s links, was a ruling by an Italian court convicting Google executives for allowing a violent video to be posted online. The judge found them guilty of violating privacy rights after a video of an autistic teenager being bullied appeared on Google’s video archive. Bloggers uniformly condemned the ruling as an impingement on freedom of expression and worried that it set a dangerous precedent.

Two other unrelated stories about search giant Google also combined to finish as the No. 1 subject on Twitter last we

The third story among blogs last week, with 12% of the links, was a scandal involving the behavior of British Prime Minister Gordon Brown. According to the BBC, several Brown staffers in recent years have called an anti-bullying hotline to complain, raising allegations that the Prime Minister mistreated some of his employees.

The discovery of the first monogamous amphibian, a poisonous frog in a rainforest in Peru, was fourth at 8% while a study that suggested brains of people who have suffered strokes can be "rewired" by teaching survivors to sing was fifth at 7%

On Twitter, the top three subjects were all Web and technology focused. The number one issue, with 17% of the links, was made up of two stories involving Google. One was a profile on Wired of the company’s complex algorithm while the other was a CNET story by a writer who decided to go one week without using any Google-owned services, such as Gmail or YouTube. 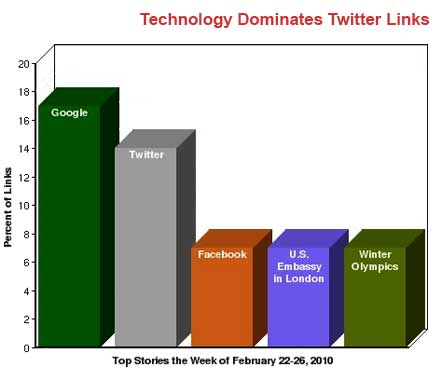 The second subject on Twitter, with 14% of the links, was about Twitter itself, including a story that reported on Yahoo’s purchase of the Twitter firehose, which will enable the company to add real-time tweets to search results and Yahoo profiles.

Stories about Facebook were third (at 7%), including a report about a Wisconsin teenager convicted of using the social networking site to blackmail classmates.

An article about plans for construction of a new U.S. embassy in London, the most expensive American embassy ever built, was fourth at 7%. And stories about the Winter Olympics, including a profile of the first ever South Korean skating medallalist, Kim Yu-Na, were fifth also at 7%.

According to the American Academy of Pediatrics, each year more than 10,000 children under the age of 14 go to the emergency room and up to 77 die after choking on food. And 17% of those cases, they claim, are caused by hot dogs. Last week, the academy released a statement calling for warning labels on hot dogs and for the food to be redesigned so it would be less likely to lodge in the throat of small children.

"What kind of message do we send to our kids when we mitigate against every little risk?" asked Dr. Melissa Clouthier. "We send a message that Americans are WEENIES. Kid-sized weenies and big, overbearing, obsessive parenting weenies."

"Labels and redesigning won’t help," declared Healthy Flavors. "Kids are going to choke on things. And stupid adults are going to feed babies hot dogs. It’s just humans being stupid humans. Maybe the academy can do more good by focusing on other problems. Like the horrible additives in our foods."

"…the only thing you need to ‘redesign’ a hot dog is a knife. Sheesh, people," wrote Ninja Fingers.

Others thought the request represented outside interference in basic parental responsibilities.

"It seems to me that by encouraging the FDA to ‘take a more active role,’ or requiring manufacturers to redesign their products in response to their findings, the AAP is missing the point by not placing a little more of the onus on parents to use a little common sense," posted Cinie’s World.  "After all, even if warning labels are placed on products like hot dogs, which oftentimes already carry them, it does no good if parents don’t heed them."

A few bloggers, however, did sympathize with the academy’s concerns.

"It was just this past Christmas that I was reminded how seriously these warnings need to be taken," described Jill Addeo at Kid Kupz.  "A man that works in our apartment building was, along with his wife, babysitting for his grandson. The 2 year old was given a hot dog for lunch and when his grandparents turned to check on him, he was choking, unable to make sounds. Although, they attempted to dislodge the hot dog and called for help, the baby did not survive…None of this is intended to be a ‘downer’ but rather a reminder that all those seemingly over the top warnings are out there for a reason."

The Google privacy convictions in the case of video showing the autistic teenager being bulllied drew the ire of the blogging community.

"Honestly, I can’t see how anyone would make a ruling in this manner and think that it makes sense," pronounced Superbalanced Blog. "Why not charge the execs of the company that made the camera that was used to film the incident? It’s hard to hear about this ruling and not consider the Italian legal system to be a joke."

Many feared a dangerous precedent had been set.

"This is a horrendous decision that could have international ramifications that threaten free expression on the Internet.  Hopefully the conviction will be overturned on appeal.  It’s impossible to overstate the impact and danger of this decision!" warned Mike Tully at Substantial Disruption.

"Clearly this case could have a huge impact on the future of the viability of video sites in Europe," wrote Forerunner Policy. "If this case is upheld it could lead to a precedent set across Europe (or at least Italy) where video sites (or possibly blogging sites?) are held responsible for the content their users submit. This would most definitely add a huge cost to operating a video site like YouTube and most certainly lead to sites like this being shut down, thus leading to a hugely important resource for free speech being closed off."

Some even called for technology companies to take action.

"They should present Italy with this ultimatum: Enact true freedom-of-speech protections and sane business laws within the next month or we will abandon you," advised Andrew D. Smith, a guest blogger on the Dallas Morning News Web site. "Failure to act, on the other hand, will only encourage Italy and every other dysfunctional nation to further shackle the Internet-a trend that would imperil the development of the world’s most precious resource. It’s worth taking a stand."

The two most-viewed news videos on YouTube last week were of golfer Tiger Woods’ February 19 mea culpa as he made his first public appearance in almost four months. In front of a group of select guests, Woods apologized for being unfaithful to his wife and vowed he would learn from his mistakes. The speech was originally carried live on numerous television stations before being posted online.

This follows a tendency for videos on YouTube to reach popularity about a week after the event itself.  Combined, the CNN video and the Fox News video of the event were viewed more than half a million times.