In a Diverse Week, a Stimulus Debate Drives the News

Fueled by the one-year anniversary of the $787 billion stimulus package, which offered yet another occasion for polarized debate, the U.S. economy topped the news agenda last week.

In all, however, the anniversary was not an overwhelming story. At 12% of the newshole from February 15-21, coverage of the economy was up only modestly from the previous week (10%), according to the Pew Research Center’s Project for Excellence in Journalism. But that was enough to make it the No. 1 story in a week when five stories filled between 7% and 12% of the newshole and four different stories were No. 1 in different media sectors studied in PEJ’s weekly News Coverage Index.

The No. 2 story, accounting for 8% of the newshole, was the Winter Olympic competition in Vancouver. The games accounted for close to a third (29%) of the news airtime on the three commercial broadcast networks. Host network NBC—with Brian Williams anchoring his evening newscast from Vancouver—devoted nearly 60% of its morning and evening news programming studied by PEJ last week to the competition.

The week’s No. 3 story, also at 8% of the newshole, was coverage of the conflict in Afghanistan. This time the focus was not on Washington-based policy deliberations, but on the major battlefield offensive against the Taliban in Marja.

Trailing closely behind Afghanistan was coverage of the 2010 off-year elections, (7%), which given its strong political orientation, was the top story in cable (13% of the newshole). The major event was the announcement by Evan Bayh, the moderate Democratic Senator from Indiana, that he would not seek re-election.

The fifth-biggest story (also 7%) was the revenge suicide plane attack on a Texas building housing Internal Revenue Service offices that left two dead. The event—which sparked a debate over whether it could accurately be labeled terrorism—was the week’s top story, at 16% of the newshole, in the period from February 18 (when it occurred) through February 21.

One story that just missed the top-five list (5%) was carried on live television during the late morning—Tiger Wood’s much anticipated February 19 mea culpa in the wake of infidelity allegations that surfaced after his Thanksgiving holiday car accident. The statement generated a torrent of widely mixed reviews about both its effectiveness and authenticity.

The Debate over the Stimulus

Last week, the economy was the top story in two of the five main media sectors—newspapers (18%) and radio (18%). Two storylines accounted for about half the coverage, a debate about the merits of the year-old stimulus package as well as the President’s creation of a bipartisan deficit commission.

A story posted on the FoxNews site on February 17 laid out the parameters of the stimulus argument.

“While the Obama administration and congressional Democrats are out in force this week touting the success of the $787 billion economic stimulus package, signed exactly one year ago, critics are pointing to a still-dismal jobs picture and deflating public confidence as signs that the ballyhooed benefits of the stimulus bill, as one GOP leader put it, were a ‘fiction.’”

Other media accounts indicated a more complicated picture. A report on NPR’s Morning Edition noted that “the White House and independent economists say the $787 billion stimulus program has helped to cushion the impact of the recession and boosted the nation’s payrolls by as many as two million workers. But that wasn’t enough to keep the unemployment rate from climbing above ten percent,” leading to “widespread skepticism” among the public.

ABC News, for its part, asked a panel of economists to grade the stimulus package and came up with an average mark of B minus. “Most of our panelists think the economy would be worse today without the big aid package,” the report added.

Olympic Success but Not Saturation

Coverage of the first full week of the Vancouver Olympics moved up to 8% from 5% the previous week. But it hasn’t proved as newsworthy as the most recent summer games, which were marked by U.S. swimmer Michael Phelps’ harvest of eight gold medals. At the same point in the 2008 competition from Beijing, the Olympics accounted for 14% of that week’s coverage.

Still, there were enough storylines, including U.S. success, to drive the news narrative last week, most notably the telegenic and hobbled Lindsey Vonn, who won a Gold medal in downhill skiing.

The day after that victory, NBC anchor Brian Williams told his audience about “the Gold rush here in Vancouver as American athletes come on strong.” Correspondent Dawna Friesen, noting that U.S. athletes had captured six medals on February 17, declared: “It’s been called everything from America’s golden day to the Vonn-Couver Olympics. It was a dazzling day of American dominance.”

It’s not that the CBS or ABC news operations ignored the events in Vancouver. Both of them devoted about 11% of their news coverage studied last week to the games. But that accounted for only a fraction—about one-fifth—of NBC’s attention to the topic.

The other top stories of the week attracted almost as much attention as the Olympics, and more if NBC is subtracted from the mix. Last week’s third-biggest story was Afghanistan (8%), which generated more coverage in the internationally oriented online sector (11%) than anywhere else. The February 15-21 level of coverage represented the most for that war since the first week in December when President Obama announced his decision to send 30,000 more U.S. troops to the combat zone.

Last week, how those troops performed in a crucial U.S.-led offensive against the Taliban was the dominant theme.

A story in the February 21 Washington Post laid out the stakes. “Although thousands of Marines and Afghan soldiers remain engaged in a grueling fight against Taliban holdouts concentrated in southern Marja, top commanders and civilian stabilization advisers face an even more daunting task: how to establish basic local governance and security in a place where there are no civil servants, no indigenous policemen and apparently no public buildings,” the Post reported. “How that effort plays out here will amount to the first major test of President Obama’s new counterinsurgency strategy.”

The No. 4 story (7% of the newshole) focused on events likely the shape the outcome of the 2010 elections—and last week, the main development was Evan Bayh’s unexpected decision to retire from his Senate seat.

A story in the February 16 Wall Street Journal summed up the political/media consensus that this was more bad news for beleaguered Democrats.

“Mr. Bayh’s decision, which he chalked up to gridlock and political infighting, gives Republicans an unexpected opportunity to pick up a seat, raising the specter of Democrats losing their Senate majority,” the story noted. “A year ago, such a concept appeared improbable, but now …five Democratic senators have chosen not to run this fall, and in four of those states—Indiana, North Dakota, Illinois and Delaware—their party is struggling.”

The fifth-biggest story, also at 7%, was the deadly small plane attack by software engineer Joseph Stack that left him and one IRS employee dead. Stack, who had a history of problems with the tax agency left behind what was described as an angry online manifesto that began, “Well Mr. Big Brother IRS Man…” Part the coverage examined the issue of how to characterize a crime that was both personal and political.

“Today, officials are struggling with how to define this case,” noted ABC correspondent Pierre Thomas on the February 19 edition of Good Morning America. “Was it an act of terror or an act of vengeance by a deranged man? Stack is described as a classic lone wolf who would have been almost impossible to stop.” 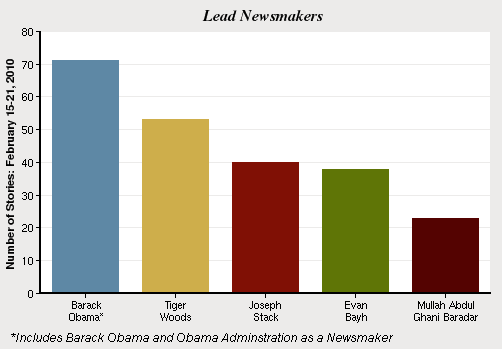 He was followed, at 5%, by Tiger Woods, who emerged from self-imposed silence and rehab to address the public last week.

The No. 3 newsmaker (at 4%) was the suicide plane attacker Joseph Stack. He was followed closely by Evan Bayh (4%), whose retirement remarks included a shot at Congress for “too much narrow ideology and not enough practical problem solving.”