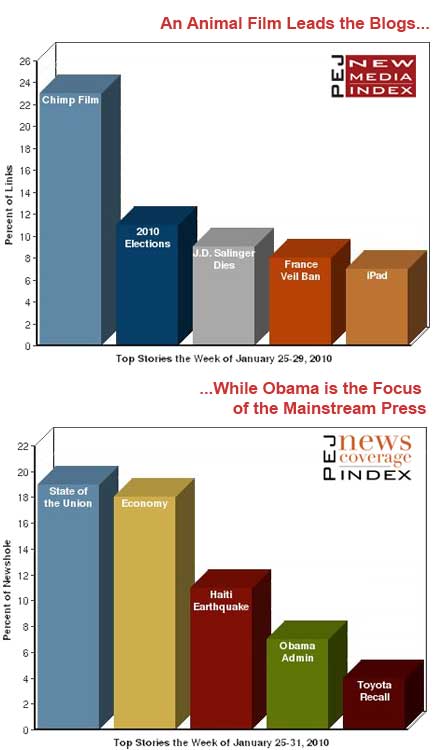 Technology and offbeat science experiments are subjects that frequently draw interest in the world of social media. And after two consecutive weeks of focusing heavily on the tragedy in Haiti, social media returned last week to this familiar territory-even giving it precedence over the State of the Union Address.

The rollout of Apple’s new iPad was the No. 1 topic on Twitter, generating 18% of the news links from January 25-29, according to the Pew Research Center’s Project for Excellence in Journalism.

The iPad was also the fifth-biggest topic on blogs (7% of the links) in a week when the No. 1 story in the blogosphere (23%) was the BBC airing of the first-ever film shot entirely by chimpanzees.

President Obama’s State of the Union Address, on the other hand, which led in the mainstream press last week according to PEJ’s News Coverage Index, carried much less weight in social media. On Twitter it got less than half the attention as the iPad-ranking 5th at just 8%. And the speech did not even make it into the top five stories in the blogosphere.

Apple’s unveiling of the iPad did register as the eighth-largest story in the mainstream press, filling 3% of the week’s newshole from January 25-31.

While both Twitter and blogs gave considerable attention to the iPad, there was a difference in the way they each addressed the subject.

Most of those links on Twitter came early in the week as people tried to uncover early information about the gadget before it was revealed at a press event on Wednesday.

On the blogosphere, however, most of the commentary came after the January 27 unveiling. Bloggers then weighed in with their initial impressions of the machine.

And while the pre-release tone on Twitter mainly displayed fervent anticipation for the device, the tone among bloggers after the release was much more lukewarm. Most took a wait-and-see attitude as to whether the iPad was actually going to be worth the cost.

What brought more enthusiasm, and attention, among bloggers last week was news that the BBC was going to be airing the first-ever film shot entirely by chimpanzees. In the melding of an unusual science experiment with technology, doctoral students in Britain gave a group of chimps living in the Edinburgh Zoo specially designed cameras as an experiment to see how the animals viewed the world. The show, titled "Chimpcam," was broadcast on January 27 (the same day as the iPad release) in England. Most of the online commentary found the endeavor humorous, though a few saw it as a waste of time.

The second biggest story on blogs, with 11% of the links, was a January 24 Washington Post column by President Obama’s campaign manager David Plouffe offering suggestions for Democrats in Congress prior to the upcoming mid-term elections. The passing of noted American author J.D. Salinger at the age of 91 was third at 9%. That was followed (at 8%) by a report about a French parliamentary committee that recommended a partial ban on women wearing Islamic veils in certain public spaces. 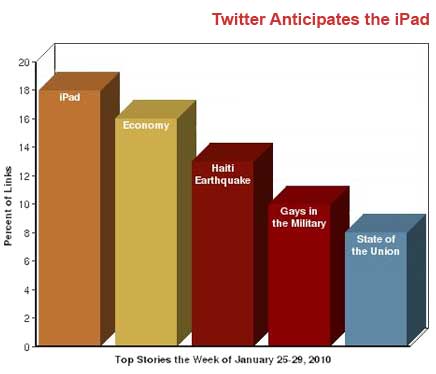 The other top stories on Twitter were all politically-focused. Second, at 16%, were stories about the economy including a CNN poll which found that 3 out of 4 Americans believe that much of the federal stimulus money has been wasted. A combination of stories about the aftermath of the Haiti earthquake ranked third at 13%. Obama’s call to end the ban on gays in the military was fourth at 8% while links to Obama’s entire State of the Union speech were fifth at 8%.

As the week began, anticipation was building for Apple’s January 27 press event to announce its new creation-some kind of Apple tablet. Its specific features, though, and even the product’s name were not yet known.

Twitterers craved advanced knowledge of what was to come. One story linked to by many came from Wired. The January 24 story previewed the unveiling and reported that the tablet was supposedly 10 or 11 inches in size and the hardware resembled that of an iPhone.

As they passed along any information they could find on the device, many also posted their takes, including guesses of what the product would be called.

"Apple event tomorrow," tweeted digiblogshiff. "iPad, islate? Poss Macbook updates? Do I need a bigger Iphone, and will I pay $1000 for it?"*

A January 26 blog entry on CNET News included more rumors about the tablet that had been circulating for months. The name, according to the blog, was probably going to be either the "iPad" or the "iSlate" and the price was likely going to be anywhere from $500 to $2,000.

"The geek in me is very giddy about these Apple tablet rumors," tweeted DCheapChic.

"Suspense is killing me as Apple & Jobs will change the world at 10 AM.," proclaimed

Following the unveiling of the iPad and after some media outlets including Wired were given hands-on access to the device, many in the online community were not impressed, especially in the blogosphere.

"It looks like something half way between an i-phone and a laptop and I am not convinced by it. It looks a bit ridiculous and I question whether there is a market for it at this time," wrote Sarah Scott at The Web We Weave.

"For this type of device to catch on" concluded Scarista, "there will really need to be  . . . the kind of technology that would allow you to roll your touch-screen tablet up and stick it in a pocket."

"So Apple have finally announced [BBC] the details on their world-shattering new product," posted Madhouse Beyond. "And it is… er… an iPod touch that doesn’t fit in your pocket and has a battery that drains three times as fast. Wow."

There were a few people, especially on Twitter, who liked what they saw.

"This is truly an incredible device. It’s like an iPhone, but faster/sweeter," decided Dave Gookin.

"A giant iPhone? Sign me up!" declared Nick B-D.

Most of those bloggers took a lighthearted view of the BBC report about the show featuring footage exclusively shot by chimpanzees.

"If you’ve ever watched a movie and thought, ‘A chimp could make this,’ now you have something to compare it to for verification," joked Robopanda at Gamma Squad.

"It won’t be long before NBC expands the resulting film into a nightly prime time series and considers the head ape as a future host for The Tonight Show," posted Cinema Retro.

A few bloggers, however, felt the entire endeavor was a waste of time and effort.

"This is so stupid-trying to pretend that the chimps did anything besides play with a camera…This was chimps playing with a toy-there wasn’t any actual ‘movie-making’ going on," protested The B.S. Report. "This was worse than when you hand a chimp a paintbrush and promote their ‘artwork.’"

"Ultimately the [news] report sounds like the whole experiment was a total bust," responded Brian Balthazar at Pop Goes the Week. "A bunch of chimps carried around a camera, having no idea what the hell it was. Stay turned to watch the results on television."

On YouTube last week, the most-viewed news videos touched on a wide range of topics, both in tone and in geography.

The top video was a comic report by Italian television host Elena Di Cioccio about her attempt to grab soccer star David Beckham’s genitals. According to reports, Di Cioccio was motivated by having seen Beckham in numerous underwear ads.

The second most-popular video featured the British band Coldplay as they performed as part of the January 22 Hope for Haiti telethon.

Next came a satirical rap video produced by Econstories.tv. "Fear the Boom and Bust" included actors portraying John Maynard Keynes and F. A. Hayek, two of the most prominent 20th century economists, rapping about their different theories regarding the role of government and the free market.

An audiotape obtained by Al Jazeera supposedly of Osama Bin Laden was fourth. On the tape, Bin Laden claims responsibility for the failed attack Christmas day on a plane headed for Detroit.

And No. 5 was an unpredictable moment on French television when game show host Christophe Dechavanne was physically attacked by an angry audience member who claimed that the vaccine for the H1N1 virus was actually a poison. Dechavanne tussled with the attacker before the man was removed and the show resumed with the hosts laughing off the incident.

A prominent Web tracking site Icerocket, which monitors millions of blogs, uses the links to articles embedded on these sites as a proxy for determining what these subjects are. Using this tracking process as a base, PEJ staff compiles the lists of links weekday each day. They capture the top five linked-to stories on each list (25 stories each week), and reads, watches or listens to these posts and conducts a content analysis of their subject matter, just as it does for the mainstream press in its weekly News Coverage Index. It follows the same coding methodology as that of the NCI. This process allows us to compare the New Media commentary, based on the Icerocket list of links, with the commentary in the traditional press.  Note: When the NMI was launched in January 2009, another web-tracking site Technorati was similarly monitoring blogs and social media. PEJ originally captured both Technorati’s and Icerocket’s daily aggregation. In recent months, though, this component of Technorati’s site has been down with no indication of when it might resume.