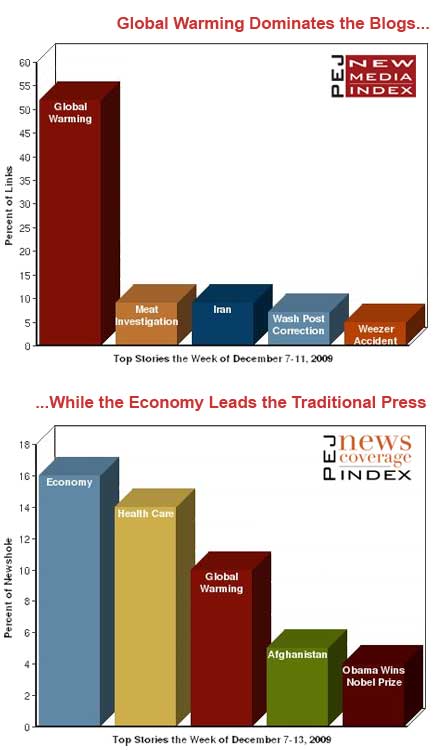 Global warming has of late been a very hot topic in social media, and last week it was hotter than ever. Much of the added fuel came from climate change believers who engaged in the debate that had been dominated by skeptics.

From December 7-11, more than half (52%) of the news links in blogs were about global warming, according to the New Media Index from the Pew Research Center’s Project for Excellence in Journalism. That represents the most attention to the subject in any given week this year, and marks the third week in a row that global warming has been among the top four subjects in blogs. It was also prominent on Twitter last week, registering as the No. 3 topic with 14% of the news links.

And while mainstream media has generally covered the issue less than social media, global warming filled 10% of its newshole last week, the highest level of coverage since PEJ’s News Coverage Index began tracking it in January 2007.

Over the past few weeks, the social media commentary has been led by climate change skeptics focused on "Climate-gate"-the hacked emails from a British research unit that raised the possibility of climate data manipulation. Skeptics claimed that the actions undermined the science behind global warming and de-legitimized the Copenhagen summit which began December 7. Last week, many of the online commentators continued to voice doubts about global warming fueled by Washington Post op-eds by prominent conservatives and global warming skeptics, George Will and Sarah Palin.

But there was a noticeable change in the social media debate last week as those who believe in the dangers of global warming increased their presence. These supporters criticized the emphasis placed on "Climate-gate" and applauded the Environmental Protection Agency’s decision to regulate greenhouse gases.

Following global warming, the rest of the leading stories in the blogosphere represented a wide range of topics.

An investigative report by USA Today revealing that the government’s standards for meat in school lunches were lower than those of most fast-food chain restaurants finished second with 9% of the links.

The subject of Iran finished third (at 9%), triggered by multiple stories including a Fox News report that Iranian President Mahmoud Ahmadinejad accused the United States of trying to thwart the return of Mahdi, the Imam believed by Muslims to be the savior. Also in the mix was a BBC article about clashes between police forces and anti-government protestors in Tehran.

The fourth biggest storyline (at 7%) was a correction in the Washington Post which some found humorous. The paper acknowledged it had falsely identified a song from the rap group Public Enemy as "9/11 is a joke" instead of the actual title, "911 is a joke." And a story about a bus crash involving the lead singer of the rock band Weezer finished fifth at 5%.

On Twitter last week, where technology stories usually dominate, Tiger Woods won the No. 1 spot with 18% of the news links.

Reports about the December 7 call to 911 from Woods’ house and the ambulance that then took a woman (later identified as Woods’ mother-in-law Barbro Holmberg) to the hospital gained attention early in the week. 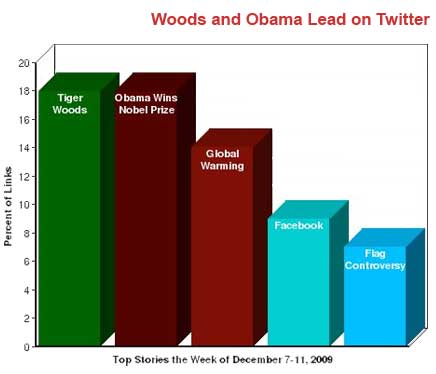 Receiving almost the same amount of attention was President Obama’s Nobel Peace Prize acceptance speech (2nd at 18%). Global warming was third at 14%, followed by a story about the privacy settings for Facebook at 9%. And a about a battle won by a 90-year-old Virginia veteran to keep an American flag displayed in his yard finished fifth, at 7%.

Skeptics of man-made global warming continued to focus on the "Climate-gate" scandal as they have the previous few weeks. And they were bolstered by columns from George Will and Sarah Palin questioning global warming science and the motives behind the forthcoming Copenhagen summit.

"The e-mails have popped the credibility bubble of what Roger Pielke Sr. of the University of Colorado, has called ‘the climate oligarchy’" wrote Teófilo de Jesús at Vivificat. "Suddenly I don’t think that I have all the facts, that the sober analysis of competing hypotheses has not taken place, that the global consensus often bandied about is a fallacy – a variation of ad populum argument – and that our nation cannot commit itself to irrevocable courses of actions based on compromised science."

"The climate change…movement has gone way beyond reasonableness," added Too Conservative. "The data scandal and burying of conflicting opinions that has recently come to light show that this is indeed more a cultish lemming movement than any scientific phenomenon…."

But Palin proved to be a lightning rod for some on the other side of the global warming debate, who criticized her op-ed piece and the Washington Post’s decision to publish it.

"I cannot understand how a fringe, ignorant, conspiracy theory imbibing, secessionist is given space in the Washington Post to pen on issues she has no knowledge of, which happen to be the extreme-right wing scandal du jour," responded Larisa Alexandrovna of at-Largely. "Amazing how anti-science advocates like Palin and her ilk suddenly want ‘trustworthy’ science, is it not?"

Some took aim at the Climate-gate controversy itself.

"An oft-repeated criticism of the theory of human influenced global warming researchers is that they use a small set of data to make predictions about a large phenomena," wrote Cangrejero at The Midpoint. "The irony of a movement bent on denying all the work done by many scientists because of a few cherry-picked phrases from 1000 emails between colleagues is not lost on me."

And others applauded the announcement that the EPA was going to regulate greenhouse gases as a threat to human health.

"Finally," exclaimed James Rowen at The Political Environment. "After years of benign neglect and outright opposition from the Bush administration, the Federal government, taking its cues from a conservative Supreme Court, is finally stepping up to regulate carbon dioxide and other greenhouse emissions."

The issue of global warming went beyond the blogs as many Twitter users linked to related articles. Palin’s piece was of particular interest to both those who agreed and disagreed with her.

Supporters of the Copenhagen conference were also interested in a page on the site Creativebits.org that displayed many innovative advertisements from around the world promoting the cause of fighting global warming.

"We can all save the world. exquisite ads to raise awareness," tweeted Valentina Wahyu.

Bloggers also reacted strongly-and more in unison-to the USA Today investigation on USDA rules for meat served in the country’s schools. It found the rules to be less stringent than for meat in fast-food restaurants with, for example, fewer checks for bacteria and dangerous pathogens.

"Apparently, most fast food chains and upscale markets are far more picky about what kind of meats they use than the USDA School Lunch program," wrote Bert Perry at Bike Bubba’s Bits. "So if you wondered whether you were eating ‘strawberry tart without so much rat in it’ in 5th grade, well yes, absolutely."

Some of the commentary took on a more ideological tone, seeing the story as a warning about incompetent government.

"For the past three years the government has been providing meat to school lunch programs that would not meet the quality standards of ANY fast-food chain checked," added Truth Freedom Prosperity. "Can you only imagine what government run healthcare will look like? Why would anyone want the US Government to do anything the private sector can do better?"

And some made a personal connection.

"I’m gonna have to be more vigilant about packing the kid’s lunches..ugh.." quipped Randall Hand at Yeraze’s Domain.

An uncomfortable exchange between White House Press Secretary Robert Gibbs and a reporter was viewed almost three million times last week, making it the most viewed news video on YouTube.

After growing frustrated with her line of questioning, Gibbs told Ryan to "calm down" and compared her to his young son which caused some reporters in the room to groan.

The video, which was posted by the conservative blog Townhall.com, was still the most viewed video more than a week after the event occurred. Greg Hengler, posting on Townhall, wondered if the lack of major coverage of the incident demonstrated media bias.

"It’s time for the ‘imagine if Bush’s’ WH Press Secretary (your choice) would have made this statement to April Ryan, reporter for American Urban Radio? Would the response have sounded like crickets from the MSM and the Left?" he asked.

A prominent Web tracking site Icerocket which, monitors millions of blogs, using the links to articles embedded on these sites as a proxy for determining what these subjects are. Using this tracking process as a base, PEJ staff compiles the lists of links weekday each day.  They capture the top five linked-to stories on each list (50 stories in all each week), and reads, watches or listens to these posts and conducts a content analysis of their subject matter, just as it does for the mainstream press in its weekly News Coverage Index. It follows the same coding methodology as that of the NCI. This process allows us to compare the New Media commentary, based on the Icerocket list of links, with the commentary in the traditional press. Note: When the NMI was launched in January 2009, another web-tracking site Technorati was similarly monitoring blogs and social media. PEJ originally captured both Technorati’s and Icerocket’s daily aggregation. In recent months, though, this component of Technorati’s site has been down with no indication of when it might resume.