Another metric by which we can examine news about Hispanics is to consider who was making the news.  What specific people—and more specifically, what people of Hispanic heritage—drove these news stories? 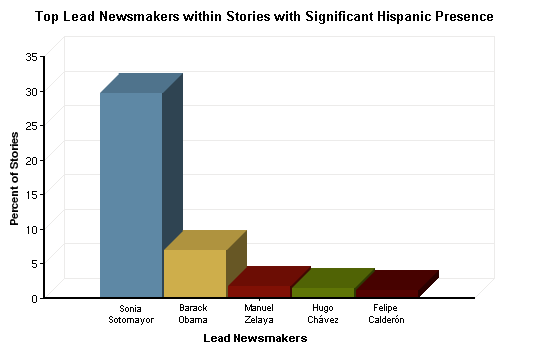 Once again, Sonia Sotomayor was the person most often at the center of coverage.  Within all news coverage containing prominent references to Hispanics, she was the lead newsmaker in 29.7% of these stories.  She also figured prominently in the larger news universe, with her nomination making up 1.5% of the stories in the total NCI.

The next-leading newsmaker among stories containing significant Hispanic references was Barack Obama, at 7.0%.  Most of these stories dealt with foreign affairs, such as his April trip to Mexico or his historic handshake with Hugo Chávez at the April Summit of the Americas.

The only other people to garner even one percent of lead newmaker status in these stories were leaders of Latin American countries that figured prominently in the news from February through August: ousted Honduran president Manuel Zelaya (1.7%), Venezuelan president Hugo Chávez (1.4%), and Mexican president Felipe Calderón (1.1%).

Next: Differences by Media Sector Next Page → ← Prev Page