The Army Base Massacre Dominates the Week

The November 5 assault at the Fort Hood Army post—and questions about the suspected shooter’s background and motives—commanded the media agenda last week, quickly eclipsing other major stories in the news.

For the full week of November 2-8, the attack that killed 13 and left dozens more wounded, allegedly carried out by Maj. Nidal Malik Hasan, accounted for 15% of the newshole, according to the Pew Research Center’s Project for Excellence in Journalism. But in the three days from November 5-8, the saga accounted for more than one-third (34%) of the coverage monitored in PEJ’s News Coverage Index.

Attention to the rampage marked the first time in seven weeks that a subject other than health care, the economy or Afghanistan registered as the No. 1 story in the news. And it became the first breaking news event—as opposed to an ongoing subject—to lead the coverage since the death of Senator Edward Kennedy filled 27% of the newshole from August 24-30.

Given the chaos and carnage of the Fort Hood killings, and the fact that they occurred on a military facility, much of the early coverage was devoted to piecing together the sequence of events and reporting on the victims. But almost immediately, another major narrative began to emerge—the question of whether the accused killer, as Fox News’ Bill O’Reilly put it, was “a Muslim terrorist or just a guy who flipped out?”

By week’s end, as investigators and the media began digging more deeply into Hasan’s history, there were no definitive answers. But that didn’t keep some of the ideological talk hosts from staking out early positions on an issue with the power to polarize and stir passions.

The second-biggest story, at 9% of the newshole was the economic crisis, with coverage fueled by news that the unemployment rate had jumped to 10.2%, the highest level of joblessness since 1983.

Afghanistan finished at No. 3, filling 8% of the newshole with the news that Abdullah Abdullah—the candidate slated to face President Hamid Karzai in a runoff election pushed by U.S. officials—had dropped out of the race, leaving Karzai as the winner.

The No. 4 subject (also at 8%) was the health care debate, a story punctuated by a late-in-the-week event, the narrow passage of a health care bill in the House of Representatives on November 7.

The fifth biggest story (5%) was the New Jersey gubernatorial election in which the Democratic incumbent was defeated in what was widely portrayed as a solid boost for GOP morale. Another election in which the Virginia State House was taken over by a Republican filled 4% of the newshole. And a high-profile race that saw a Democrat gain a GOP Congressional seat in upstate New York accounted for 3% of the newshole. So the three elections last week most closely watched by journalists and pundits looking for signs of a referendum on President Obama combined for about 12% of all the coverage studied.


Fort Hood and the “Why” Question The Army base attack was primarily a television story.  For the week, it generated the most coverage on cable news (25% of the airtime studied) and network news (22%). And in the more narrowly telescoped November 5-November 8 time period between the shooting and the end of the week, it accounted for more than half the coverage studied in both of those sectors.

The media quickly jumped on many of the basic elements of the tragedy—the “who, what, when, and where” questions. (Early reports that the suspect had died in the attack were 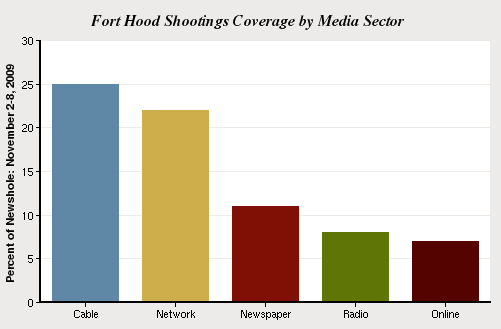 quickly corrected late on the day of the assault.)

Figuring out the “why” proved to be more difficult and controversial last week. But the shooter’s religion quickly became a crucial element, a subject given more weight by reports in the press that Hasan shouted “Allahu Akbar” (“God is Great”) just before he began shooting.

On the November 6 edition of the CBS Early Show, anchor Harry Smith noted that “we’re starting to get a little bit of a clearer picture of Major Nidal Malik Hasan” as he discussed a video from a convenience store surveillance camera that showed Hasan dressed in “Muslim garb,” including a prayer cap.

“He was quite devout and we’re starting to hear some reports from some people…that some of his views were not necessarily in line with many of the people he served with,” added Smith.

That same day, a New York Times reported on another faith-related aspect to the story. Hasan “began having second thoughts about a military career a few years ago after other soldiers harassed him for being a Muslim, he told relatives in Virginia. He had also more recently expressed deep concerns about being sent to Iraq or Afghanistan,” the story noted. “The Federal Bureau of Investigation earlier became aware of Internet postings by a man calling himself Nidal Hasan, a law enforcement official said. The postings discussed suicide bombings favorably, but the investigators were not clear whether the writer was Major Hasan.”

Amid the growing questions about motive, some cable news shows began hammering away at the Muslim issue, albeit from different, and perhaps predictable, perspectives—quickly turning the shootings into a kind of wedge issue.

On Bill O’Reilly’s program on Fox, conservative analyst Bernard Goldberg accused some of the media of having a “politically correct virus” by focusing more on the question of whether Hasan was suffering from post traumatic stress disorder than on his religion.

“Here’s a gunman who you rightly say is either a Muslim terrorist or a crazy person.” Goldberg said. “And there’s reason to believe…that religion played more than a passing part in all of this.”

On MSNBC, liberal host Rachel Maddow interviewed Suhail Khan, a fellow for Christian-Muslim Understanding at the Institute for Global Engagement, who accused some in the media of fomenting anti-Islamic sentiment and “exploiting a tragedy for a very ugly and bigoted means.”

“You have fifteen thousand to twenty thousand Muslim Americans who are proudly serving in our Armed Forces,” he added. “Unfortunately there are people….that are questioning their loyalty just strictly because of their faith.”

By the end of the week, news accounts were reporting on an expanding investigation into Hasan and his connections as questions of motive remained unresolved.

The November 8 Washington Post noted that investigators “spent the weekend poring over evidence they seized from the apartment of the alleged shooter, Army Maj. Nidal M. Hasan, including his computer and multiple e-mail accounts he may have controlled… All evidence suggests that Hasan acted alone, said a spokesman for the Army’s Criminal Investigative Division and investigators have released no information that would link the case to a terrorist group Texas Gov. Rick Perry (R) told reporters at a news conference Saturday that the shooting was an ‘isolated’ incident, and President Obama, after be ing briefed by FBI Director Robert S. Mueller III, cautioned that the public should not rush to judgment about the case.”

Last week, a handful of closely monitored elections were viewed as possible harbingers of the country’s mood going into the 2010 election cycle. The one that got the most attention (the No. 5 story at 5%) was the New Jersey governor race in which Democratic incumbent Jon Corzine was defeated by GOP challenger Chris Christie in a state that Obama easily carried in 2008. The No. 7 story (4%) was the voting in Virginia where Republican Bob McDonnell defeated Democrat Creigh Deeds to become governor. And the eighth biggest story (3%) was the race in New York’s 23 Congressional District where Democrat Bill Owens defeated Republican Doug Hoffman after conservative activists helped drive moderate GOP candidate Dede Scozzafava from the race.

After the balloting, much of the coverage focused on the spin wars between Republicans and Democrats over the meaning of the results. And commentators on both sides of the ideological spectrum weighed in.

In the Wall Street Journal, Karl Rove wrote that “Tuesday’s results were the first sign that voters are revolting against runaway spending and government expansion. But Democrat likely ain’t seen nothin’ yet if they try to ram through health-care reform.”

Conversely, columnist E.J. Dionne declared that, “The night’s biggest loser was the national conservative political machine…The Beltway Right shoved aside local Republicans in an upstate New York congressional race, imposed their own candidate who didn’t even live in the district, and went down in a heap.”

If there was a general consensus that emerged in the coverage, it was reflected in a Reuters story citing political analysts who said “the voting should ring some alarm bells for Democrats looking ahead to the 2010 congressional elections.”

The second-biggest story from November 2-8 was the economic crisis, which filled 9% of the newshole, down from 12% the previous week. It was the top story in one media sector, newspapers, where it filled 13% of the front page coverage. The key storyline, which accounted for about 40% of the economic coverage, was jobs issue, driven by news that the unemployment rate had passed the symbolically significant 10% benchmark.

The conflict in Afghanistan was the No. 3 story, at 8% of the newshole last week, down from 13% the previous week. It was also the top story in one media sector, online, where it accounted for 13% of the coverage studied. Last week, the focus was on internal Afghan politics as the planned runoff election was cancelled in light of Abdullah Abdullah’s withdrawal.

The health care debate was the fourth-biggest story, also at 8%—half the previous week’s total of 16%. Part of that drop was due to the flood-the-zone coverage of the Fort Hood shooting and part of it reflects the fact that the biggest development—the House passage of a health care measure after heavy lobbying by Obama—occurred very late in the week. 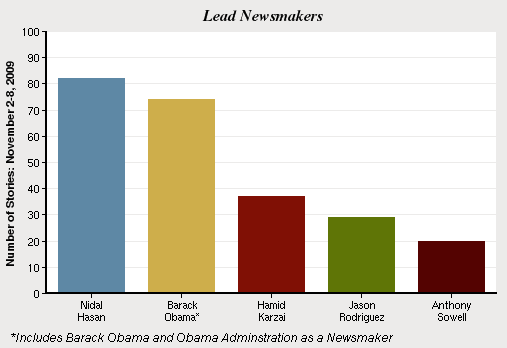 In another indication of the extensive coverage of the Fort Hoot rampage, Nidal Malik Hasan was the top newsmaker last week. He appeared as a lead newsmaker in 6% of the stories from November 2-8, edging out Obama, who was at 5%. Hasan became only the fourth person—along with Ted Kennedy, Sonia Sotomayor and Michael Jackson—to generate more media attention than the President since his inauguration in January.

The No. 3 newsmaker (3%) was Afghan President Hamid Karzai, who was officially declared the winner of the August 20 election last week. Next, at 2%, was Jason Rodriquez, the suspect in an Orlando shooting spree that left one man dead. He was followed at No. 5 by Anthony Sowell, (1%) the man accused of murder after bodies were unearthed at his Cleveland home.