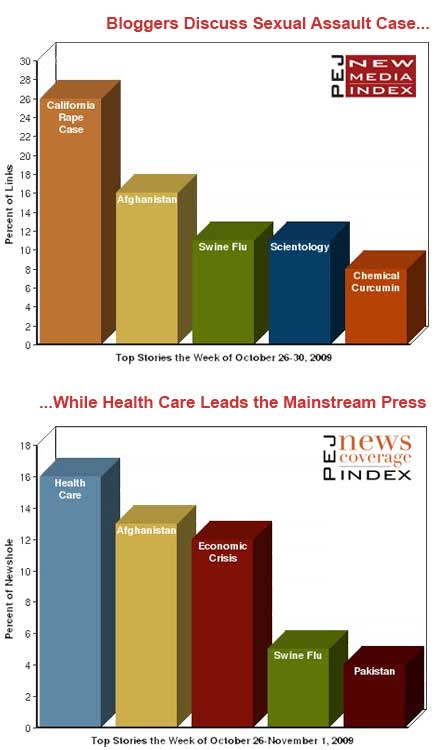 Reports that as many as 20 people may have been involved in or observed a gang rape of a 15-year-old girl outside a high school homecoming dance in Richmond, California, touched a nerve in the blogosphere last week, provoking a torrent of outrage and concern.

For the week of October 26-30, more than a quarter (26%) of the links to news-related stories from blogs were about the shocking case, according to the New Media Index from the Pew Research Center’s Project for Excellence in Journalism. Various media outlets have reported that the incident may have lasted for as long as two hours and at least seven suspects have been arrested, most of them teenagers.

Many online commentators blamed the bystanders to the crime as much as those who actively participated. And for many the incident raised larger questions about American society and culture. The case generated much more attention online than it did in the mainstream press, where it filled only 1% of last week’s newshole in PEJ’s News Coverage Index.

The second-largest story in the blogosphere was the war in Afghanistan, with 16% of the week’s links. Most of that attention was generated by reports of the resignation of Foreign Service officer Matthew Hoh, who left in protest of the U.S. presence there. As President Obama continues to consider military options, many bloggers agreed with Hoh that it was time to end the American combat role there.

This is the third time this year that Afghanistan has been among the top two stories in the NMI. Each time, the dominant reaction in the blogosphere has been different, suggesting that U.S. involvement in the war fuels strong passion on both sides of the divide.

The week of August 31-September 4, an article by conservative columnist George Will spurred strong commentary from bloggers both for and against U.S. involvement. Then two weeks later, during the week of September 21-25, bloggers endorsing a U.S. troop surge drove the online commentary (which followed a report about NATO commander Stanley McChrystal’s desire for more Americans on the ground). Now, most recently it is those opposing the war that have been the most vocal online.

The No. 3 story, with 11% of the links, was the declaration by Obama that the spread of the H1N1 virus, commonly known as the "swine flu," has become a national emergency. The No. 4 story, also at 11%, was a verdict by a French court that found six members of the Church of Scientology guilty of organized fraud and fined each as much as 400,000 euros.

And a BBC report about scientists who discovered that the chemical curcumin, found in the bright yellow curry spice turmeric, may have the power to kill cancer cells finished fifth at 8%. This continues a trend in the New Media Index in which bloggers often focus significant attention on rather bizarre scientific discoveries such as a meat-eating plant and a chemical found in blue M&M’s that could help reduce spine injury damage.

The top stories on Twitter departed from recent weeks. Most were about either news events or public policy issues rather than more narrowly focused technology topics.

The most linked-to news story was a CNN report about alleged criminals who made a comical attempt at camouflage. Two Iowa men accused of burglary tried to conceal their faces using permanent black marker. That article, which included mug shots of the men with the marker still on their faces, made up 14% of the news links from Twitter according to the tracking site Tweetmeme. 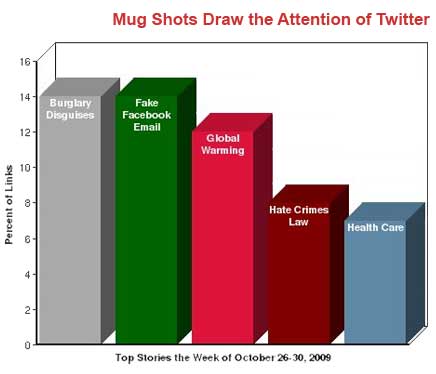 A warning about a fake Facebook email that included a Trojan horse, a malicious software program disguised as a useful one, was the second-largest story on Twitter, also with 14% of the links. Third, at 12%, was an interview by the British newspaper The Times with British climate chief Lord Stern who suggested people stop eating meat in order to help fight global warming.

The news that President Obama signed into law a hate crimes bill that made it a federal crime to assault an individual because of their sexual orientation or gender identity was the fourth story at 8%. And several stories about health care made up the fifth biggest topic, led by a Fox News report claiming that the so-called "death panel" related to end-of-life counseling was still in the House version of the reform legislation.

Anger at the High School Assault

The news of the alleged California gang rape triggered in the blogosphere an outpouring of visceral anger mixed in with broader concerns about a culture that could spawn such a crime.

"How could such a thing happen?" asked bsmith101. "What is going on in the minds of our young people that they could get caught up in such a thing…and then become party to it by standing around and doing nothing? Everyone of those kids should be pulled into court…and facing some type of charges."*

"When I heard this story, I was sick to my stomach. I literally couldn’t believe what I was hearing," admitted landorski. "The fact that a group of men watched and were entertained-laughing and taking pictures-by a woman being repeatedly raped and beaten at their feet is outrageous…Why was their instinct to watch and enjoy and not call the police or intervene? Were they afraid their masculinity would be in question if they did? Did they not view the attack as a crime?"

"This disgusting crime reveals many sicknesses in our society," wrote Susan at 5 Minutes for Mom. "Can you say DESENSITIZED??? The teenagers who watched this crime are obviously so desensitized to brutality and have such little regard for human life that they could watch a young girl be beaten and sexually assaulted for over 2 hours. That is insane!!!"

Among the anger and confusion, several bloggers expressed compassion for the young victim and encouraged people to contribute to a fund set up by the high school to help her.

"I strongly urge you to donate if you can," encouraged Cara at The Curvature. "And if you can’t, difficult though it might be to find something to say, and inadequate as it may feel, sending a short note will only cost you a stamp and a few minutes of your time. Please do so, and pass along the information."

The resignation of Matthew Hoh in protest of the war in Afghanistan spurred a number of bloggers to call for the U.S. to withdraw and place blame on Obama directly.

"Why are we still there?" asked R Bentley at Conservative for Change. "It is time to come home and stop policing the world…We are causing even more problems by staying over there, and when our President is hesitating on whether he should give the troops what they need, it is probably time to just come home. The war is won…it is over, and we are just pouring fuel on the fire."

"If we’re not there to win it, we’re sure to lose it," declared Jerry Fuhrman at Blog From On High. "Mr. Hoh is perfectly justified in having lost confidence. Because Obama freely admits that he has no purpose. Or strategy…If we no longer have a good reason for being there, get out now. Not another brave American life lost. Now."

"Mr. President, you have failed to give that young man a reason for being in Afghanistan; failed to give us all what your sense of direction is for the Afghanistan war," stated tessler at Progressive Think. "This has become your war now…You are to blame for appearing so weak willed, so spineless and so utterly unconcerned about the war on terror, that war has now lost its focus."

Two of the top five most viewed news videos on YouTube last week were of a child internet sensation who has generated worldwide attention. Giuliano Stroe, a 5-year-old Romanian boy who lives with his family in Italy, recently entered the Guinness Book of Records. His feat was to perform the fastest 10 meter hand walk with a weight ball between his legs.

The most popular video, viewed more than 5 million times, shows Stroe performing a number of remarkable athletic feats with his father coaching the youngster in the background.

Stroe’s performances also claimed the fifth most popular video: an ABC report about the boy with some of the same footage from the first video and commentary from two ABC reporters.