A vote by a key Senate committee and the role of one of the Senate’s few swing voters pushed the health care debate to the top of the news agenda last week.

For the week of October 12-18, the health care battle accounted for 21% of the newshole studied, according to the Pew Research Center’s Project for Excellence in Journalism. That marks the highest level of coverage since the week of September 7-13, when Barack Obama delivered a prime-time speech on health care and a formerly obscure Congressman named Joe Wilson made headlines by shouting “you lie” at the President.

Last week, the catalyst for much of that coverage was a 14-to-9 vote in the Senate Finance Committee to approve a bill crafted by chairman Senator Max Baucus—a milestone in a legislative process that had plodded along for weeks. A key character in that story was the lone Republican who broke ranks to vote with the Democratic majority. Maine Senator Olympia Snowe—who also cast a rare GOP vote for Obama’s stimulus package—found herself back in the headlines, generally portrayed in the media narrative as a savvy power broker.

In a week during which the Dow Jones surged over the 10,000 mark, the economy was the No. 2 topic (at 12% of the coverage studied). But the story with the real momentum at week’s end was the bizarre saga of Falcon Heene, a.k.a. “balloon boy.” What started as a made-for-cable white-knuckle event—live October 15 coverage of a free floating balloon thought to be carrying the helpless six-year-old—ended with law enforcement officials vowing to press charges against his family, with the bizarre interlude of watching the boy vomit on two morning network TV shows.  For the full week, the story filled 8% of the newshole. But it was the No. 1 topic (19% of the newshole) in the period from October 15-18.

The No. 4 story was the conflict in Afghanistan, which dropped to 7% of the newshole after registering as the top story (at 20%) the week before. Still, this marks the seventh consecutive week that a war that for so long received minimal coverage was among the top five stories.

The No. 5 story involved Afghanistan’s neighbor and the other principal in the “Af-Pak” crisis that is one of Obama’s top global challenges. Pakistan accounted for 4% of the week’s coverage after a series of deadly attacks by the Taliban and a new government offensive against the militant group.

From October 12-18, the battle over health care legislation was the top story in all five media sectors studied, generating the most coverage (29%) on cable news. (The last time the same topic led all five media sectors, it was the health care debate the week of September 7-13.) And while the biggest newsmaker was the October 13 vote by the Senate Finance Committee, the narrative did not begin or end there. 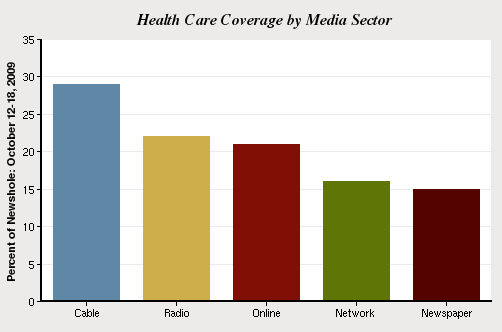 One newsworthy event was the release of a report on the eve of that committee vote that was widely viewed as an insurance industry effort to undermine new legislation.

“After months of collaboration on President Barack Obama’s attempt to overhaul the nation’s health-care system, the insurance industry plans to strike out today against the effort with a report warning that the typical family premium in 2019 could cost $4,000 more than projected under current law,” the Washington Post reported. “The critique, coming one day before a critical Senate committee vote on the legislation, sparked a sharp response from the Obama administration. It also signaled an end to the fragile detente between two central players in this year’s health-reform drama.”

Much of the media coverage of this controversial report didn’t exactly vet its claims, but treated it largely as a political skirmish pitting the Obama Administration against the insurance industry.

The committee deliberations themselves quickly put the spotlight on a crucial Republican legislator. A New York Times blog tracking the vote marked the time at 12:56 p.m. when Olympia Snow cast her lot, at least for the moment, with the Democrats.

“So Senator Snowe takes the leap, becoming almost certainly the only Republican, at least on this committee, to support the Democratic bill,” the Times noted. “But she cautions: ‘My vote today is my vote today, it doesn’t forecast what my vote would be tomorrow…’ Mr. Baucus is thrilled and tells her that her words will be ‘long remembered,’ perhaps a deliberate summoning of the Gettysburg Address.”

The next morning, a report on the CBS Early Show also focused on the Maine senator, declaring that, “For the first time, Democrats can claim a smidge of bipartisan support and that’s because of one yes vote from one rebel Republican who’s now sitting in the catbird seat.” The caption accompanying the story read simply: “Is Olympia Snowe the most powerful woman in D.C.?”

Still, as many media accounts noted last week, the Senate Finance Committee vote is but one step in a long and complicated process with an uncertain outcome. On October 14, a story on the PBS NewsHour detailed those complexities.

“Senate leaders began the grueling task today of merging health care reform bills from two committees,” it reported. “The final product will blend of the Finance Committee version, which passed yesterday with just one Republican vote, with a version passed earlier this year by the Senate Health Committee. And whatever the Senate compromise is, it still must be reconciled with a more liberal version of a health care overhaul being worked on in the House.” At the same time, the NewsHour reported on a push by liberal groups and labor unions to re-open the battle for the “public option” that was not in the Senate Finance bill.

The saga of the boy named Falcon Heene began as a cable news moment and it generated by far the most coverage in that sector (16% of airtime studied). The story had its share of plot twists. The first one was the audible sigh of relief from viewers when it was discovered that the boy was not trapped inside the helium-filled balloon that finally fell to earth in a Colorado field.

Given the fascination with the story, some of the media narrative looked at the role of the press itself.  On October 16, Washington Post (and CNN) media critic Howard Kurtz wrote that the cable networks could not be blamed for the live coverage since “the authorities, and the media, believed they had a credible report that the kid had climbed aboard this weird balloon rocket that his family had constructed…It seemed to be a life-and-death drama as the balloon was buffeted by the winds. I was in two different offices during that hour, and in both places people were gathered around television sets, slack-jawed, transfixed.”

On Ed Schultz’s liberal radio talk show however, the host was upbraided by guest Lizz Winstead (a co-creator of the “Daily Show”) for his interest in the subject.

“Stop talking about these box balloon people,” she asserted. “What are you doing? This is not a story for you. And the only reason you should be talking about a balloon floating across America for two hours is if the TARP money that we’ve lost is in it. Ed, seriously…get a grip!”

As for the story itself, the suspicion that it might have been a bizarre hoax began to quickly surface and built as more became known about the Heene family.  The little boy himself raised some early suspicions during an October 15 CNN interview when he told Wolf Blitzer, that “you guys,” meaning his parents, “said…we did this for the show.”

“Anderson, this is a family that has their own YouTube station, that’s done two reality shows [including] “Wife Swap” where cameras are in the home for large periods of time filming the children. Apparently this father has tried to sell other reality shows unsuccessfully so you have to wonder if this is a stunt,” she said.

By the weekend, those suspicions appeared to be validated.

“Deputies searched the home of a couple caught up in Colorado’s ‘balloon boy’ saga Saturday night after the sheriff said he was pursuing criminal charges in a case that at first sparked fear for the child, then relief he was OK, then suspicions of a hoax,” the Associated Press reported.

News of the state of the economy accounted for 12% of the coverage for the second straight week, although this time it was the online sector (17% of the newshole studied) that devoted the most attention to a topic usually covered most extensively in newspapers. One major storyline last week was the breaking of a key barrier as the Dow edged over the 10,000 mark, up from less than 6,600 in March.

An October 15 story in the Wall Street Journal commented on the milestone while adding that it by no means signaled an end to investor fears. “The Dow Jones Industrial Average surged to 10015.86, passing the symbolic 10000 level much faster than expected and racking up a 53% gain in just seven months,” the story stated. “ Reaction this time was more muted than the first time the Dow closed above the 10000 mark, on March 29, 1999…‘People don’t believe it, they don’t trust it, they are nervous, they are anxious,’ said Andy Brooks, head of stock trading at money-management group T. Rowe Price. ‘Most of us can’t believe the year we have just been through, where you made and lost so much money.’”

The No. 4 story Afghanistan (7%) and the No. 5 story Pakistan (4%) are deeply intertwined with U.S. seeking to neutralize the Taliban and their militant allies in both countries. Last week, the majority of coverage about Afghanistan was—as has been the case recently—focused on the U.S. and the continuing policy assessment underway in the upper echelons of the Obama administration. Conversely, the Pakistan narrative was more closely tied to the violence on the ground in that nation.

Afghanistan generated the most coverage last week in network news (11% of the airtime studied) while Pakistan received the most attention in the online sector (6%). 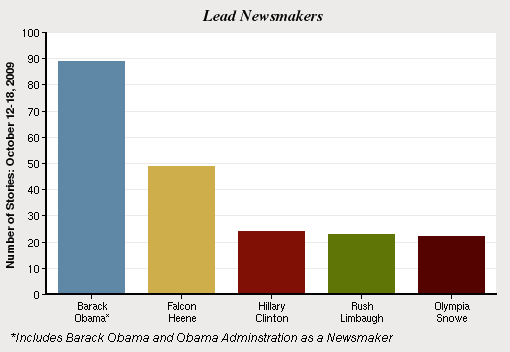 Barack Obama was the central figure in the news last week, showing up as a lead newsmaker in 7% of the stories from October 12-18. (To be “lead newsmaker” in our accounting, a figure must appear in at least 50% of the story). But that’s a relatively modest total for Obama and drop from 11% the previous week. Indeed Falcon Heene, the six-year-old at the center of the balloon story, generated about half as much coverage as the President, appearing as a lead newsmaker in 4% of the week’s stories.

Next, at 2% was Secretary of State Hillary Clinton. Among other things, she made news last week when a Gallup Poll showed her with a higher approval rating (62%) than Obama (56%), her chief (and ultimately successful) competitor for the Democratic presidential nomination in 2008. Clinton was followed closely in the headlines by conservative talker Rush Limbaugh (also at 2%), whose bid to become part owner of the St. Louis Rams football team ended after the radio host generated criticism from some players, the union head, an owner and the league commissioner.

The No. 5 newsmaker of the week, (2%) was Senator Olympia Snowe, the crucial swing vote on the Senate Finance Committee.