A Speech and a Shout Drive Health Care Coverage

The debate over how and if to reform the American health care system re-intensified and dominated the news agenda last week.

That was fueled by a much anticipated Presidential speech and an unanticipated outburst from a South Carolina Congressman.

For the week of September 7-13, the battle over health care reform accounted for 32% of the newshole, according to the Pew Research Center’s Project for Excellence in Journalism. That equals the previous high-water mark in PEJ’s News Coverage Index, which monitors the agenda of the mainstream media. That occurred during the week of August 10-16, when angry town hall confrontations were driving the press narrative.

Last week, the event fueling media attention was President Obama’s September 9 prime time address to Congress. In much of the coverage, the speech was depicted as a crucial attempt to regain momentum after a month when Obama opponents seemed to assume the upper hand in the message/political wars. But as it turned out, Obama had to share the media’s post-speech post-mortems with Republican Congressman Joe Wilson, who heckled the President with the now famous “you lie” shout.

No other story last week came close to matching the attention of the health care battle, but two topics that routinely make the list of top stories did so again. The state of the U.S. economy was No. 2 at 9%, followed closely by the conflict in Afghanistan (also 9%), which continues to generate substantial coverage after a long stretch when it barely registered on the media radar.

A news outlet played a key role in the No. 4 story, terrorism-related issues (5% of the newshole). Much of that coverage featured 9/11 commemorations and on that morning, Americans were jolted by reports of a shooting incident on the Potomac River in Washington. The scare proved to be a false alarm, a Coast Guard exercise portrayed as something more ominous by an initial CNN story that was hustled onto the air.

And controversy over Obama’s plans to give a talk to America’s school kids—with some opponents protesting and some parents keeping children at home—was the fifth-biggest story, at 4%. Much of that opposition dissipated after the speech proved to be non-partisan and non-controversial, leading some news accounts to conclude that the excitement was much ado about pretty much nothing.

From September 7-13, for the seventh time in eight weeks, health care was the No. 1 story. But last week’s coverage spiked dramatically, more than doubling the previous week’s (14%). It was the top story in all five media sectors PEJ examines, getting the most coverage on cable news (46%), network news (35%) and radio (34%).

The single-biggest health care storyline last week was Obama’s speech and Wilson’s outburst, which together accounted for nearly half the coverage of the topic.  Pundits and commentators debated whether the Congre

ssman’s heckling would create a backlash that would work to the President’s advantage. Beyond dispute, however, was the degree to which the episode muscled its way into the news cycle.

“TV news programs, the halls of Congress and the Internet buzzed over what Wilson said to the president in a room thronged with Washington VIPs, including foreign diplomats,” declared a September 10 story on the USA Today web site.

“The outburst heard ‘round the world,” is how anchor Brian Williams characterized it on NBC’s September 10 newscast the day after the speech. “President Obama last night set out to deliver a sharp and direct speech on health care, one final big push for reform. However, it was a sharp and direct comment from a Republican Congressman in the audience that made a lot of news last night,” he added.

Along with drama of the Wilson flap, much of the coverage tried to evaluate the strategic thrust of Obama’s speech as well as its political effectiveness.

A Los Angeles Times post-mortem concluded that, “President Obama’s spirited defense Wednesday night of his broad healthcare goals avoided making concrete commitments on some of the most contentious issues, reflecting a guiding principle of his legislative strategy: to put off the most controversial decisions until the very last moment…At this stage of the process, when neither the House nor the Senate has even begun a floor debate, lining up firmly on one side or the other of the hot-button issues invites gridlock or even defeat.”

A positive assessment came on the September 11 PBS NewsHour with commentators Mark Shields (who leans liberal) and David Brooks (who leans conservative) agreeing that Obama scored political points. Shields said he had finally “established ownership” of the health care issue and effectively argued that “this was a moral issue.” Brooks thought the President had “secured” the support of “the Blue Dogs, the moderate Democrats.” 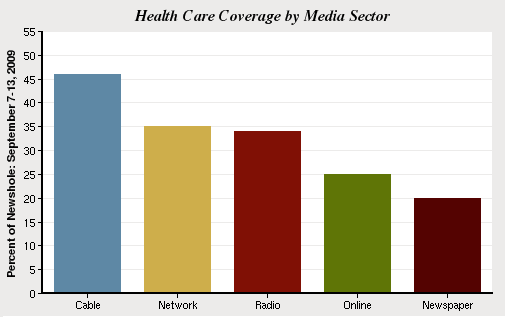 Still, a dominant press theme was that Obama and proponents of a health care measure face daunting challenges on Capitol Hill and in the court of public opinion. (One CNN snap poll making the media rounds found that two-thirds of those who heard the speech agreed with Obama, but that viewing audience skewed Democratic.)

In a September 10 CBS radio news report on the aftermath of the speech correspondent Peter Maer was asked, “What does the President do for an encore?”

“The administration hopes the President has gained some traction on the issue,” he responded, carefully using the word “hopes” rather than “thinks.”

At 9% of the overall newshole from September 7-13, economic coverage was down slightly from the previous week (10%) as it continues to be eclipsed by the health care issue. The topic generated the most coverage (19%) in newspapers last week, but it almost vanished as a television story, accounting for only 4% of the airtime studied on network news and 2% on cable news. The biggest component of the economic crisis coverage was the troubled banking industry, with Treasury Secretary Timothy Geithner telling Congress that the federal government could begin reducing some of its support for the ailing but recovering financial sector.

The third-biggest story was Afghanistan (also at 9%), the same level as the previous week. The key events driving the coverage included the ordering of a partial recount in the presidential elections that have been marred by charges of fraud and the rescue of New York Times reporter Stephen Farrell in a British commando raid that left one commando and an Afghan interpreter dead.

The recent emergence of the war in Afghanistan as a significant story—after registering at just 2% of the newshole in the first six months of 2009—is one of the clear patterns in the News Coverage Index. In the last month, the subject has accounted for 8% of the newshole, ranking as the No. 3 story closely behind the economy (at 10%).

The week’s fourth-biggest story was the U.S. effort against terrorism (5%), a narrative fueled by the eighth anniversary of the 9/11 attacks. That subject got even more attention when CNN broke the news of the Potomac incident that proved to be a training exercise. At that point, some of the coverage focused on whether the cable network or the Coast Guard was more culpable for creating an unnecessary case of the jitters.

The controversy over Obama’s September 8 remarks to returning school children—the No. 5 story at 4%—could perhaps be cited as an example of the media’s proclivity to cover political conflict at almost any level. Once the speech was actually delivered, much of the coverage mirrored the sentiments in this Los Angeles Time account posted on Google News.

“President Obama today urged schoolchildren to rise above their mistakes and challenges to succeed in school, offering himself to students in suburban Washington, D.C., and around the nation as an example of  ‘a goof-off’ who went on to make good,” the story noted. “While the prospect of the president speaking directly to schoolchildren became controversial last week, the speech was decidedly motivational and not political and was praised by some of his critics.” 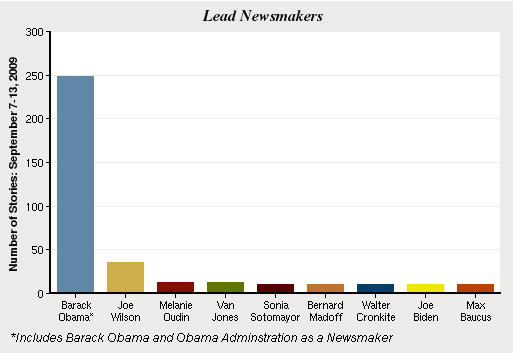 As both the focal point of the school speech flap and more notably, the health care debate, Barack Obama commanded the headlines last week. The President was a lead newsmaker in 19% of the stories from September 7-13, more than doubling his previous week’s total of 8%. (A lead newsmaker is someone featured in at least 50% of a story.)

Indeed, in a summer in which he was occasionally overshadowed as a newsmaker by Sonia Sotomayor, Michael Jackson and Senator Edward Kennedy, last week marked a major increase in the President’s visibility in the media. The only time in the past three months when he generated a similar level of coverage was July 20-26 (at 18%). That week Obama held a major press conference on health care during which he also waded into the racially charged controversy over the Cambridge Police arrest of black scholar Henry Louis Gates.

The week’s No. 2 newsmaker generated attention for being Obama’s chief antagonist. But South Carolina Congressman Joe Wilson was well back, registering as a lead newsmaker in 3% of the stories. He was followed by Van Jones (1%), Obama’s green jobs advisor who resigned after revelations, trumpeted by talk host Glen Beck, about controversial statements and positions he had taken on such subjects as the 9/11 attacks and Republicans. Tied with Jones (also 1%) was Melanie Oudin, the 17-year-old who captivated tennis fans with her performance and personality at the U.S. Open.

Five public figures came next (also at 1%) on the list of newsmakers—Vice-President Joe Biden, the late CBS anchor Walter Cronkite, who was honored last week at a star-studded memorial in New York, and convicted swindler Bernard Madoff, who saw more of his lavish real estate put up for sale last week. Sotomayor, who made her Supreme Court debut, and Senate Finance Committee Chairman Max Baucus, a key player in the health care debate, equaled them in coverage.