Health care reform, an issue that has long simmered on the media back burner, finally exploded into the headlines last week, accounting for one-quarter of the overall coverage. Yet late in the week, the health care debate took a back seat to the arrest of a black professor  that exposed the “third rail” of American society—race.

Together, the two stories accounted for nearly 40% of the coverage from July 20-26. And in both cases, Barack Obama played a key role.

The debate over health care legislation filled 25% of the newshole last week and was the top story in four of the five media sectors, according to the Pew Research Center’s Project for Excellence in Journalism. That marked the most weekly attention to that subject since PEJ began the News Coverage Index in 2007, more than doubling the previous high water mark (11%), which occurred the week of July 13-19, 2009.

Indeed, coverage of the health care issue has traditionally ranged from sparse to non-existent. In 2007 and 2008, it accounted for less than 1% of the overall newshole. But the subject has generated more media scrutiny in recent weeks as it moved squarely into the political arena. Last week, as Obama convened a press conference and his timetable for legislation seemed to be slipping, coverage spiked dramatically—evidence of the media’s proclivity to pay more attention when complex issues are framed by a heated Washington debate.

Another story that emerged to dominate coverage late in the week was fueled by an Obama remark during his July 22 press conference on health care. The July 16 arrest of prominent black scholar Henry Louis Gates in his Cambridge home by a policeman investigating a break-in had already generated attention in the media. But it became a supercharged story when the president, in response to a reporter’s question, declared that he didn’t know “not having been there and not seeing all the facts, what role race played in that,” but that the police had “acted stupidly” in the case.

In an instant, the arrest was not simply a story about the racial climate. It also injected Obama directly into a politically charged controversy at the dangerous intersection of law enforcement and civil rights. The Gates case was the No. 3 story at 12%, just behind the economy. But it built momentum over time and was the top story in the second half of the week, filling 25% of the newshole from July 23-26.

The second-biggest story last week was the economic crisis, which also filled 12% of the newshole—very much in keeping with the level of attention (13%) it has attracted for the past three months. The fourth-biggest story (4%) was the conflict in Afghanistan, with much of the narrative focused on the plight of a U.S. soldier captured by the Taliban.

The fifth-biggest story (also 4%) was the 40-year anniversary of the Apollo 11 mission that put a man on the moon. Much of the coverage seemed to reflect nostalgia for a bygone era when space exploration was both a national priority and a source of collective pride.

One sign that health care has become a more polarizing and political issue can be seen in last week’s coverage patterns. The two media sectors that include the ideological and debate-oriented talk shows devoted the most attention to the story—38% on cable news and 35% on radio.

In addition, a PEJ examination of  storylines in last week’s coverage indicates that the horse race aspect of health care reform—the politics and strategy behind the legislative fight—was the overwhelmingly dominant theme. 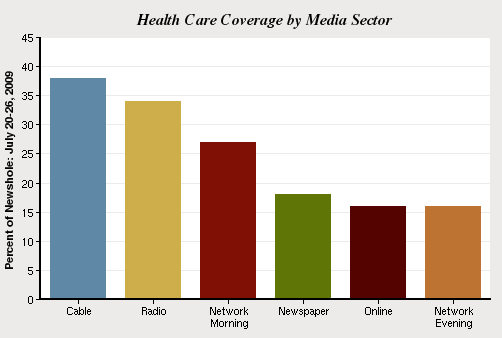 “The charged battle to overhaul health care intensified Monday as President Obama accused GOP critics of putting politics ahead of policy,” said a July 20 story on CNN.com. “In turn, a top Republican said Obama was ramming through an ill-conceived plan that will undermine the country’s economic future. The latest rhetorical volleys were traded as Democrats struggled to regain much-needed political momentum on the high-priority issue before the August congressional recess.”

A good chunk of the coverage, particularly in the talk-oriented media, portrayed the health care battle as a philosophical donnybrook between the forces of big government and big business.

“This is an ideological fight for the country,” declared liberal talk host Ed Schultz on his July 21 radio show. “This is the top two percent influencing the big medical, lining the pockets of the conservative Democrats.’

That night on the Fox News Channel, right-leaning host Bill O’Reilly asserted that “President Obama will try to save his health care vision with a prime-time press conference. He will not succeed. Americans understand the essential force of this country is freedom, not big government micromanaging what we can and cannot do.”

On the July 23 CBS “Early Show,” Louisiana Republican Governor Bobby Jindal declared that the bill from House Democrats “increases the deficit…increases taxes on employers [and] most fundamentally, it’s creating this government-run health care plan. My concern…is they drive out the competition and you have government bureaucrats deciding how much health care we can get.”

Jindal was followed by top Obama adviser David Axelrod, who countered that, “Mr. Jindal says ‘well the government shouldn’t interfere in the market.’ The bottom line right now is everyone is at the mercy of the insurance industry and this would reform the system and put consumers in control.”

Explaining the complicated state of health care coverage, as well as the details of various ideas to reform it, can be a very daunting task for the media. Monitoring the spin wars between the two sides is far easier and helps explain why the subject has finally climbed to the top of the news agenda.

The two sectors that devoted the most coverage to the flap over the arrest of “Skip” Gates were cable news (19%) and network news (15%). And perhaps that’s fitting for a story that owes much of its prominence to a televised press conference.

When Obama was asked, as the very end of last week’s press event, what the Gates arrest said “about race relations in America,” he acknowledged that Gates was “a friend” and “I don’t know all the facts.” But he triggered an uproar by adding that “the Cambridge Police acted stupidly in arresting somebody when there was already proof that they were in their own home.”

The Cambridge police responded with a staunch defense of the officer in question, Sgt. James Crowley, with calls arising for the President to apologize to the law enforcement community.

“President Obama’s comments about the arrest of prominent Harvard University professor Henry Louis Gates has added fuel to the story that has dominated national headlines and stirred discussion over race in America,” said a story on the ABC News web site. And, as the piece noted, it “certainly has moved the focus of attention from health care to the Gates controversy.”

Some coverage examined the broader issues that emerged from the incident. A July 24 New York Times article cited a view among some that “what happened to Professor Gates was a common, if unacknowledged, reality for many people of color…. But more deeply, many said that the incident was a disappointing reminder that for all the racial progress the country seemed to have made with the election of President Obama, little had changed in the everyday lives of most people in terms of race relations.”

But much of the narrative pivoted to focus on Obama’s remarks and their political consequences.

A panel discussion on Sean Hannity’s July 24 Fox program offered a variety of views. “The charges [against Gates] were dropped,” declared a commentator who defended the president. But another contended that Obama should have declined comment: “He should have said [Professor] Gates is my friend, I do not know the details. Next  question.”

Guest hosting for Keith Olbermann on MSNBC, Richard Wolffe opined that “the president’s critics are doing all they can to prevent the controversy from going away. From Rush Limbaugh, two days of glee. He’s been caricaturing the president as an angry black man…”

By week’s end, Obama amended his earlier remarks in an attempt to douse the raging controversy. “This has been ratcheting up, and I obviously helped to contribute ratcheting it up," he acknowledged in a statement. "I want to make clear that in my choice of words, I think I unfortunately gave an impression that I was maligning the Cambridge Police Department or Sgt. Crowley specifically. And I could’ve calibrated those words differently."

A July 25 Associated Press story tried to put Obama’s modified mea culpa in context. “Knocked off stride by a racial uproar he helped stoke, President Barack Obama hastened Friday to tamp down the controversy,” the article stated. “He personally telephoned both Gates and Sgt. James Crowley, hoping to end the rancorous back-and-forth over what had transpired and what Obama had said about it.”

If the administration had hoped to keep health care reform at the forefront of the national conversation, it was Gates-gate that was commanding the headlines at the end of the week.

The second-biggest story from July 20-26 was the economic crisis, which at 12% of the newshole, was slightly down from 13% the previous week. (Once again, that subject was the lead story in the newspaper sector, accounting for 20% of the front-page coverage.) The top two storylines were the financial sector and the impact of the crisis on state and local governments. The big news in the banking world was a report projecting the government bailout could potentially cost as much as $24 trillion. Coverage of how states were handling the crisis included a video of California Gov. Arnold Schwarzenegger brandishing a knife as a symbol of budget cuts.

The No. 4 story last week was the fighting in Afghanistan, with much of the focus on Bowe Bergdahl, the captured U.S. soldier who was displayed and featured in a Taliban video. The anniversary of Apollo 11 came next at 4%.  The almost wistful tone of the coverage was captured in this July 21 story in the San Jose Mercury News.

“While America paused to reminisce Monday about Neil Armstrong and Buzz Aldrin’s first moon landing 40 years ago, a group of space veterans used unusually blunt language to express frustration at a nation that appears to have lost its exploratory compass in space,” the story stated. “Seven Apollo veterans…told reporters that they have gone from a rock-solid faith that Americans would land on Mars by the end of the 20th century to dismay at a nation that appears to lack the spirit of exploration that powered the moon effort in the 1960s.” 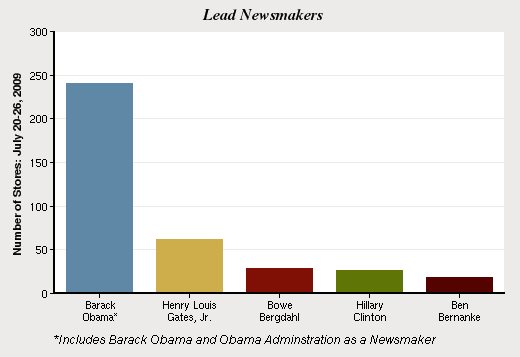 After a series of weeks in which he was supplanted as a top newsmaker by Supreme Court nominee Sonia Sotomayor and pop icon Michael Jackson, Barack Obama re-emerged in the headlines last week. As the figure at the center of both the health care and Gates controversies, he was a lead newsmaker in 18% of the stories from July 20-26.  For his part, Gates was the week’s No. 2 newsmaker at 5%.

Next (at 2%) came captured U.S. soldier Bowe Bergdahl, followed by Secretary of State Hillary Clinton (also 2%), who traded unflattering remarks with the government of North Korea. The fifth-biggest newsmaker, at 1% was Federal Reserve Chairman Ben Bernanke, who testified before Congress about the administration’s plans to reform the financial sector.