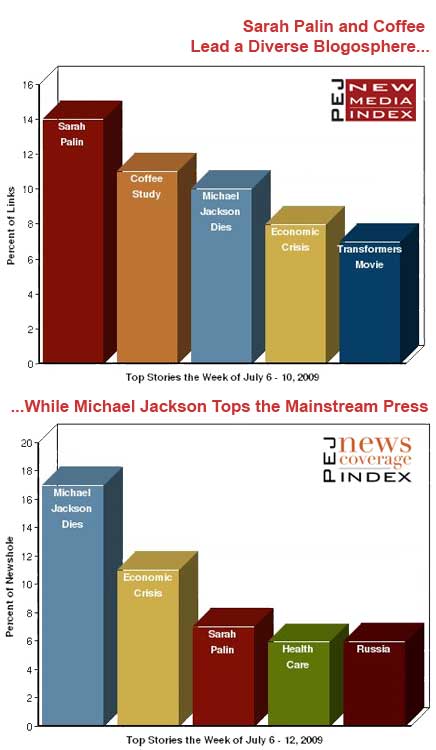 Depending on where you went in the world of social media last week, you would have been seen a dramatically different news agenda. The mix of news on blogs, Twitter, and YouTube varied greatly according to the New Media Index by the Pew Research Center’s Project for Excellence in Journalism.

On Twitter, the on-going protests in Iran continued to dominate, commanding 72% of the news-related links. Last week was the fourth week in a row, as measured by the tracking service Tweetmeme, where Twitter links have overwhelmingly focused on Iranian developments. Links related to Michael Jackson’s memorial, on the other hand, made up only 1% of the links and there was not a single Palin-related story in the list.

On YouTube, another story reigned. It was a week overwhelmingly dedicated to the King of Pop. Twenty-two out of the top 23 most viewed news videos related to Jackson. And while some clips were a mix of segments from his memorial, the most dominate was a viral video claiming it was evidence of Jackson’s ghost.

The focus among bloggers was more divided. Sarah Palin’s announcement that she was going to step down as governor of Alaska topped the list, with 14% of the links. Second (at 11%) was a July 5 BBC report about a scientific study suggesting that coffee might contain ingredients that could help reverse problems associated with Alzheimer’s. Third (at 10%) was the memorial ceremony held in honor of Michael Jackson.[1] 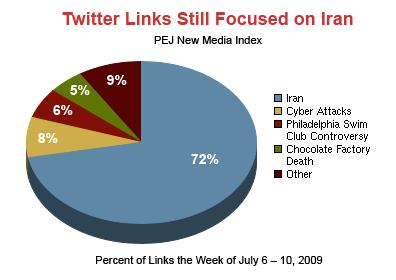 The mixed news agenda in the blogosphere more closely resembled that of the mainstream media last week. There, coverage of Michael Jackson was the top story, accounting for 17% of the newshole studied in PEJ’s News Coverage Index. That was followed by coverage of the U.S. economy (11%) and then discussion of Palin’s decision (7%).

Ever since June 13, when protests in Iran began following the contested election for president, Twitter users focused on news have been consumed with the story. This week, we see evidence of their evolving role.

In the initial week, which dubbed the situation in Iran as the "Twitter Revolution,"  the tweets filled three main purposes: to organize online solidarity with the protestors, to spread instantaneous news about breaking events, and to help fellow twitters make the most of this technology.

Last week, most of the tweets filled a singular role–that of providing breaking news. The transition to information-focused tweets occurred at the same time that it was becoming more difficult to find news of Iran in the mainstream press. Last week, the traditional press devoted just 1% of its overall newshole to Iran compared to 28% the week of June 15-21. For some continuing to follow details of the situation, then, Twitter was likely a primary source of news.

The majority of tweet links went to a news aggregator page called "The Green Brief." Issued on almost a daily basis by an Iranian translator named Josh Shahryar (aka ‘NiteOwl’), the briefs contain quick hits of information gathered through a number of "reliable" Twitter sources.

For example, the July 7 Green Brief detailed alleged atrocities committed against protestors in a village near Kamyaran, a meeting of three leaders of opposition parties committed to invalidating the election results, and word that at least two students from the University of Tehran were still being detained.

Neither the briefs themselves nor the updates contained within them are easy to verify, but enough have linked to them (often accompanied by a tweet message such as "Greenbrief 21 out now" or "Green Brief #21 (July 07) is out") that they seem to have become an accepted source, at least on Twitter.

Another popular story was a July 6 blog on The Daily Beast written by Reza Aslan about plans for a 3-day strike and boycott being organized by opposition leaders.

And from more traditional news (though a source not included in PEJ’s NCI) was a July 8 report from the Guardian that the son of Iran’s supreme leader, Ayatollah Ali Khamenei, had taken control of the militia aimed at crushing the protests.

Unlike Twitter, the blogs featured a more diverse menu of lead stories last week. The most-linked to story, Alaska Governor Sarah Palin’s announced resignation, sparked speculation over why she resigned and what her political future held in store. Among bloggers, much of the discussion fell along ideological lines.

Bloggers from both sides of the aisle linked to a July 5 Los Angeles Times story which contrary to some rumors quoted an FBI spokesman saying that Palin was not under investigation by the agency.

For conservative bloggers, the story was vindication for Palin against unfair accusations.

"The mainstream media and political analysts are all in a quandary," explained It’s My Blog and I’ll Say What I Want To! "Gov. Palin said in her speech that her state has had to spend $2 million defending their state leader from the spurious attacks…There is no mystery. The only reason that the media and the punidits don’t get it, is because they are no used to political figures putting the constituents before themselves…The mystery is why there aren’t more Americans like Sarah Palin."*

"Palin scares the malevolent to death," cheered Pamela Geller at Atlas Shrugs. "Palin is the silver cross to the Democrats’ Dracula…I love her! She is the leader Americans need."

For liberal bloggers, the absence of an investigation did not stop a barrage of criticism.

"so maybe, just maybe, we have to take palin @ her word when she says she just wants to…uh, whatever she said yesterday. play basketball, we think," speculated Skippy the Bush Kangaroo. "she has no ulterior motive for being a quitter, she’s just naturally a quitter. makes sense to us."

Other liberals were shocked to see a USA Today/Gallup poll that showed Palin still had strong support from Republicans despite her surprise announcement.

"Hmm. She writes a resignation speech worthy of an angry high school breakup letter–quits her job because being Governor of Alaska is too hard when people inquire into her ethics–and is in full throat about the mean, mean, media who asks her questions and refuses to swoon when she flutters her eyes and says ‘you betcha.’ And the Republicans like her MORE THAN EVER," quipped Streak’s Blog. "And I am supposed to take this party seriously?"

After Palin, the second-most-popular story was another example of a trend identified among bloggers: noticing and elevating an off-beat, more minor report in the traditional press.

In this case, coffee drinkers were excited to come across a July 5 BBC report about scientists in Florida who had conducted research with mice suggesting that drinking five cups of coffee a day might reverse memory problems seen in Alzheimer’s disease.

"Yet another reason to feel good about my coffee addiction," replied David A. Holland.

Others took the potential impact of the research a bit more seriously.

"Could the solution to Alzheimer’s really be that simple?" asked jobsanger. "We must be careful about making too much of this research. So far, the study has only been done on mice. It might or might not work with humans. We’ll just have to wait and see what the caffeine does for humans when studied…Even so, for us ‘Baby Boomers’, this is a welcome ray of hope."

The list of most-viewed news videos on YouTube last week was overwhelmingly dominated by clips related to Michael Jackson. The top 20 videos, and 22 out of the top 23, all had to do with the passing of the pop star.

While many of the videos were clips from the July 7 memorial service, the top video was of a much different nature. It came from the July 2 Larry King Live program on CNN. A reporter was touring through Jackson’s former estate when a shadowy outline of a figure became visible down the hallway-quickly leading to speculation that the figure was the ghost of Jackson. A clip from that report, which a user had edited with dramatic music, was viewed more than 8 million times by Friday, July 10.

The clip was so popular and the speculation so rampant that CNN later responded to the mystery. Producer David Theall explained that the figure was not a ghost, but instead most likely a television crew member walking in front of a light.

[1]PEJ’s New Media Index of blogs typically utilizes data collected from two different Web tracking sites, Icerocket and Technorati. This past week, Technorati had technical problems so the blog figures for this week’s NMI are based solely on daily figures from Icerocket.