Two major celebrities—one in the entertainment industry, the other in politics—drove the news agenda last week, according to the Pew Research Center’s Project for Excellence in Journalism.

For the second in week a row, the fallout from the death of pop singer Michael Jackson was the week’s top story. It filled 17% of the newshole from July 6-12, due in large part to the star-studded July 7 memorial service viewed on TV by an estimated 31 million Americans. Meanwhile, the No. 3 story last week (7%) was the continuing chatter over the July 3 resignation of Alaska Governor Sarah Palin, who may now be a cultural figure as well as a political one.

Together the Jackson and Palin storylines accounted for about a quarter of the coverage last week, as measured by PEJ’s weekly News Coverage Index, which monitors the coverage in 55 different media outlets. Those two stories, indeed, generated more attention than three events that might fit a more traditional definition of news. The ongoing economic crisis, the skirmishing over health care legislation and President Obama’s Moscow summitry combined to fill 22% of the weekly newshole.

Since June 25, the day on which he died, the Jackson saga has dominated the news, accounting for more than twice the coverage of the next biggest story, the economy. And that level of attention has remained remarkably consistent—17% last week compared with 17% from June 29-July 5 and 18% from June 22-28, although that first week’s coverage was packed into a 72-hour window after his death.

And once again, the Jackson story was primarily a television event last week. Cable and network news each devoted 28% of the airtime studied to the story. It was a particularly hot topic on the network morning shows, where it filled 43% of the a.m. newshole studied—the first half hour of those broadcasts.

Palin’s resignation proved to be fodder for the politically oriented talk show circuit. Questions about her motives and future plans—along with widely divergent opinions of the governor—filled 19% of the airtime studied last week on the 13 radio and cable news talk shows in the News Coverage Index.

One common element linked coverage of both Jackson and Palin. The media themselves became part of the story. Some of the Jackson narrative included questions about whether the press had gone overboard in lavishing so much attention on an entertainer, who among other things, once faced charges of child molestation. The Palin storyline featured a theme that she herself has pushed—from the outset of her appearance in the campaign and around her resignation—that an unfair and unfriendly media corps has hounded the governor and her family.

The King of Pop: The Memorial was the Message

Coverage of the Jackson story has gone through several stages. Initially, there was the outpouring of grief, shock and tributes in the wake of his death. Then the storyline shifted to the more troubling aspects of the story—roughly two-thirds of the Jackson narrative from June 29-July 5 was about the brewing battle over his estate and children and the causes of his death, including speculation and reports of drug abuse.

Last week, the story changed course again, with attention to the daytime Staples Center memorial service accounting for about two-thirds of the coverage for the week. (Most TV networks with news operations covered the event live. Only a small portion of the live coverage of that service occurred during the normal time period measured in the NCI and thus is included in this report. Hence the level of media attention to the event was even higher.) Beyond the sheer magnitude of coverage, the event generated some impressive statistics.

“It cost the city of Los Angeles four million dollars in overtime and other services, seventeen thousand fans had tickets for yesterday’s event, some thirty-one million people watched it on TV…a big number” reported Shepard Smith on his July 8 Fox News Channel show. That 31 million, Smith added, was slightly smaller than the audience (33 million) for Princess Diana’s funeral a dozen years earlier. But those numbers 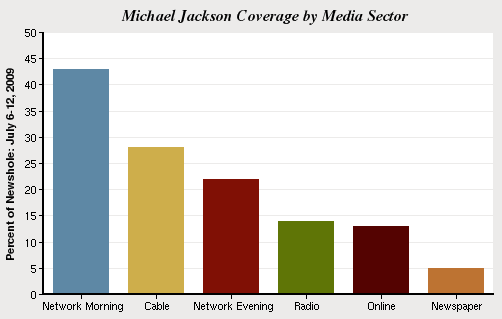 For some, the Jackson memorial sparked a debate about whether the media fascination with the singer was overstaying its welcome. Liberal radio talk host Randi Rhodes, a Jackson fan, called the coverage an “endless grief loop” and pined for a change in news priorities. “I want things to get back to normal,” she added, “because his death has resulted in us ignoring most of the world for most of the past couple of weeks.”

The memorial overshadowed, but did not completely overwhelm other aspects of the story. About one-quarter of the Jackson narrative last week still focused on such issues as the cause of death and the potentially tangled legal battle over his estate.

The complicated state of Jackson’s finances were highlighted in a July 6 Los Angeles Times story. “Michael Jackson was one of the most famous people on Earth and also one of the most famously broke.  [He] came within days of losing Neverland Ranch to a foreclosure auction last year, and he died owing more than $400 million to various financial institutions,” the piece noted before adding that even so, his “assets outweigh his debt by at least $200 million, according to people knowledgeable about his business holdings.”

The growing mystery about the role drug abuse may have played in Jackson’s death was fueled by an interview with his father that aired July 8 on ABC’s Good Morning America. While acknowledging that “I didn’t know anything about the drugs,” Jackson said, “I just couldn’t believe what was happening to Michael,” when he was informed of his fatal cardiac arrest. “I do believe it was foul play.”

While the investigation into Jackson’s death will no doubt continue to generate headlines for some time, the fact that formal tributes are now largely over—and this week’s start of the Sonia Sotomayor Supreme Court hearings—may conspire to finally push the King of Pop off the top of the news agenda.

A week after her July 3 resignation announcement, speculation about the how’s and why’s of Sarah Palin’s decision continued to be a hot topic—particularly on the talk shows. In talk radio land, Palin was the No. 1 topic, accounting for 21% of the airtime studied. On the prime-time cable talk shows, she was No. 2 at 17%, trailing only the Jackson story.

Some of last week’s coverage consisted of more head scratching about the reasons for the decision. A July 6 ABC News story posted on Google News referenced the “many lingering questions” about the move. “On many blogs…speculation ran rampant that a scandal is coming or that another shoe will drop. But no evidence of anything more than rehashed rumors has appeared so far.”

In addition to the Palin guessing game, some of the narrative defaulted to a more polarizing and politicized view of the former vice-presidential candidate, with critics attacking Palin and supporters attacking the media.

On his July 8 MSNBC show, liberal Keith Olbermann declared that, “It appears to be Governor Palin’s main activity…even with two full weeks left in office—posting to her Twitter page.”

On his July 6 radio show, conservative Sean Hannity trained his guns on the press treatment of Palin, declaring it “a media…onslaught” and “media bashing” of the governor.

“Of all the lines of argument concerning her resignation as governor,” he declared, “there was none more disingenuous than ‘well, she abandoned her post.’” Citing another commentator, Hannity noted that various politicians had left office early, including Obama who didn’t serve out his term as Senator when elected president.

Not only is Palin an endless source of fascination for many in the media, she is something of an ideological Rorschach Test—even more than three years out from the next presidential election.

“The negative but sustained passion being expressed by the professional Washington political class against her tends to belie its almost unanimous assertion that she is washed-up,” wrote Washington Times columnist Tony Blankley.

Beyond celebrities, there was some other news last week. The No. 2 story was the economy, at 11% of the newshole. (It was also the second-biggest story, at 10%, the previous week.) And once again, that story led the newspaper sector (16%), the media platform that consistently devotes the most attention to the ongoing financial crisis.

The biggest component of the economic story last week, accounting for about one-third of the coverage, was a renewed focus on the effectiveness—or lack thereof—of the Obama administration’s $787 billion stimulus package. And that included a growing debate over whether a second such measure might be necessary.

“Five months after Congress approved a massive package of spending and tax cuts aimed at reviving an ailing economy, the jobless rate is still climbing and the White House is scrambling to reassure an anxious public that President Obama’s prescription for economic recovery is on the right track,” stated a front-page story in the July 8 Washington Post. “Back in Washington, senior Democrats on Capitol Hill were nervously contemplating whether additional government stimulus spending may be needed to pull the nation out of the worst recession since the 1930s.”

That storyline coincides with the stock market stalling out, and a recently released survey by the Pew Research Center for the People & the Press in which 41% of Americans said they were hearing mostly bad news about the economy these days compared with only 31% 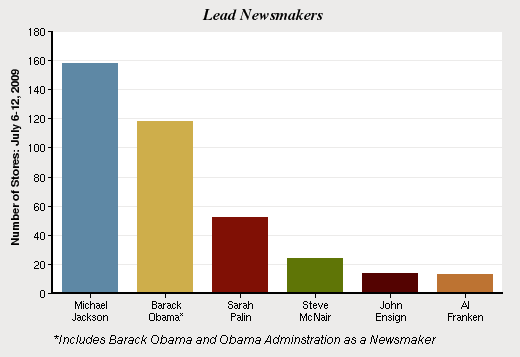 back in May. Last week’s narrative raising doubts about the stimulus may play into those sentiments.

The week’s fourth-biggest story, (6%) involved the continuing debate over health care reform taking place largely in Washington. Next, also at 6%, were the high-stakes meetings between Obama and Russian President Dmitry Medvedev and Prime Minister Vladimir Putin. When coverage of the Russian meeting is combined with attention to the G-8 Summit and Obama’s visit to Africa, the President’s entire overseas trip accounted for 12% of the newshole last week.

Even a summiteering President Obama could not compete with the headline generating power of the Michael Jackson story last week.

For the third week in a row, Jackson was a lead newsmaker in more stories (12%) than the President (9%)—although that margin is down from the previous week when the pop star was a lead newsmaker in more than three times as many stories as Obama. Jackson is the only figure to have nudged Obama from the top of the news agenda for more than a single week since the inauguration. The only other individual who generated more weekly coverage than Obama was Supreme Court nominee Sonia Sotomayor, whose confirmation hearings begin this week.

The No. 3 newsmaker, perhaps to no one’s surprise, was Palin (4%). She was followed by former NFL quarterback Steve McNair (2%) who was killed in what has been called a murder-suicide perpetrated by the 20-year-old woman he was having an affair with.

The fifth-leading newsmaker (1%) was Nevada Senator John Ensign whose admission of an extramarital affair with a former staffer was complicated by the news that his parents had paid that woman’s family about $100,000.