Economy Up and Flu Down in a Stressful Week 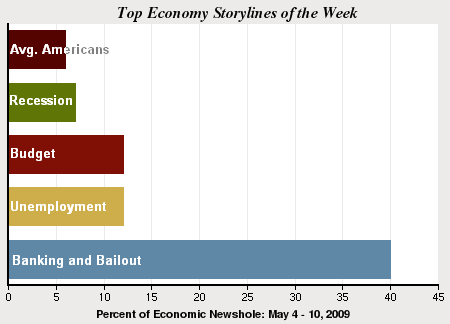 The release of the financial health reports of 19 major banks helped make the economic crisis the top story from May 4-10, according to the Pew Research Center’s Project for Excellence in Journalism. The economy’s health filled 21% of the newshole studied in PEJ’s weekly News Coverage Index during the week. That’s double the coverage of the previous week and the most attention the financial meltdown has received in the 55 media outlets included in the NCI in six weeks. Two related subjects, the President’s plan to crack down on overseas tax havens and the troubled auto industry, filled about another 8% of the newshole.

Conversely, coverage of the swine flu outbreak—while still the No. 2 story at 9%—plunged by more than two-thirds last week as evidence suggested the virus was less severe than previously feared. The previous week, the potential for a pandemic had overwhelmingly dominated the news agenda, accounting for 31% of the coverage and crowding most other subjects out of the headlines.

With its new name, H1N1 rather than swine flu, the global health threat had to share attention last week with some overseas national security threats. The volatile situation in Pakistan, where that nation’s military battled the Taliban, was the No. 3 story, at 5%. But the conflict in neighboring Afghanistan accounted for an additional 3%, while Obama’s May 6 meeting with the leaders of Afghanistan and Pakistan filled another 3%. That brought coverage of what some in the media and Washington are now calling the “Af-Pak” crisis—depicted by the administration as one inextricably intertwined geopolitical challenge—to 11% of the week’s newshole.

Still, it was the fragile state of the economy that re-emerged as the dominant story last week—with several caveats. The level of press attention still pales in comparison to earlier in the year. (In the first two months after Obama’s inauguration, the subject filled 43% of the newshole.) And to some extent, economic coverage is pegged to specific events and milestones—such as last week’s release of the bank stress tests. When such signposts emerge, media interest seems to spike. When there are not such visible measures of economic health, tracking the state of the economy becomes more difficult for the media, more of a subterranean slog.

Coverage of the financial meltdown rebounded last week as Americans learned more about the troubled banks that had been at the heart of the crisis. Close to half of the May 4-10 economic coverage (40%) focused on the financial sector, with the stress tests proving to be the major newsmakers.

The administration’s strategy for publicizing the crucial test results seemed to be a carefully orchestrated set of leaks designed to minimize any serious outbreak of adverse reaction to the news that 10 of the 19 major banks needed more money. And the media narrative picked up on that strategic rollout theme.

“The results of the bank stress tests have been trickling out for days, from Washington and from Wall Street, and the leaks seem to confirm what many bankers feel in their bones: despite all those bailouts, some of the nation’s largest banks still need more money,” said the front-page story in the May 7 New York Times.

“The drip drip of news about which big banks are strong and which are weak finally ended today,’ declared ABC correspondent Betsy Star

k on that network’s evening newscast.

The general tone of coverage of these results was, if not cheerful, certainly not gloomy.

“The results so far seem to suggest that the 19 institutions that underwent these exams will need less than $100 billion in additional equity to cope with a deep recession, far less than some investors had feared,” the Times story noted.

In her ABC report revealing that the banks needed an additional $75 billion in capital, Stark noted the White House view that making the results public would alleviate some fears about the banks that had proven to be “a serious drag on the economy.”

“With these stress test results today, the administration believes it has taken a decisive step toward restoring public confidence and putting the banks on more solid footing,” she said.

Recently, the news about the economy has been noticeably less grim and more mixed, with evidence of that again last week. In a segment on the March 5 edition of PBS’s NewsHour, two analysts cited several reasons for at least guarded optimism.

Discussing the rebound in stock prices, investment analyst Hugh Johnson said, “A lot of indicators that tend to tell us where the economy is going are starting to improve.”

Greg Ip of the Economist magazine asserted that, “the housing market, where all this trouble began, is actually showing signs…of creeping upwards a little bit…Consumer spending actually rose in the first quarter.”

Ip also cautioned that better economic news should be seen in the broader context of a major recession. “It felt really terrible,” he said. “It’s just not quite as terrible as it was.”

The moderating of that once terrible economic storyline may be one reason why coverage of the financial crisis has generally decreased in recent weeks. Another possibility is that there are fewer big newsmaking events—such as the stimulus bill, the TARP package and the budget proposal—fueling coverage these days. But last week, at least, the stress test results proved to be one of those handy media news hooks—and coverage moved to its highest level since late March.

One measure of the decreasing urgency of the swine flu story last week was the big drop-off in television coverage. On cable news, with its tendency to focus on the most dramatic events of the day, May 4-10 coverage fell to 3% after filling 34% of the time studied the previous week. On broadcast network news, the media sector that PEJ’s analysis finds generally pays the most attention to health stories, attention plunged to 10% from 43% th

With Mexico re-opening its public places and U.S. schools advised that it was not necessary to close when swine flu cases are found, the quantity of coverage was down last week and the tone was less alarmist and frantic.

“The U.S. government is cautiously optimistic that the H1N1 influenza virus is more mild than was first thought, new Health Secretary Kathleen Sebelius said on Tuesday,” read the May 5 Reuters story posted on Google News. And while media accounts continued to track the virus’ spread around the globe and many reports cautioned that it could still emerge in a more virulent form, press interest waned substantially last week.

On the other hand, coverage of the deteriorating security situation inside Pakistan increased five-fold last week (from 1% the previous week) as government troops launched a major attack on Taliban forces in the Swat Valley. And the growing violence and instability inside the nuclear-armed nation became a significant storyline.

A May 6 story on NPR’s Morning Edition stated that Pakistan now “looks to be the more urgent problem for the United States” than Afghanistan, where U.S. troops are currently fighting.

The report featured special envoy Richard Holbrooke’s statement to Congress that “our goal must be unambiguously to support and help stabilize a democratic Pakistan.” To which New York Congressman Gary Ackerman responded: “Let me be blunt. Pakistan’s pants are on fire [and] Pakistan’s leaders…seem convinced that if left alone, or attacked piecemeal, the Islamicist flame will simply burn itself out. That hope is, at best, folly.”

Coverage of the conflict in Afghanistan, where U.S. forces are directly confronting the Taliban, was the sixth-biggest story of the week, driven largely by reports that a large number of civilians had been killed in American air strikes. And Obama’s mid-week meeting—in which he reportedly urged Afghani President Hamid Karzai and Pakistani leader Asif Zardari to wage a more aggressive campaign against militants—was the No. 7 story.

All told, combined coverage of events related to the fighting in Afghanistan and Pakistan would have made it the No. 2 last week behind only the economy. And that represents almost a quadrupling of the coverage (3%) the two countries generated in the first four months of the 2009.

Barack Obama was easily the top newsmaker last week, featured in 8% of the stories from May 4-10.  But that represents his lowest level of weekly coverage since he was inaugurated in late January. 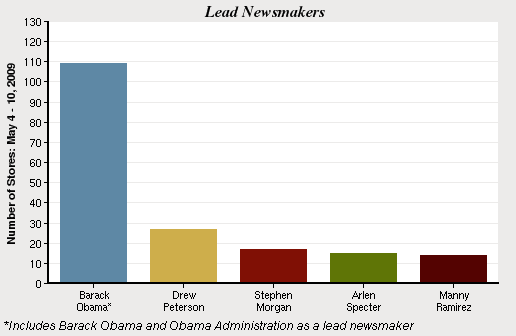 And in a week when no one else registered in more than a small fraction of the stories, most of the top newsmakers made headlines for alleged crimes and wrongdoing. No. 2, at 2%, was Drew Peterson, the ex-police officer charged with murdering his third wife. The No. 3 newsmaker, at 1%, was Stephen Morgan, the man suspected of killing a Wesleyan University co-ed in what may have been a crime with anti-Semitic overtones.

Generating almost as much coverage as Morgan was the star player who ran afoul of baseball’s drug policy. Dodger slugger Manny Ramirez was suspended for 50 games after testing positive for a banned female fertility drug, a substance that some reports suggested could have links to steroid use.

The other top newsmaker, party switching Pennsylvania Senator Arlen Specter (No. 4 at 1%), could be considered either a villain or a hero depending on one’s political perspective.