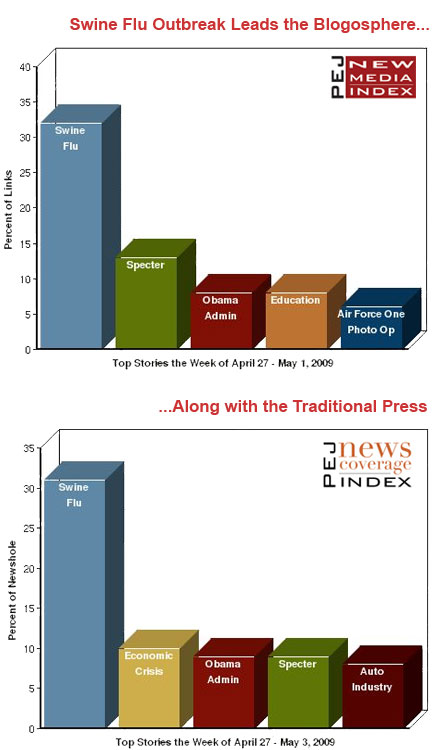 "Tempest in a teapot, or gather the guns and bottled water and head for the hills?" asked the blog Lawyers, Guns and Money about the true extent of the public health threat posed by the virus commonly known as the swine flu.

Bloggers and social media last week got swept up in the breaking news story-to a degree nearly identical as that in the mainstream press. Almost a third (32%) of the links by blogs and social media sites from April 27-May 1 focused on the issue, according to the New Media Index from the Pew Research Center’s Project for Excellence in Journalism, as did 31% of the week’s coverage in the mainstream press.

But while coverage in the mainstream press ranged widely from the threat of a pandemic to the latest count of known cases to the Vice-President’s controversial public remarks, commentary inside social media was more narrowly focused. Attention there mainly sounded alarm bells over the outbreak or focused on whether the issue was being overblown.

After the flu, the most talked about topic (at 13% of the links) was Pennsylvania Senator Arlen Specter’s defection to the Democratic Party. Few bloggers of either political persuasion offered support for Specter himself, but many Democratic bloggers used the opportunity to criticize what they saw as the GOP’s waning influence.

And for the press attention paid to President Barack Obama’s 100-day anniversary, one article in particular caught the attention of social media, accounting for 8% (third in rank) of all links studied. It was an April 25 piece in the New York Post entitled "100 Days, 100 Mistakes" which chronicled criticisms of actions taken by the Obama administration. Prominent conservatives such as Glenn Beck, Dana Perino, and Joe Scarborough contributed to the list of Obama’s "mistakes."

Rounding out the top five most linked to items were a New York Times op-ed by chairman of the religion department at Columbia University Mark C. Taylor declaring that American graduate education is deeply flawed and reports of a low flying jumbo jet that startled many New Yorkers.

Three of the week’s top-five stories matched up in both the mainstream and social media-the swine flu saga, the focus on Obama’s first 100 days (which accounted for 9% of the traditional press coverage) and the Specter move (also 9%). The other top mainstream news topics were the economic crisis (10%) and the troubled U.S. auto industry (8%).

These are some of the findings of the PEJ’s New Media Index for the week of April 27-May 1. The index is an effort to monitor the content appearing in new media platforms. The biggest element of this Index is what appears in the more than 100 million blogs and other social media web pages concerned with national news and public affairs tracked by two monitoring sites, Technorati and Icerocket. Both track the commentary online by identifying what news stories bloggers and other websites link to. Each weekday, PEJ captures the top linked-to stories and analyzes their content. It then compares those findings with the results of its weekly analysis of more mainstream media, the weekly News Coverage Index. The Project also tracks the most popular news videos on YouTube each week.

As last week began, news of the spreading flu virus overwhelmed media outlets and the posts of bloggers. Much of the initial reaction in social media stemmed from reports such as an April 26 story on CNN.com about preparations by the U.S. to handle a potential epidemic.

"I’m not one to buy into mass hysteria, but I am AFRAID of this swine flu," admitted mooneyshine. "I ain’t landing in the hospital with no pig virus. Suddenly Piglet is not so cute anymore."

"Swine flu is getting really serious," warned Dr. Joe Kim on his blog Medicine and Technology. "There are now 20 confirmed cases of swine flu in this country… Let’s hope and pray this gets controlled quickly."

And when the BBC created a page for visitors to share their own story regarding the swine flu outbreak, and the New York Times reported that the U.S. had declared a public health emergency, concern grew even further.

"Reports from news sources outside the mainstream American press…are indicating that the deaths from the swine flu outbreak in Mexico are much higher than are being reported," declared Fallenmonk. "The WHO and other public agencies are trying to keep a nice ‘face’ on this but methinks it may be worse than what we are being told."

While some bloggers sounded loud alarm bells, others responded to the outbreak with sarcasm and blamed the media for overplaying the problem.

"I miss the days of dead-pan, responsible reporting," reminisced Checks with Chart. "Is this flu problem an issue? Certainly. But is it a ‘global pandemic the likes of which may bring about the apocalyspe!!!!?!?!??!’ Probably not."*

"Now more than ever don’t go around hugging and kissing random elementary schoolchildren, or pigs, in Queens," quipped Max Silvestri at Gawker.

Those who felt the issue was being overblown pointed to an April 28 story on CNN.com that tried to put the issue into perspective, showing how the ‘regular’ flu kills an average of 36,000 deaths to Americans each year.

"The whole Swine Flu thing? I think it’s media-hyped hysteria, frankly, unless they’re not telling us something," wrote messygoat. "And honestly.13,000 deaths from complications from regular influenza SO FAR in 2009… and we have ONE death from Swine Flu in the United States, hundreds worldwide, and two suspected cases 15 miles away and they shut down the schools in the entire county? Really??"

"As far as I am concerned, swine flu is nothing more than a different source of the flu," posted The Blue Flag. "Sure, it’s a complication, and it’s something that needs to be fixed. However, let’s not act like it’s Spanish influenza all over again – 90 years and a whole hell of a lot of medical technology separate us from then and now."

When Arlen Specter announced on April 28 that he was leaving the Republican Party to become a Democrat, partisans on both sides reacted quite differently as one might have predicted. Neither, however, seemed particularly enamored of Specter himself.

For Democrats, most of their comments were not in support of Specter, but were aimed at showing what the move said about the state of the Republican Party.

"Specter is center-right, and he’s made clear that the GOP is no longer hospitable to him," summarized Markos Moulitsas at his liberal blog Daily Kos. "Sure, his party switching is rank opportunism at its worst, but he was forced to do it because his party moved far to the Right….Their [the Republicans’] brand of conservatism is of the "far-right" variety, grossly out of step with the American (and Pennsylvania) mainstream."

"On one hand, this is clearly a PR coup for we Democrats," explained Kevin C. Murphy at Ghost in the Machine. "The country didn’t really need another reminder that the Grand Old Party has degenerated badly in recent years, but this can’t help but make the point crystal-clear once again. When even a guy like Specter wants nothing to do with you, that’s saying something."

Most Republican bloggers, on the other hand, suggested the problem was with Specter, not the party.

"The cynical, self-serving move by Specter had absolutely nothing to do with values, policy, or any high-minded thinking of any kind," wrote a commenter on the blog Opinionated Catholic. "With all due respect, Senator- don’t let the door hit your butt on the way out. Nobody on our side’s going to miss you."

And when moderate Republican Olympia Snowe wrote an April 28 op-ed in the New York Times expressing her regret that the party was no longer friendly to middle-of-the-road politicians, some Republican bloggers took issue.

"What she [Snowe] fails to understand is that it is the moderateness of the party is what has lead to our loss of seats," replied Andy at Residual Forces. "Out of control pending, corruption, and unaccountability are what has led us to the minority, with a smattering of war fatigue…Well, in Specter’s case, he is dead to me. If he is upset about the Republican party realizing it is supposed to at least try to stand up for what it tells its base it supports, why’d he decide to join the party that is as equally ‘extreme’?"

The most popular news video last week had nothing to do with the weighty events topping the news agenda. Instead it featured a news report about an embarrassing problem experienced by a fast food joint. A Popeyes restaurant in Rochester, NY, was participating in a one-day special deal on fried chicken only to run out before dinner time. The story featured a number of irate customers who couldn’t believe that the restaurant, which is famous solely because of its chicken, would not have enough on-hand to meet the consumer demand.

"I think that’s bad because I’m sure hungry," said one disappointed customer, apparently summing up the feelings of many

Views on Race in America

5 facts about blacks in the U.S.