How the President Fared In the Press vs. Clinton and Bush 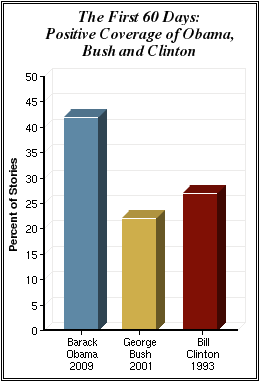 As he marks his 100th day in office, President Barack Obama has enjoyed substantially more positive media coverage than either Bill Clinton or George Bush during their first months in the White House, according to a new study of press coverage.

Overall, roughly four out of ten stories, editorials and op ed columns about Obama have been clearly positive in tone, compared with 22% for Bush and 27% for Clinton in the same mix of seven national media outlets during the same first two months in office, according to a study by the Pew Research Center’s Project for Excellence in Journalism.

The study found positive stories about Obama have outweighed negative by two-to-one (42% vs. 20%) while 38% of stories have been neutral or mixed.

When a broader universe of media—one that includes 49 outlets and reflects the more modern media culture of 2009, is examined, the numbers for Obama’s coverage are similar, though somewhat less positive and somewhat more negative. In this expanded universe of media—which includes news websites, additional regional and local newspapers, plus cable news, network morning news, and National Public Radio, 37% of Obama’s coverage has been positive, 40% neutral and 23% negative.

Several factors may be at play in the favorable tone Obama has received during these first months. One element is the pace and sweep of Obama’s activities. Bush and Clinton both started their presidencies pursuing policy agendas much more of their own making than Obama has. But the data suggest the current president has managed the media narrative anyway by responding to the economic crisis with so many new proposals and doing so many events that it has been hard for both his critics and the media to keep up.

Another factor may be the media reflecting, and in turn, influencing public opinion. President Obama at this point in his presidency is more popular than were either Bush or Clinton. [1] Past studies have shown a recurring pattern of press coverage tending to follow favorability ratings.

Obama also entered office with a stronger popular mandate than either of his two predecessors. He is the first President since George H.W. Bush in 1988 to be elected to his first term with more than 50% of the popular vote. He also succeeded a president leaving office with historically low favorability ratings.

Finally, those who see the press as ideologically motivated toward liberals will likely see that phenomenon as a factor here as well. 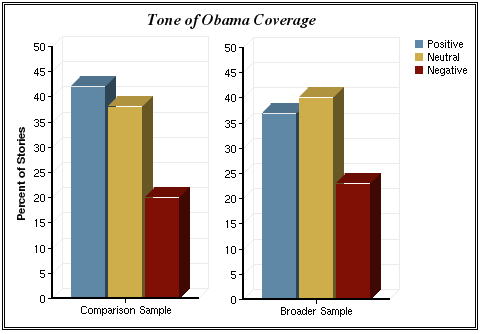 Among other differences, the tone of Obama’s coverage has also proven to be more consistent over time than his predecessors’. Sixteen years ago, Bill Clinton stumbled badly his first month in office and then began to recover; George Bush started well in the press and then began to see his coverage become more skeptical as his policy agenda rolled out, often to substantial controversy. Obama, by contrast, while he has had good weeks and bad in the media, has shown a capacity to recover from the rough ones by changing tactics and redirecting the narrative.

These are a few of the findings of the new study, which compared coverage of the first 60 days of the Obama Administration to coverage in the same outlets during the same time period in the first days of the Bush Administration and the Clinton Administration. The comparative component of the study includes an examination of 1,261 stories in two national newspapers, the three commercial network evening newscasts, a prominent newsweekly and the NewsHour on PBS.

Among the findings in the study:

This study was designed to examine how the press assessed the new president, to break down the basis of those assessments and to compare this early period with both Clinton and Bush.

To accomplish this, the study examined the following:

1.    How many stories were done?
2.    What was the basic topic of each story?
3.    What underlying area of the presidency was the story assessing—was it the president’s leadership abilities, his ideological agenda or his personal character?
4.    What was the tone of the coverage—neutral/balanced, demonstrably positive or demonstrably negative?
5.    What narrative frame was the story built around—conflict, explaining policy, explaining tactics, a reality check, etc.?
6.    What political relationship did the story focus on—the president’s relationship to his staff, to members of Congress, to the office, to interest groups, to citizens?

Stories that were very short—under 30 seconds on television and under 100 words in print, were excluded.

1. Pew Research Center for the People & the Press, “Obama at 100 Days:
Strong Job Approval, Even Higher Personal Ratings Better Ratings for Foreign Policy than
Domestic Issues,” April 23, 2009. Obama’s approval rating at roughly the 100 day
mark was 63%, compared with 56% for George W. Bush and 55% for Bill
Clinton.

Next: Total Amount of Coverage Next Page → ← Prev Page