The public interaction from Oba 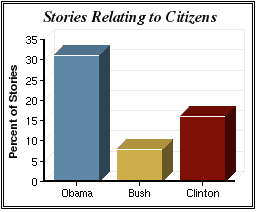 ma comes through in another element of the coverage—the stakeholders with whom the president was associated in stories. The President’s grassroots appeals and activities have been clearly reflected in the press.

Overall, Obama stories were roughly twice as likely as Clinton stories and four times as likely as Bush stories to deal with the president or his actions in relation to the American people.  About three in ten stories (31%) during the first two months of Obama’s presidency tied his actions to the people—more attention than any other sub-group received. This compares to 16% of Clinton’s coverage in 1993 and 8% of Bush’s coverage in 2001.

Much of this stemmed from Obama’s personal trips to Middle America where he personally met with citizens. One such trip was to Elkhart, Ind. on February 9 to show how real people were suffering from the economic crisis. “We’re not just talking numbers, we’re talking about Ed, we’re talking about people in the audience here today,” quoted World News Tonight’s report on the trip. “I know that the new overpass downtown,” continued Obama, “would make a big difference for businesses and families right here in Elkhart. 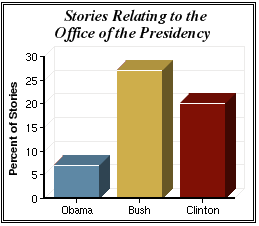 The Situation Room that same day, ran a different clip, but with the same connection to citizens there. “You didn’t send us to Washington because you were hoping for more of the same; you sent us there to change things, the expectation that we would act quickly and boldly to carry out change and that’s exactly what I intend to do as president of the USA.”

In contrast, there have been far fewer stories focusing on the office of the presidency itself, such as his approach to long-standing traditions or the reputation of the office. Just 8% of the stories related primarily to these subjects. That is less than a third of the attention (27%) seen in 2001 after Bush took office and less than half that (20%) in the Clinton launch.

Unlike President Bush, who spoke publicly of efforts to restore dignity to the office, the Obama team has focused little on the title or the office itself. Instead, it has actively worked to put the focus outside the office, outside of Washington and inside the communities of American citizens.

Next: News vs. Opinion Next Page → ← Prev Page