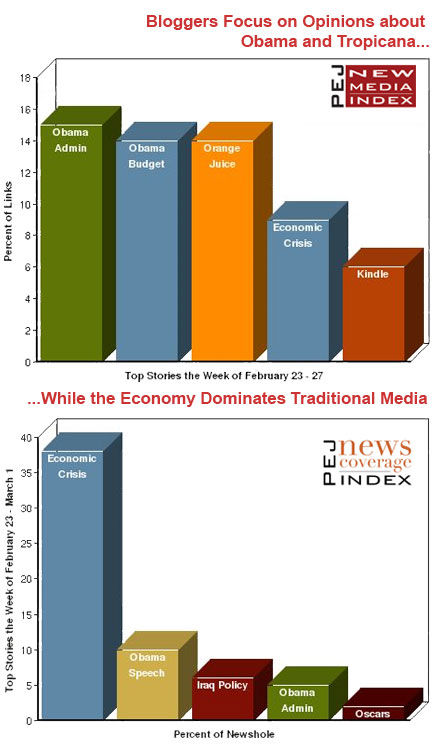 Even as bloggers kept a sharp eye on events in Washington, the new media agenda-for the second week in a row-flexed its muscle on a hot-button consumer issue. And the week’s top videos included a celebrity who was allegedly beaten followed by a commentator beating up on the President.

Barack Obama remained the dominant figure in the blogosphere last week, with heated debate over his success or lack thereof so far in office. But almost as much passion erupted online over the launch and then cancellation of new packaging for Tropicana orange juice.

Obama was the central figure in two of the three most linked to stories by blogs and social media sites the week of Feb. 23-27, as found in the New Media Index of Pew Research Center’s Project for Excellence in Journalism. The most frequent postings, at 15% of the embedded links, stemmed from new polls showing strong public support for the President. Following close behind, at 14%, was debate over Obama’s sweeping $3.6 trillion budget proposal.

But just as many postings,  14% of embedded links, featured reaction to the marketing and packaging of one of America’s most iconic drinks-Tropicana orange juice. Many online expressed disappointment in the newly debuted design and then rejoiced when the company bowed to pressure to return to its original version.

The fourth story online evaluated a controversial New York Times column by Paul Krugman that made the case for nationalizing the banks during the current financial crisis. That story made up 9% of the links last week.

That was followed (at 6%) by conversations about the new version of the Kindle, a book-reading gadget from Amazon.com, which received a positive review from David Pogue of the New York Times, but generated criticism from the Authors Guild because the device’s text-to-speech function might keep authors from maintaining exclusive audio rights to their work.

The traditional media, by contrast, were once again far more focused on the economy, according to PEJ’s News Coverage Index. Fully 38% of that newshole was filled by the economic crisis, including how Obama’s proposed budget would impact the economy and the state of the U.S. banking industry. Obama’s February 24 address to Congress accounted for another 10% of the coverage, twice as much as in new media (5% of the embedded links). The only story not related to Obama that made it in the top five for the mainstream press was the Academy Awards, No. 5 at 2%-a subject that garnered little attention in the blogosphere.

These are some of the findings of the PEJ’s New Media Index for the week of Feb. 23-27. The index is an effort to monitor the content appearing in new media platforms. The biggest element of this Index is what appears in the more than 100 million blogs and other social media web pages concerned with national news and public affairs tracked by two monitoring sites, Technorati and Icerocket. Both track the commentary online by identifying what news stories bloggers and other websites link to. Each weekday, PEJ captures the top linked-to stories and analyzes their content. It then compares those findings with the results of its weekly analysis of more mainstream media, the weekly News Coverage Index. The Project also tracks the most popular news videos on YouTube each week.

Supporters of the President were spurred on last week by the release of two polls which showed Obama maintaining widespread public support. On Feb. 23, both a N.Y. Times/CBS Poll and Washington Post/ABC News Poll showed that Obama’s approval ratings were in the mid 60% range.

Citing the high approval numbers, Dana Houle on Dailykos.com wrote, "I’m sure you heard the bloviating, that if Barack Obama didn’t get a bunch of Republicans on board, that the stimulus package would be a failure? That premise was stupid then, and it’s stupid now…Americans see through the Republicans, and blame them for being obstructionists."

"It’s an awfully good sign…that Obama still seems to have such overwhelming public support," reflected Michael Stickings at The Democratic Daily. "The honeymoon may be over – it was short, given the urgency of the economic crisis and the bitter and divisive way the Republicans have handled themselves – but it is impressive that he has been able to keep up that support in the midst of such attacks and with a media establishment, for a time, buying into, and regurgitating, the Republican narrative."

Conservatives, linking to reports in the Washington Post and elsewhere, countered with criticism of the President’s budget proposal-particularly his plan to cut the deficit in half in four years.

"Raising taxes during a recession or even a depression is a plan which has been proven to be a failure," argued Marc Carey at BluegrassBulletin.com. "No one, not even the least involved in politics, can reasonably conclude that raising taxes will help the economy…His plans to ‘cut the deficit’ are a joke.  HE IS the deficit, he just ballooned the deficit, and now his game is to take people’s money, what little they may have left, so he can ‘spread the wealth around’."*

"Add this to the list of ‘Things Not To Do During A Recession,’" declared Jason Pye. "Soak the achievers and give absolutely meaningless tax cuts, $13 dollars a week, to the rest of us while the government continues to plunge us further into debt. Enough with wealth envy and populism. Let’s cut taxes for everyone, cut spending and kill the corporate income tax."

And some suggested that the looming battle over Obama’s budget s could erode his current standing with the public. "Obama ought not squander the largesse of the American public," warned Submitted to a Candid World. "’Wait and see’ easily morphs into frustration and cynicism."

The most noteworthy display of social media outcry last week was linked to the reversal of a marketing and advertising disaster – one that the New York Times compared to the infamous New Coke campaign 24 years ago.

Tropicana Pure Premium orange juice, owned by PepsiCo, changed its packaging design in January. The old symbol of an orange with a protruding straw was replaced with a new image of orange juice in a glass. Despite large amounts of money spent in research and development, many fans were outraged with the change.

As we saw a week ago in bloggers’ reaction to a new policy at Facebook, the social media network quickly let their voices be heard. "A generic knock-off and cheap looking 7-11 esque packing are just two words that have been used to describe the recently unveiled ‘new look’ Tropicana orange juice containers," described Martina Mackintosh at Right Brain, Left Brain.

"Perhaps the past few months when you were out getting your groceries at the local store…you might have found yourself lost while trying to find your favorite Tropicana orange juice," suggested Daniel Licht of From Bogota with Love. "It seems that…PepsiCo decided it was time to reinvent the tride and true Tropicana container. Now when I saw this my first reaction was ‘…What only this generic OJ… where’s my good stuff?’"

Then when the company announced on Feb. 22 that it was returning to the old symbol, many expressed joy and relief.

"Yay!" exclaimed zombieshaun at Media Zombies. "I’m happy about this. I see these new ‘Squeeze’ ads outside everyday when I walk to class, and I can’t stop thinking to myself how much I missed the good ole’ Tropicana look.  While the new ads and packaging, which took 35 million to make, looks great, it doesn’t say ‘fresh orange taste’ like the original did."

The change was described by many as a victory for an expressive minority of devotees who complained to the company about the new design.

"It shows the power of consumers and their ability to (sometimes) effect change when they organize themselves both on and offline," summarized Matthew Chamberlin on Clearcast Digital Media. "Lastly, it has a happy ending because the big company LISTENED and responded… In these turbulent economic times and diminishing brand loyalty, I think it says a lot about Pepsi/Tropicana that they honored the feedback."

The most viewed video last week was of a still photograph from celebrity gossip outlet TMZ which purported to show singer Rihanna after she was allegedly assaulted by another singer, Chris Brown. In the image, Rihanna’s face appears injured. Since then, the two have reportedly reconciled.

The second most viewed video was CNBC reporter Rick Santelli’s now famous Feb. 19 "rant" on the Chicago trading floor when he led the crowd in a display of outrage over Obama’s bailout and housing plans. The video quickly became an Internet favorite although Santelli’s new found fame cut both ways, bringing kudos as well as criticism.

PEJ is launching the New Media Index as a companion to its weekly News Coverage Index. Blogs and other new media are an important part of creating today’s news information narrative and in shaping the way Americans interact with the news. The expansion of online blogs and other social media sites has allowed news-consumers and others outside the mainstream press to have more of a role in agenda setting, dissemination and interpretation. PEJ wanted to find out what subjects in the national news the online sites focus on, and how that compared with the narrative in the traditional press.

While the News Coverage Index is comprised of primarily U.S.-based media outlets, the aggregators of blogs and other social media include both U.S. and non-U.S. blogs. In addition, stories that are linked to can be from non-U.S. sources. However, according to PEJ’s research over the last two months, the only non-U.S. news stories included in the top lists for Technorati and Icerocket have been the BBC (whose Web site is part of the News Coverage Index) and the Guardian.

The Project also tracks the >most popular news video on YouTube each week.