False Rumors that Obama is a Muslim

After appearing on FreeRepublic.com, a self-described forum for “independent, grassroots conservatism,” rumors of Obama’s Muslim roots took on a viral life online, in the blogosphere and in e-mail inboxes. The widespread nature of the rumors became fodder for cable news talk shows as well. 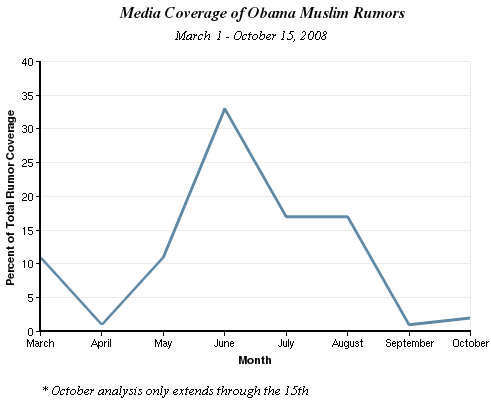 These rumors then found their way into the mainstream media and never fully disappeared. During the general election, nearly a third (30%) of religion-related campaign coverage addressed this topic.

A good deal of the continued attention rested on the Obama campaign’s efforts to set the record straight. One such incident occurred in June when Obama staffers removed two women wearing head scarves from the camera view at a campaign rally. Conservative radio talk show host Rush Limbaugh said the campaign’s move symbolized Obama’s broken promise to “transcend identity politics.” On the June 19 episode of Fox News’ Hannity & Colmes, a video clip quoted the brother of one of the women, who speculated that the Obama campaign “wanted to make sure, in my opinion, that no one will correlate a Muslim girl in the back with him being Muslim.” MSNBC’s Dan Abrams summarized on June 18 that the consensus among pundits was that the incident hurt the candidate.

The Obama team set up a website, www.fightthesmears.com, as a tool to identify and root out inaccuracies about the candidate’s religious background, among other rumors. The June 13 broadcast of ABC’s Good Morning America aired an entire segment on the site and many other outlets also covered the new site.

A controversy over the July 21 edition of The New Yorker magazine is a case in point. The magazine’s cover featured a satirical rendering of Obama in traditional Muslim attire, including sandals, robe and turban. Though the magazine’s editor said the intent of the cartoon was to combat those spreading the rumors – the title was “The Politics of Fear” – its provocative nature drew a good deal of media attention, fueled by the fact that the Obama campaign publicly rebuked the magazine. The week The New Yorker hit newsstands, July 14-20, stories about the cover occupied 10% of the campaign newshole. 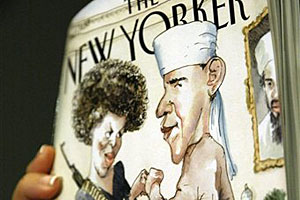 In the end, did efforts by the traditional press to set the record straight strengthen or lessen the impact of these rumors? Press coverage of efforts to curtail circulating rumors or to correct inaccuracies may have added to the overall impact of the rumors in the end. By simply reporting on the rumors’ influence on public opinion, the press heightened their presence in the news.

It is always difficult to identify cause and effect, but the evidence suggests at minimum that the coverage did little to persuade or disabuse those people inclined to believe Obama is a Muslim. In June, the month before The New Yorker cover appeared, 12% of registered voters believed that Obama is a Muslim, according to a survey by the Pew Research Center for the People & the Press. By October, the media’s attention to the rumors had significantly subsided, but polls indicated that their resonance had not. Only weeks before Election Day, the same number (12%) still thought Obama is a Muslim, according to another Pew Research Center survey.

By this time, news audiences were being exposed to voter anxiety over Obama’s religious affiliation in ways that extended to questions of ethnicity, nationality and patriotism. One such instance occurred at a McCain town hall-style meeting. A woman in attendance stood up and voiced her concern about Obama, saying, “I have read about him … he’s an Arab.” McCain removed the microphone from her hand and corrected the woman, saying “No, ma’am. No, ma’am. He’s not … He’s a decent family man, citizen, that I just happen to have disagreements with on fundamental issues.” The incident, which was captured on video, was replayed on network and cable newscasts.

In a much-discussed appearance on NBC’s Meet the Press in which he endorsed Obama, former Secretary of State Colin Powell, a Republican, noted the persistent rumors and offered a way to refute them. “Well, the correct answer is, he is not a Muslim,” said Powell. “He’s a Christian. He’s always been a Christian. But the really right answer is: What if he is? Is there something wrong with being a Muslim in this country? The answer’s no. That’s not America. Is something wrong with some 7-year-old Muslim-American kid believing that he or she could be president?”