For Governor Sarah Palin, her best days in the national spotlight were her first. After being named McCain’s running mate, she quickly became a major part of the campaign narrative, and a positive one as well. When her problems came, as it turned out, she was already largely beginning to recede from center stage.

Overall, for the six weeks studied here, Palin was a significant factor in only half as many stories as the main contenders, or 28% of all of the election stories. That, however, is about three times that of Democratic vice presidential nominee Joe Biden (9%).

That percentage might have been even higher were it not for two factors—the emergence of the economic crisis and the apparent limits of Palin’s impact on the polls. In addition, the campaign strove to shield Palin from the press, granting just two interviews in the weeks following the convention. This likely dampened some coverage but also increased the press impact of the two main interviews granted. 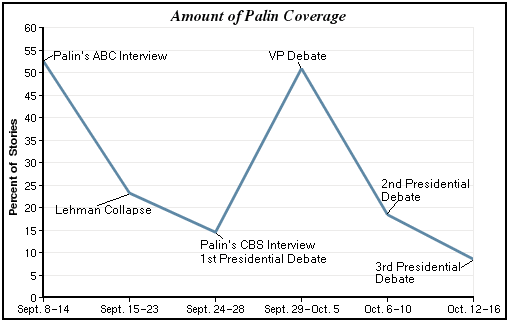 When the general election phase of the race began in earnest, Palin was as important a news figure as the people at the top of the ticket. The week after the Republican convention, more than half (53%) of the campaign stories focused significantly on Palin, more than even her running mate, McCain (50%).

A week later, as the economic crisis took hold of Washington and the two presidential contenders responded, stories involving Palin dropped by more than half (to 23%) of the coverage.

Some might have imagined she would have seen a resurgence with her much-talked-about interview series with CBS anchor Katie Couric. Not so. The week the bulk of those interviews aired (Sept. 24-28), press attention to Palin fell even lower, to 15%.

Part of the further decline was likely tied to the economic crisis and McCain’s dramatic announcement that week that he would suspend his campaign to focus on the proposed economic bailout package. Yet this number may also reflect another phenomenon. Much of the impact of those Palin interviews came from people replaying and emailing them from YouTube and other websites, including CBS’ own. That kind of viral media flies somewhat below the radar of traditional measurements of the news agenda.

Attention to Plain did spike briefly again with the October 2 vice presidential debate. Anticipation for the event was high after even some conservatives criticized her performance in the Couric interviews. Viewership for the Biden-Palin encounter hit record levels. And afterwards there was a fair amount of discussion about whether the Alaska governor had exceeded the lowered expectations. When the week was over (Sept. 29-Oct. 5), Palin was a major newsmaker in more than half (51%) of the coverage—more than any of the other candidates during the period. It was Joe Biden’s high water mark in exposure as well, though he remained far below that of the governor (31%).

Yet in some ways, Palin’s passing the test of the debate seemed to have the effect of reducing her importance as a key player, at least to a degree. She was now less controversial than she had been when there were more acute doubts about her, but she was also receiving less coverage. By the next week (Oct. 6-10), Palin’s presence in the news fell back down to just 18% of the stories and then to a mere 8% by mid-October.

How did Palin fare in the press? In the end, Palin’s coverage was more negative than positive during the six weeks examined. 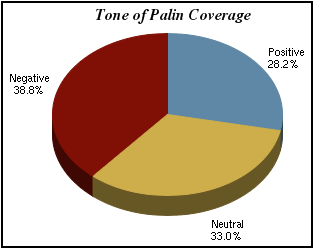 Palin also received slightly more positive coverage than Biden (28% vs. 25%), as well as more negative coverage (39% vs. 32%). Arguably the effect of these differences was more important since the volume of her coverage was triple that of Biden’s.

What was the trajectory? Did Palin, after burning brightly at first, just fade away?

Not really. Instead, what began well for Palin turned negative and then began to bounce more up and down.

Palin’s best week in the press came the week after the GOP convention, when Palin received more positive coverage than McCain, Obama or Biden. During that period, Sept. 8-14, which ended with the candidate’s interview with ABC’s Charlie Gibson, 41% of the campaign stories about Palin painted her in a positive light. McCain was close behind (37% positive), while only 20% of Obama’s coverage was clearly positive. Joe Biden was virtually invisible.

The following week, September 15-23, when the economic crisis exploded into the headlines and changed the campaign dynamic, the tone of her coverage reversed itself: 41% of her coverage was negative versus just 23% positive.
Then it got worse. As the Couric interview aired followed by a related Saturday Night Live skit (and her running mate lost ground on his public response to the economic crisis), fully 64% of the stories about her were negative—about nine times the number of stories that were positive (7%).

Questions about her aptitude for the job, her knowledge of foreign affairs and her negative impact on the race dominated the media. On MSNBC’s Hardball September 29, guest Joan Walsh of Salon remarked, “I thought she absolutely did not understand what was in the bailout . . . It was a complete disconnect.” And Fox News correspondent Carl Cameron observed on the Special Report with Britt Hume that same day that Palin’s foreign policy response, “continues to raise eyebrows.”

Palin regrouped some with the vice presidential debate, though in the days leading up to the event, many strategists questioned the governor’s readiness. The day before the debate, ABC commentator 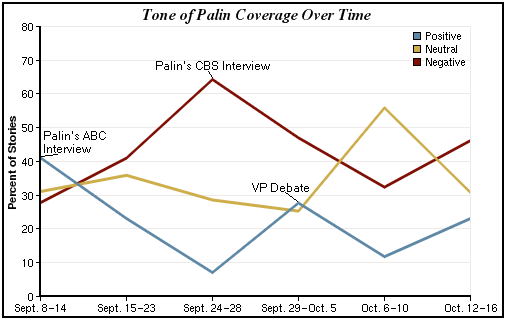 George Stephanopoulos remarked on World News Tonight that the “number of Americans questioning her qualifications, her readiness is steadily rising ….There is no question she’s become a bit of a drag on the ticket so far.”

Palin proved at least some of her skeptics wrong. Linda Feldman of the Christian Science Monitor wrote a story the day after the debate titled, “Could there be two Sarah Palins?” The candidate in the debate, she says, was “articulate, charming, and well-prepared.” Her performance, however, wasn’t enough to even out the tone of the press coverage. The week of the debate (September 29-October 5), negative stories about Palin still outweighed positive, 47% versus 28%, with 25% neutral or mixed. (Biden’s coverage, by contrast, was largely neutral, 53%, and twice as positive as negative, 33% positive versus 15% negative.) The debate helped Palin, but it did not erase the doubts audiences might be seeing in the press coverage.

What the debate appeared to do instead for Palin was help her enter the final days of the campaign with something of a more mixed image in the press, tending toward negative. As the spotlight turned back to the presidential nominees, the majority of coverage about Palin (56%) was neutral or balanced in tone, though negative stories still outweighed the positive, 32% versus 12%.

During the week of the last presidential debate (October 12-16) Palin was virtually absent from the press (just 8% of the election coverage that week), but the coverage she did receive had again moved more negative—46% versus 23% positive and 31% neutral or mixed.

Why did Palin’s coverage become more negative? Was it some scrutinizing look at her personal life such as the choice to run for vice president as a mother of a special needs baby or her personal religious beliefs? Was it reporters heading to Alaska to examine her record in office? Or was it those difficult interviews with Katie Couric?

The findings here suggest they had little to do with the press looking into her personal life or that of her children and husband. There were in the end, very few stories of this nature: a mere 5% overall and the bulk of those came in the first days of the Republican Convention after the revelation that her teenage daughter was pregnant. Along with getting less coverage overall than some might have expected, these stories were pretty evenly divided among neutral (38%), positive (31%) and negative (31%).

Rather, the most negative element in the press treatment of Palin came from reporters examining her record in office in Alaska, and matching that record to her rhetoric as an ethics and financial reformer. Fully 64% of these stories carried a clearly negative tone versus just 7% (two stories in all) positive. Palin was hurt in the media, in other words, when her pronouncements about saying “thanks, but no thanks” to the Bridge to Nowhere turned out to be problematic, and when details were drawn out about her involvement in the so-called “troopergate” story involving her ex-brother in law.

Stories on the governor’s policy stances such as offshore drilling or troop withdrawals from Iraq were mostly neutral in tone, 65%, but were also nearly three times as negative as positive (26% versus 9% positive).

Other political frames such as fundraising and advertisements were similarly negative, 55% versus 14% positive and 31% neutral.

Coverage focused around Palin’s impact on the race was in the end pretty evenly split among positive (34.5%), negative (34.5%) and neutral (31%). Many of these positive assessments about her energizing of the Republican base came early, tracking closely with a boost in public support for McCain. [1] As the strategic promise of Palin’s presence on the ticket faded, however, negative assessments of her effect on the race increased.

Politically, in other words, Palin appeared in the press as a highly polarizing figure, either great for the ticket or terrible.

And what about the two one-on-one press interviews that represented rare press access to Palin? Overall, when it came to the tone of the coverage, the first interview with ABC’s Charlie Gibson proved pretty much a wash for the candidate. Nearly half of the stories studied here were neutral (47%). The remainder was a bit more negative than positive.

The interviews with Katie Couric played out much more negatively. More than half (57%) of these stories were negative versus just 14% that carried a clearly positive assessment.

The Couric interviews themselves got less attention in the mainstream media than the Gibson interview, again, in part, perhaps because so much of their impact may have been occurring in the less measurable world of viral media consumption.

The Gibson interview also was the first, so curiosity was higher. And it occurred before the economic blowout, while the Couric series aired right in its midst, the same week as the bailout summit meeting in Washington. The competition for space in the campaign storyline was much greater.

Whether based on these media interviews, the Saturday Night Live skits or broader press coverage, the public seemed to think that the press was too hard on the newly baptized nominee. In an early October survey by the Pew Research Center for the People and the Press, the public was more likely to say the press had been too tough on Palin than they were on any of the other three candidates. When asked, 38% of those surveyed said the press had been too tough on Sarah Palin, versus 23% who said this McCain and just 7% of Obama.

There is one other note to consider about the Palin interviews with ABC and CBS. Those encounters received more scrutiny in significant part because the McCain campaign appeared to be sheltering Palin from the media, a person who was both electrifying and largely unknown. That led the journalists involved to take special effort to prepare for these interviews and also for their organizations to market them in the media. Thus the decision to limit Palin to just a few interviews with a handful of national media, rather than in more frequent but less fraught encounters with the press may have put her at a distinct disadvantage.

FOOTNOTE:
1. According to the surveys by the Gallup organization, Obama was leading McCain 50% to 42% going into the Republican convention (poll taken August 30 – September 1). Coming out of the convention, McCain had taken a 49% to 44% lead (poll from September 6-8)—a net change of 13 percentage points.