The Arc of the Story

Coverage of the economy, however, did not keep growing. The story subsided in September and October, falling to 2% and 3% of the newshole studied. In September, economy coverage lagged behind wildfires raging in the West. It began to pick up again in November and December as Americans were hit with double punch of rising gas prices and a 0.6% jump in the Consumer Price Index.

But the media really began to focus on the economy in a significant way in the first three months of 2008, particularly starting in late January. As the presidential primaries and caucuses hit full stride, the economy emerged as both a major storyline and the leading public worry. From January through March, the economy filled 9% of the newshole studied, pulling well ahead of the war or any issue other than politics. And the topic remained at a roughly similar level of attention from then on. From April through June, it accounted for 8% of the newshole studied. 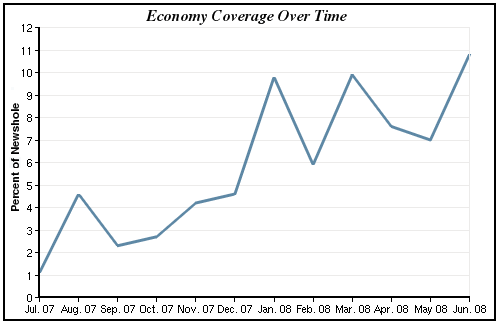 As the story evolved, the narrative in the press—what part of the economy was being talked about—changed fairly significantly. When it began, the economy was primarily a housing story. In the third and fourth quarter of 2007, almost half all the economic coverage (44%) was about housing.

With the new year, the storyline changed. Concerns about problems with the mortgage industry and its effect on housing broadened into something larger. The biggest focus of the coverage in the first quarter of 2008 was now whether the country was heading toward a recession.

The trigger was a series of economic statements. On January 9, the influential investment firm of Goldman Sachs released a report predicting a recession. Federal Reserve Chairman Ben Bernanke publicly disagreed with that assessment a week later. When the federal data on Gross Domestic Produce came out January 30, it showed the economy in the fourth quarter of 2007 had slowed to 2.3%. And the debate was on. For the first three months of 2008, fully 44% of the economic coverage was focused on whether the recession was coming. Housing now accounted for just 18% of the economic story. Rising gas and energy was a relatively small story (7% of the economic coverage). The sudden stock price drop on January 21 made up another 6%. 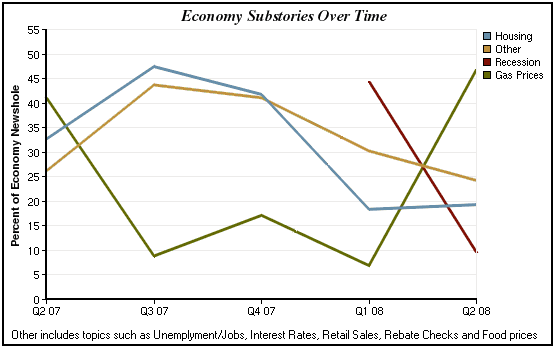 And then the story would change again. At the end of April, the Federal government’s report found the growth rate in GDP had picked up slightly in the first quarter, and with that news, discussion of whether the economy was in recession gave way to something else. Starting in April, the story of the economy became focused more on the price of gas and oil.

From April through June, almost half of the economy coverage (47%) was about rising energy prices, up from just 7% of the coverage the previous three months. The second-biggest element of the story remained housing (at 19%), but it too had taken a turn. The story of defaulting mortgages had evolved into a story more about a crisis in banking generally than mortgages and foreclosures in particular.

The banking storyline, to be sure, had begun earlier in the year. In January, Bank of America had bought the troubled Countrywide Financial, the nation’s largest mortgage lender. In mid-March, the investment banking firm Bear Stearns was on the brink of failure and was bailed out by an 11th hour purchase plan by J.P. Morgan Chase. (This storyline would drag on for months with debates over the price per share). The Bush Administration, in league with Federal Reserve, was also becoming more interventionist in an effort to calm investor fears. On March 12, the government authorized a $200 billion rescue plan for ailing banks. By the second quarter of 2008, other storylines that would loom even larger in the third quarter were beginning to emerge. On May 27, the Wall Street Journal predicted that the Federal Reserve’s intervention in the sale of Bear Stearns was likely to lead to more regulation and oversight by the central bank. By July, that prediction proved true as the government moved to take over IndyMac Bank and to shore up troubled mortgage giants Freddie Mac and Fannie Mae. 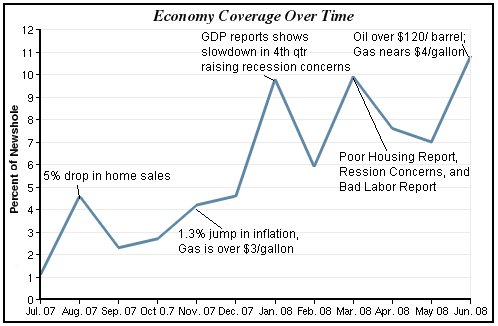 Next: How Coverage Tracked with Economic Events Next Page → ← Prev Page