Through the first 10 months of the year, the portrait of Iraq that Americans have received from the news media has in considerable measure been a grim one. Roughly half of the reporting has consisted of accounts of daily violence. And stories that explicitly assessed the direction of the war have tended toward pessimism, according to a new study of press coverage of events on the ground in Iraq from January through October of 2007.

In what Defense Department statistics show to be the deadliest year so far for U.S. forces in Iraq, journalists have responded to the challenge of covering the continuing violence by keeping many of the accounts of these attacks brief and limiting the interpretation they contain.

And as the year went on, the narrative from Iraq in some ways brightened. The drumbeat of reports about daily attacks declined in late summer and fall, and with that came a decline in the amount of coverage from Iraq overall.

This shift in coverage beginning in June, in turn, coincided with a rising sense among the American public that military efforts in Iraq were going “very” or “fairly well.”

The Portrait from Iraq: Percent of Stories 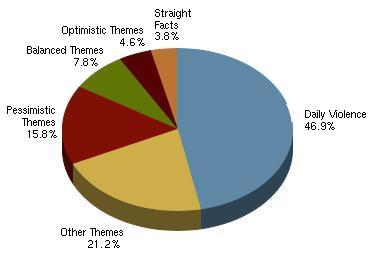 These are some of the findings of a study of more than 1,100 stories from January through October from 40 different news outlets conducted by the Project for Excellence in Journalism, a research institute that examines the press.

The findings suggest, among other things, that the bigger question may be not how the press interprets events but what kinds of events get covered, especially by a press corps whose movements are severely restricted in Iraq by the threat of attack and who are most mobile when embedded with U.S. troops.

The results of the study of the content of Iraq coverage also correlate to a great extent with attitudes expressed by journalists working in Iraq themselves. In a survey released by the Project in November, most journalists said they felt that the operations of the military were thoroughly covered, but they viewed the lives of ordinary Iraqis and the sense of daily life as the most “undercovered” subject. The findings here about what topics were covered tend to confirm the assessment of the journalists on the ground.

Accounts of Violence Over Time 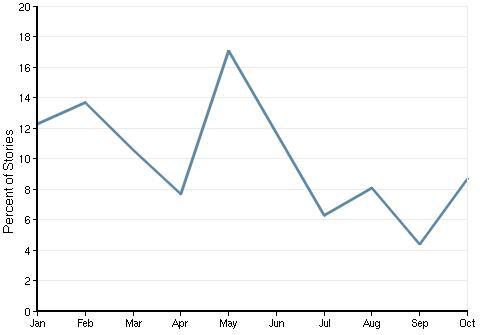 The Project for Excellence in Journalism is a non-partisan, non-ideological research institute that studies the press. It is one of eight projects that make up the Pew Research Center in Washington, D.C., a “fact tank” funded by the Pew Charitable Trusts.