The question of whether voters are well served by coverage is not strictly a matter of what the story is ostensibly about. Any topic may be relevant to helping voters discern differences among candidates. How candidates run their campaigns, for instance, may be a proxy for how they would run the country.

To probe further into this, the PEJ-Shorenstein study tried to isolate whether the information in stories was relevant or not to helping people decide how to vote. One way of doing this is to note who was primarily affected or impacted by the information the story was talking about. We called this measurement impact.

Did the information in the story mostly refer to how candidates might govern, i.e., what they believe in, their values, management style, personality and other similar matters? Or was it about matters that impact the candidates’ or parties’ chances of election? Or did the story deal with both the governance and electoral chances?

A story about tactics and strategy might be produced in such a way that tells a good deal about a candidate, his or her leadership or decision-making style. A story that simply outlines the numbers in a new poll, in contrast, would have to be described as impacting mainly the candidate and his or her campaign. If any useful information for citizens could be inferred concerning substance rather than strategy, the story coding defaulted toward impact on citizens.

Who Stories Impact Most

Percent of All Stories 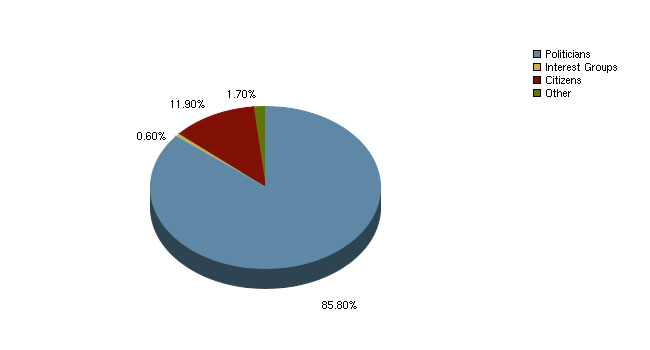 The “impact” analysis showed that the coverage was tilted even more toward strategy than analysis of the topic of the stories.

In the end, just 12% of stories primarily impacted ordinary citizens, for instance. by telling potential voters how a candidate might lead if elected.

By contrast, 86% of the stories were produced in a way that largely focused on how the politicians’ chances of election would be affected.

There is a familiar pattern here. In a PEJ study of the same question in the early 2000 presidential contest, the numbers were remarkably similar, 13% of stories impacted citizens and 82% were about the impact on candidates, the campaigns and the parties. Studies of later periods in the campaign found slightly more citizen focused coverage, though not dramatically so. [1]

These numbers suggest that coverage becomes more citizen-oriented as the election draws closer. It remains to be seen whether that might happen sooner in a campaign that started earlier. So far, the coverage is as focused as usual, if not more so, on what critics call the inside baseball of politics.

It is also important to note that projections of candidate viability and electability are important pieces of information for primary voters, compared with general election voters.In primary elections with several competing candidates, many citizens may not want to “waste” their votes on candidates who have no chance for the nomination or who are likely to lose the general election.

[1]“In The Public Interest: A content study of early coverage of the 2000 election campaign,” December 1999 and January 2000. The study found 13% of the stories impacted citizens by giving them useful information about governance, and 82% impacted the chances of the candidates, the parties, and the campaigns. Later in that race, in the final weeks of the 2000 general election phase, the numbers in another PEJ study were different, though not dramatically so. In that later study of this period, “The Debate Effect: How the Press covered the Pivotal Period,” slightly more than a quarter of stories (27%) impacted citizens’ information needs and 64% focused on the candidates’ or parties. A third PEJ campaign report, “The Last Lap: How the press covered the final stages of the campaign,” issued in the closing weeks of the 2004 race between Bush and John Kerry found that 20% of the stories contained information that related to citizens’ information needs, while 73% were oriented to how the candidates would be affected.

Next: The Competition for Exposure Next Page → ← Prev Page